On 9/11 anniversary, Afghans blame departed US forces for their woes

After a two-decade occupation, U.S. forces abruptly pulled out of Afghanistan last month, triggering the collapse of its Western-backed government and the Taliban's dramatic return to power. 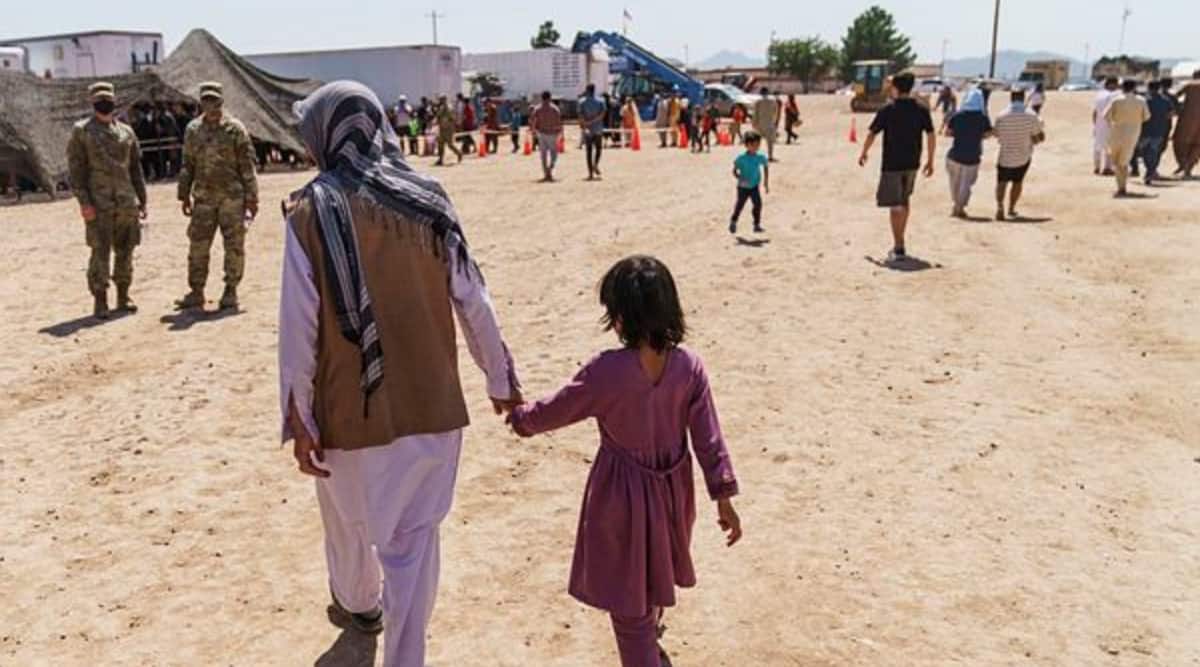 A man walks with a child through Fort Bliss' DoÃ±a Ana Village where Afghan refugees are being housed, in New Mexico, Friday, Sept. 10, 2021. (AP)

War-weary residents of Kabul expressed anger and feelings of betrayal by the United States on Saturday, as the world marked the 20th anniversary of the 9/11 attacks that prompted a U.S. invasion of Afghanistan and the toppling of its Taliban rulers.

After a two-decade occupation, U.S. forces abruptly pulled out of Afghanistan last month, triggering the collapse of its Western-backed government and the Taliban’s dramatic return to power. “The misfortunes we are currently experiencing are because of America,” said Abdul Waris, a Kabul resident, as the white flags of the Taliban emblazoned with lines from the Koran hung from nearby lampposts.

Some of the mostly young men who spoke to Reuters complained that U.S. forces had not tried to help the Afghan people. “After the September 11 events took place, the Americans were in our country for 20 years for their own benefit,” said Jalil Ahmad. “They took the benefits they had in mind for 20 years while we did not get any benefit from them.

They have left the country in a state of confusion. “Bearded Taliban fighters with guns slung over their shoulders were visible around the capital but the mood was quiet and calm following the dramatic changes of recent weeks. “Now there is security and security is good… May God give the Taliban more strength to maintain this (calm) forever,” said resident Gul Agha Laghmni.

Subscriber Only Stories
View All
ExplainSpeaking | Budget 2023-24: Economic growth, fiscal health and unem...
In Jharkhand district, block-level clubs help elderly deal with loneliness
Delhi Confidential: PM Modi, top leaders attend Nadda wedding, but QR cod...
What could be the govt’s calculations behind the slashing of the MG...
Monthly plan to access Budget
Also Read |On the 20th anniversary of 9/11 World Trade Centre attacks, the story of a miraculous escape

‘A LOT OF COMMOTION’

U.S. forces toppled the Taliban after the 9/11 attacks because they had provided sanctuary to Osama bin Laden, leader of al Qaeda, which carried out the attacks.

Since returning to power last month, the Taliban has appointed an acting cabinet including several former militants held by the United States in Guantanamo Bay.

Western leaders have expressed concern over the outlook for human rights, especially for women, under Taliban rule. Several street protests led by women have been broken up in the past two weeks, and some people have been detained and beaten.

The Taliban have promised to investigate such incidents. When they were last in power from 1996 to 2001, the Taliban imposed a strict version of Islamic law and often punished people with public floggings, amputations and executions. Women’s rights to work and education were severely restricted.

There were relatively few women on the streets of Kabul on Saturday, and all those who were out had their heads covered – a fact welcomed by residents such as Shah Raoof.

“In the presence of America, there was a lot of commotion in our country. Women were unveiled,” he said.”The majority of our youth fled, a number were martyred and a number of others were afflicted by America through war and misery.”