Many of the cases were among fully vaccinated individuals with mild symptoms, although the booster shot status of some patients was not reported. 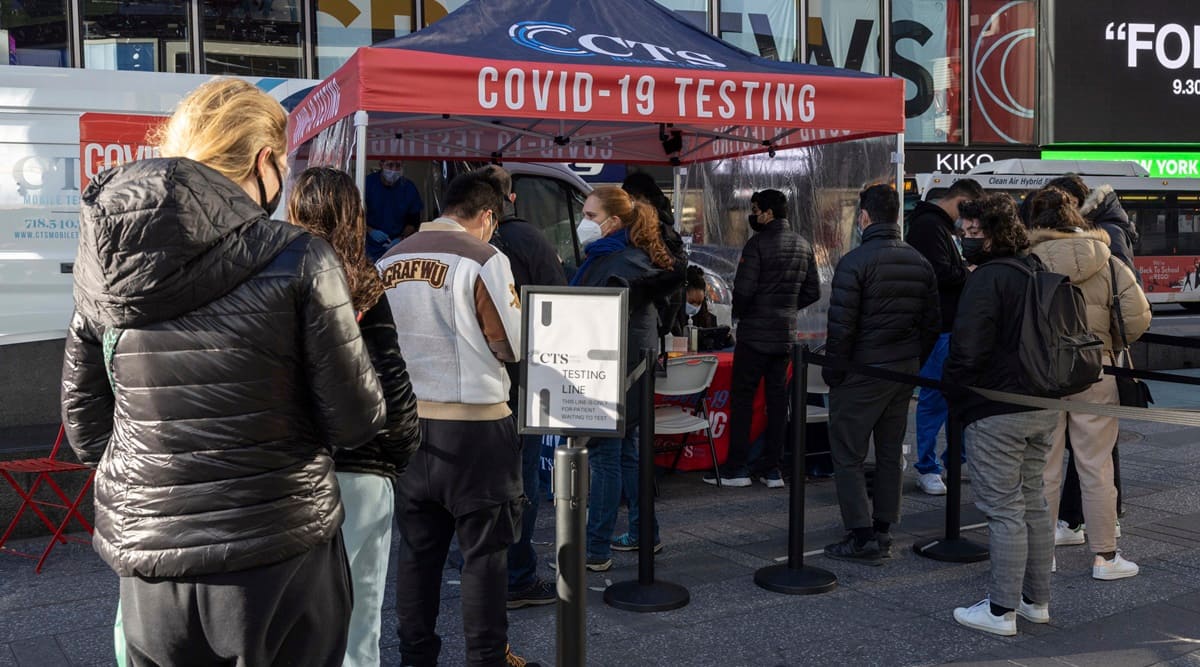 People wait in line at a Covid-19 testing site at Times Square on Friday. (Photo: AP)

The Omicron variant of the coronavirus has spread to about one-third of U.S. states, but the Delta version remains the majority of COVID-19 infections as cases rise nationwide, U.S. health officials said on Sunday. Though the emergence of the new variant has caused alarm worldwide, Dr. Anthony Fauci, the top U.S. infectious disease official, told CNN “thus far it does not look like there’s a great degree of severity to it.” He added that it was too early to draw definitive conclusions and that more study is needed.

Fauci, U.S. President Joe Biden’s chief medical adviser, said he also hoped the United States would lift its ban on travelers from southern African countries in a “reasonable period of time.” The South African government has complained it is being punished – instead of applauded – for discovering the new variant and quickly informing international health officials.

Fauci, in an interview on CNN’s “State of the Union,” praised South Africa for its transparency and said the U.S. travel ban was imposed at a time “when we were really in the dark” and needed time to study the variant.At least 16 U.S. states have reported Omicron cases: California, Colorado, Connecticut, Hawaii, Louisiana, Maryland, Massachusetts, Minnesota, Missouri, Nebraska, New Jersey, New York, Pennsylvania, Utah, Washington and Wisconsin, according to a Reuters tally.

Many of the cases were among fully vaccinated individuals with mild symptoms, although the booster shot status of some patients was not reported. Despite several dozen Omicron cases, the Delta variant still accounts for 99.9% of new COVID cases in the United States, CDC Director Dr. Rochelle Walensky told ABC News in an interview.

“We are everyday hearing about more and more probable cases so that number is likely to rise,” she said.The United States over the last seven days has averaged 119,000 new cases a day and lost nearly 1,300 lives to COVID each day, according to a Reuters tally.

Louisiana currently has one Omicron case from an individual who traveled within the United States, its health department said on Sunday.On Saturday, it said a Norwegian Cruise Line Holdings Ltd cruise ship set to dock in New Orleans with more than 3,000 passengers found 10 cases of COVID-19 on board.

Explained |What are the latest Covid-19 testing guidelines in US for international travellers?

Officials said passengers on the Norwegian Breakaway, which stopped in Belize, Honduras and Mexico, would be tested and given the CDC’s post-exposure and quarantine guidelines. The emergence of the new variant has sharply curtailed the number of energy executives and government ministers planning to attend the four-day World Petroleum Congress in Houston this week, which had already been rescheduled from 2020.

“We want to see how well the vaccinations hold up,” Colorado’s Jared Polis told ABC.As U.S. Omicron cases emerge, COVID-19 vaccine makers aim to quickly tweak their shots to target the variant and U.S. regulators have vowed speedy reviews, but that could still take months.”Certainly, FDA (Food and Drug Administration) will move swiftly and CDC will move swiftly,” Walensky said.

Moderna Inc has targeted U.S. approval of an updated vaccine as soon as March, but company officials on Sunday said it will still take time to increase output.Moderna Co-founder and Chairman Noubar Afeyan told CNN it would take another seven to 10 days to gather key data.

Then, it “will take a good 60 to 100 days” to deploy an Omicron-specific shot, although other options like a higher dose of the current booster are being explored, he said.U.S. government officials are also working with Pfizer Inc and Johnson & Johnson on updated shots, while Pfizer and Merck & Co Inc are pursuing COVID-19 pill treatments.