Nancy Pelosi Taiwan visit Highlights: Earlier in the day, China said it is suspending dialogue with the United States on issues from climate change to military relations and anti-drug efforts in retaliation.

Nancy Pelosi during her visit to Taiwan as part of her Asia tour.

China will not be able to isolate Taiwan by preventing the United States officials from traveling there, US. House Speaker Nancy Pelosi said Friday in Tokyo as she wrapped up an Asia tour that has escalated tensions in the region, Reuters reported. “They may try to keep Taiwan from visiting or participating in other places, but they will not isolate Taiwan by preventing us to travel there,” she said, defending her trip to the island nation that infuriated China. Pelosi said her visit to Taiwan was not intended to change the status quo for the island but to maintain peace in the Taiwan Strait, which separates Taiwan and mainland China.

Earlier in the day, China said it is suspending dialogue with the United States on issues from climate change to military relations and anti-drug efforts in retaliation for a visit this week to Taiwan by US House Speaker Nancy Pelosi, according to AP. This response is the latest in a series of targeted steps intended to punish Washington for allowing the visit to the island it claims as its own territory.

This come as China continues to hold threatening military exercises in six zones off Taiwan’s coasts. China’s military exercises aimed at Taiwan, including missiles fired into Japan’s exclusive economic zone, represent a “significant escalation,” said US Secretary of State Antony Blinken on Friday. China’s military drills were launched following a visit earlier this week by US House Speaker Nancy Pelosi to Taiwan that infuriated Beijing. Beijing announced sanctions on Pelosi and her family for her Taipei visit.

Thank you for reading

Developments in Taiwan will not impact India: RBI Guv

Reserve Bank Governor Shaktikanta Das on Friday said India is unlikely to be impacted by any adverse developments in Taiwan. The Governor said Taiwan accounts for only 0.7 per cent of India’s overall trade and the capital flows from the island are also not very high.

“…so far as India is concerned, you know, our trade with Taiwan is miniscule. It’s about 0.7 per cent of our total trade. So therefore the impact on India is expected to be very, very, very negligible,” Das told reporters here. (With PTI)

US House Speaker Nancy Pelosi Friday said her visit to Taiwan was not intended to change the status quo for the island but to maintain peace in the Taiwan Strait, which separates Taiwan and mainland China.

She praised Taiwan's hard-fought democracy and success in technology and business, while criticizing Chinese violations of trade agreements, weapons proliferation and human rights problems, including its treatment of its Muslim Uyghur minority.

China will not be able to isolate Taiwan by preventing US officials from traveling there, US House Speaker Nancy Pelosi said Friday in Tokyo as she wrapped up an Asia tour highlighted by a visit to Taipei that infuriated Beijing. Beijing has tried to isolate Taiwan, including by preventing the self-governing island from joining the World Health Organization, Pelosi said.

“They may try to keep Taiwan from visiting or participating in other places, but they will not isolate Taiwan by preventing us to travel there,” she said, defending her trip that has escalated tensions in the region.

What is Taiwan’s ‘porcupine strategy’ to protect itself if China attacks?

China on Thursday (August 4) launched aggressive and unprecedented military exercises near Taiwan in response to US House Speaker Nancy Pelosi’s visit to the island that Beijing claims as part of its territory.

The “porcupine doctrine”, which was proposed in 2008 by US Naval War College research professor William S Murray, is a strategy of asymmetric warfare focused on fortifying a weak state’s defences to exploit the enemy’s weaknesses rather than taking on its strengths.

In its 2021 Quadrennial Defence Review, Taiwan’s Ministry of National Defence defined asymmetric systems as ones that are “small, numerous, smart, stealthy, mobile and hard to be detected and countered”, and “associated with innovative tactics and employments”. According to Taiwan’s former Chief of the General Staff Admiral Lee Hsi-ming, these systems are “a large number of small things”.

▶️The need for such a strategy

China enjoys overwhelming military superiority over Taiwan. Over the past decade, Beijing has developed far more accurate and precise weapon systems to target Taiwan and has been vocal about its intention to “reunite” the island with the mainland, by force or coercion if needed.

▶️How easy will it be for China?

Missile strikes, cyberattacks, air and naval blockade aside, undertaking a full-scale invasion across the Taiwan Strait, with attendant risks of anti-ship and anti-air attacks, could present challenges for China. The PLA is estimated to have air and naval resources to carry out an initial landing of 25,000 or more troops, which could increase if it deploys civilian ships to meet its military objectives. However, it will have to first select and secure a suitable beachhead from among the handful that is available.

What has Chinese Foreign Ministry said over Pelosi's visit to Taiwan?

➡️ Will cancel dialogues between US and China military leaders.

China on Friday said that it is cancelling several defence meetings and suspending key climate talks with the US after US House Speaker Nancy Pelosi's Taiwan visit.

China has announced unspecified sanctions on US House Speaker Nancy Pelosi for her visit earlier this week to Taiwan.

A Chinese Foreign Ministry statement said Friday that Pelosi had disregarded China’s concerns and resolute opposition to her visit to the self-ruled island, which Beijing claims. The Chinese statement called Pelosi’s visit provocative and said it undermines China’s sovereignty and territorial integrity. It said that sanctions would be imposed on Pelosi and her immediate family but did not say what they would be. Such sanctions are generally mostly symbolic in nature. (Read more)

Chinese foreign ministry has said that it will sanction Nancy Pelosi over her Taiwan visit, reported news agency Reuters.

Japanese officials' recent statements on the current tensions in the Taiwan Strait were an attempt to justify the 'wrongdoers', Chinese foreign ministry spokesperson Hua Chunying said on Friday during a regular briefing.

Chinese Vice Foreign Minister Deng Li on Thursday summoned Japanese Ambassador to China Hideo Tarumi and said Japan is historically responsible for its wrongdoing on the #Taiwan question and must not interfere in China’s internal affairs. pic.twitter.com/ZV0nyLZE7X

The harsh remarks from Beijing come after foreign ministers of G7 nations - including Japan - called on China on Wednesday to resolve tension around the Taiwan Strait in a peaceful manner, prompting China to cancel a planned meeting between Foreign Minister Wang Yi and his Japanese counterpart on the sidelines of ASEAN events in Cambodia. (Reuters)

“China has chosen to overreact and use Speaker Pelosi’s visit as a pretext to increase provocative military activity in and around the Taiwan Strait," Blinken said at a news conference in the Cambodian capital. Blinken also said the US stands in “strong solidarity” with Japan following the “dangerous actions China has taken.” (Reuters)

China's firing of missiles around Taiwan is a disproportionate, significant, and unjustified escalation and the United States has made it repeatedly clear to China it does not seek a crisis, US Secretary of State Antony Blinken said on Friday.

US Secretary of State Blinken at ASEAN meeting:

Blinken told a news conference on the sidelines of the ASEAN Regional Forum that the United States would not be provoked by China and Washington was seriously concerned, adding "there was no possible justification for what they have done." (Reuters)

In photos: Tourists flock on Chinese coast to see drills

On the Chinese coast across from Taiwan, tourists gathered Friday to try to catch a glimpse of any military aircraft heading toward the exercise area. Fighter jets could be heard flying overhead and tourists taking photos chanted, “Let's take Taiwan back," looking out into the blue waters of the Taiwan Strait from Pingtan island, a popular scenic spot, reported news agency Reuters.

China said it summoned European diplomats in the country to protest statements issued by the Group of Seven nations and the European Union criticising threatening Chinese military exercises surrounding Taiwan.

The Foreign Ministry on Friday said Vice Minister Deng Li made “solemn representations” over what he called “wanton interference in China's internal affairs”.

US Secretary of State Antony Blinken told an Asian meeting of top diplomats on Friday that China's reaction to US house speaker Nancy Pelosi's visit to Taiwan was "flagrantly provocative", a western official said.

Blinken, speaking at the East Asia Summit in Cambodia, said China had sought to intimidate not only Taiwan, but neighbours too, after it launched the largest-ever military drills in the Taiwan Strait, the official said. (Reuters)

Explained: What military drills is China conducting near Taiwan, what are the risks?

China is staging live-fire military drills in six self-declared zones surrounding Taiwan in response to a visit by US House Speaker Nancy Pelosi to the island Beijing claims as its own territory. 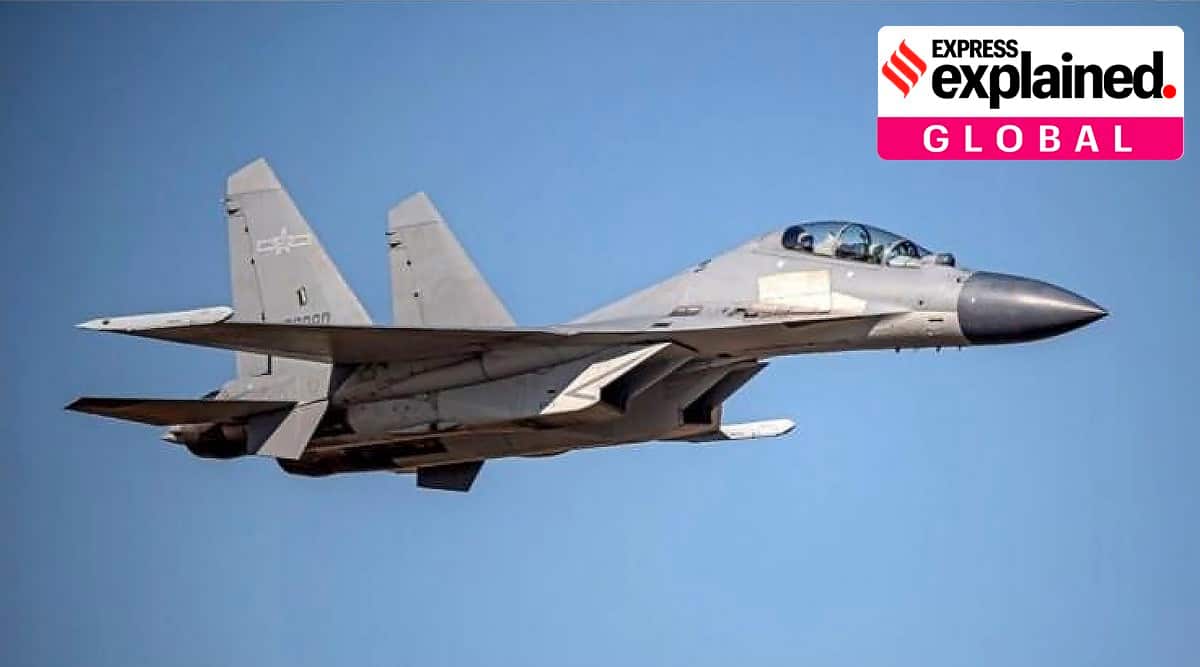 China has warned aircraft and ships to avoid the areas during the exercises, which run through Sunday. The drills appear to be a rehearsal for a potential blockade and invasion of the island that would almost certainly draw in Taiwan’s chief supporter, the United States, along with American allies including Japan and Australia. (Read more)

External Affairs Minister S Jaishankar met US Secretary of State Antony Blinken in Cambodia’s capital Phnom Penh on Thursday. The meeting comes at a time when US-China tension is high over US House Speaker Nancy Pelosi’s visit to Taiwan.

A warm conversation to start meetings on sidelines of ASEAN Ministerial in Phnom Penh.

Discussed the ever strengthening India-US relationship and the global situation with US Secretary of State @SecBlinken. pic.twitter.com/JzcrBSklx4

In his opening remarks at the meeting, which took place on the margins of an ASEAN Foreign Ministers’ meeting, Blinken referred to concerns over “challenges” in Sri Lanka, Myanmar, and the situation in the Indo-Pacific. (Read more)

Taiwan's military will prepare combat readiness but will not ask for a war, the defence ministry added. (Reuters)

The Speaker of the House of Representatives, Nancy Pelosi, landed in Taiwan on Tuesday (August 2) evening, ignoring Chinese threats and a warning by President Xi Jinping, delivered to President Joe Biden last week, to “not play with fire” (by provoking China).

Pelosi’s visit to Taiwan is the highest-level visit by an American official to the island in a quarter century. The senior US politician has been critical of China on multiple fronts over the decades.

The US has maintained a ‘One China’ policy since the 1970s, under which it recognises Taiwan as a part of China. But it has unofficial ties with Taiwan as well — a strategy that is known as strategic or deliberate ambiguity. Beijing considers Taiwan a part of China, threatens it frequently, and has not ruled out taking the island by military force at any time. (Read more)