The warring sides met mediators in Geneva and agreed to not "deliberately" target civilian populations in the Nagorno-Karabakh conflict. They will also exchange a list of prisoners and bodies of those killed. 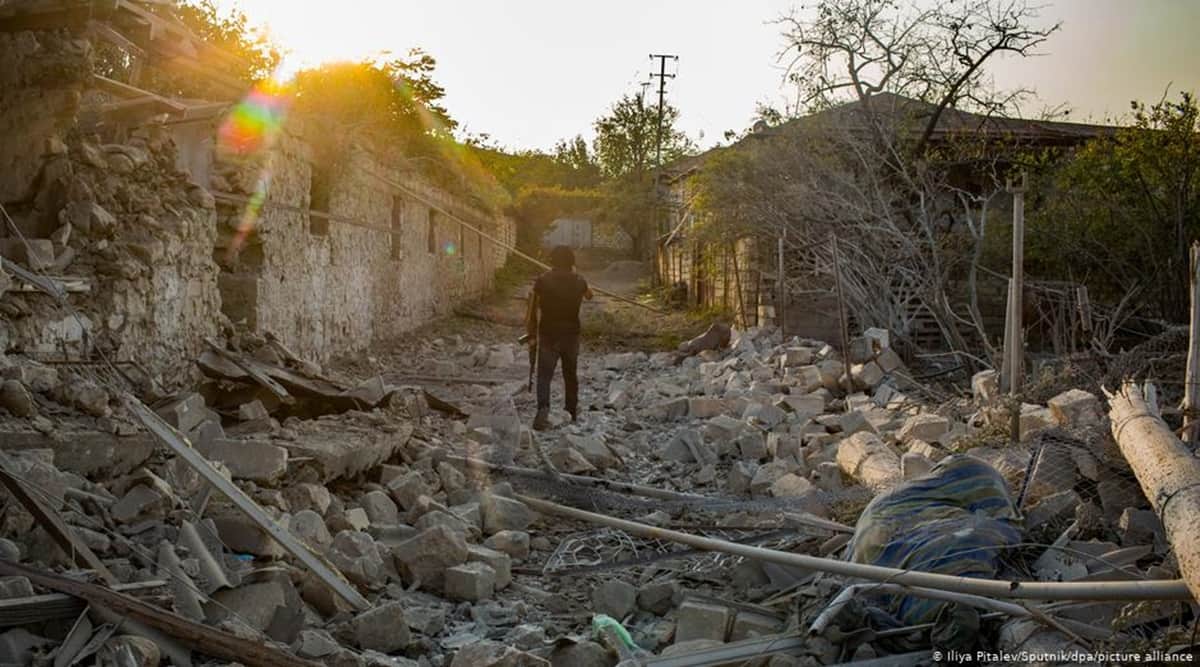 The latest outbreak of conflict, which has left at least 1,000 dead, began on September 27. (Iliya Pitalev/Sputnik/dpa)

Armenia and Azerbaijan agreed to not deliberately target civilian populations amid fighting over Nagorno-Karabakh at peace talks in Geneva on Friday.

The two sides will also exchange a list of prisoners of war and bodies of those killed in the battlefield within a week, the co-chairs of the Organization for Security and Cooperation in Europe (OSCE) Minsk Group said in a statement published on the OSCE website.

“The parties will hand over to the ICRC (International Committee of the Red Cross) the list of prisoners of war currently in custody to ensure access and possible exchange,” the statement read.

Yerevan and Baku will also submit questions and comments regarding possible ceasefire mechanisms in writing, in accordance with the joint statement that was adopted in Moscow on October 10.

The co-chairs — Igor Popov of the Russian federation, Stephane Visconti of France and Andrew Schofer of the United States — engaged in separate and joint talks with Armenian Foreign Minister Zohrab Mnatsakanyan and his Azerbaijani counterpart Ceyhun Bayramov.

“The sides engaged in an open and substantive exchange of views aimed at clarifying their negotiating positions on core elements if a comprehensive solution in accordance with item 3 of the October 10 joint statement,” the Co-Chairs said, adding that they will continue working with the two parties “intensively” to find a peaceful settlement of the conflict.

The mediation talks are the latest attempt to put an end to the longstanding conflict over the territory that is internationally recognized as part of Azerbaijan but is ruled by ethnic Armenians since a war there ended in 1994.

The latest outburst in the conflict began in September and has since left hundreds of people dead on both sides.

Three ceasefires have failed to stop what is being called the worst fighting in the South Caucasus for more than 25 years. The most recent ceasefire was brokered last week by US Secretary of States Mike Pompeo in Washington.

Friday saw sporadic fighting in the region as Azerbaijan’s defence ministry said military positions and settlements in the Aghdere, Khojavend and Gubadli areas had come under attack while the Armenian-controlled Nagorno-Karabakh defence ministry said it had foiled Azeri offensives and that shelling of civilian areas of towns in the enclave had resumed.

It also said it had captured a Syrian fighter.