The pledge came as US Secretary of State John Kerry stepped up efforts to forge a broad anti-jihadist coalition. 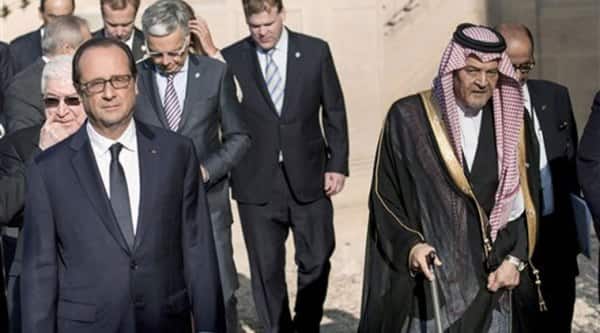 The world’s top diplomats pledged today to support Iraq in its fight against Islamic State militants by “any means necessary”, including “appropriate military assistance”, as leaders stressed the urgency of the crisis.

Representatives from around 30 countries and international organisations, including the US, Russia and China, gathered in Paris as the brutal beheading over the weekend of a third Western hostage focussed participants’ minds.

The pledge came as US Secretary of State John Kerry stepped up efforts to forge a broad anti-jihadist coalition.

In a joint statement issued after the talks, diplomats vowed to support Baghdad “by any means necessary, including appropriate military assistance, in line with the needs expressed by the Iraqi authorities, in accordance with international law and without jeopardising civilian security.”

They stressed IS extremists were “a threat not only to Iraq but also to the entire international community” and underscored the “urgent need” to remove them from Iraq, where they control some 40 percent of its territory.

However, the final statement made no mention of Syria, where the extremists hold a quarter of the country and where the regime of Bashar al-Assad still had friends around the Paris conference table, including Russia.

Opening the conference, French President Francois Hollande emphasised there was “no time to lose” in the fight against the jihadists.

“The fight of the Iraqis against terrorism is our fight as well,” Hollande stressed, urging “clear, loyal and strong” global support for Baghdad.

Iraqi President Fuad Masum also stressed the urgency of the crisis, saying there was a risk the militants could overrun more countries in the region.

“We are still asking for regular aerial operations against terrorist sites. We have to pursue them wherever they are. We need to dry up their sources of finance,” added the Iraqi leader.

The international community is scrambling to contain the IS jihadists — who have rampaged across Iraq and Syria and could number as many as 31,500 fighters, according to the CIA.

As if to underscore the urgency of the campaign, France’s defence minister announced just hours ahead of the conference it was joining Britain in carrying out reconnaissance flights in support of the US air campaign against the jihadists.

Shortly afterwards, two French Rafale fighter jets took off from the Al-Dhafra base in the United Arab Emirates, an AFP correspondent reported.

The Paris conference was one of a series of diplomatic gatherings in the run-up to a United Nations General Assembly later this week.