Melania Trump's jacket: Donald Trump who has been at loggerheads with several US mainstream media outlets, including the CNN, ABC News, The New York Times and the Washington Post, tagged the media as nation’s ‘biggest enemy.’ US President Donald Trump came to the rescue of First Lady Melania Trump whose choice of clothing during a recent visit to a migrant child the ire of many on social media. The First Lady donned a green, hooded military jacket with a white graffiti on the back that read “I really don’t care, do u?”

Offering his own interpretation, Trump on Twitter said the message on the jacket “refers to the Fake News Media.” “Melania has learned how dishonest they are, and she truly no longer cares!” he added on Twitter. The First Lady’s spokeswoman also said there was “no hidden message” in the jacket. Spokeswoman Stephanie Grisham underscored that message in a tweet with the hashtags (hash)SheCares and (hash)ItsJustAJacket.

“I REALLY DON’T CARE, DO U?” written on the back of Melania’s jacket, refers to the Fake News Media. Melania has learned how dishonest they are, and she truly no longer cares! 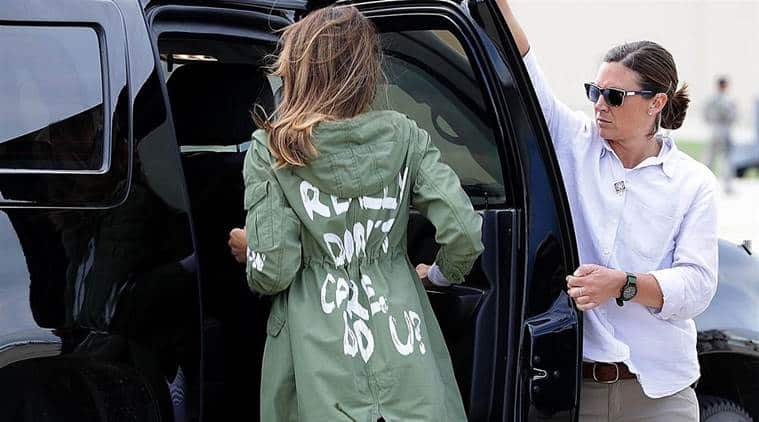 U.S. first lady Melania Trump walks from her airplane to her motorcade wearing a Zara design jacket with the phrase “I Really Don’t Care. Do U?” on the back as she returns to Washington from a visit to the U.S.-Mexico border area in Texas at Joint Base Andrews, Maryland, US. (REUTERS)

Trump who has been at loggerheads with several US mainstream media outlets, including CNN, ABC News, The New York Times and Washington Post, tagged the section of media as the nation’s ‘biggest enemy’. He has quite often described these popular media houses as ‘fake media’.

Accusing the media of distorting facts about his presidency, Trump had also announced ‘fake news awards’ earlier this year. “I will be announcing THE MOST DISHONEST & CORRUPT MEDIA AWARDS OF THE YEAR on Monday at 5:00 o’clock. Subjects will cover Dishonesty & Bad Reporting in various categories from the Fake News Media. Stay tuned!” he wrote on Twitter. The “winners” included New York Times, Washington Post, Time magazine, ABC News and CNN, which lead the race with four mentions.