The Indian High Commission in Maldives tweeted: “Maldivian authorities have confirmed that 7 of the deceased were Indian nationals. Identity of one person is still being confirmed. High Commission is in contact with the families.” 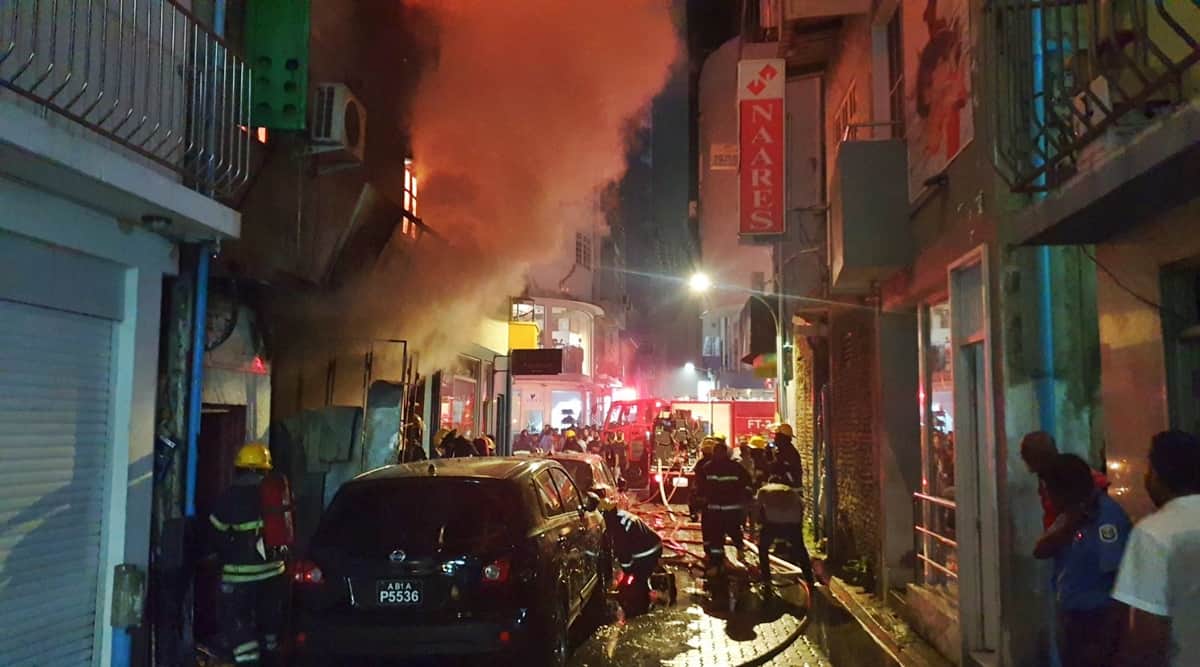 Several people were reportedly killed in a fire in Male, Maldive. (Twitter/@liyaakujjaa)

At least seven Indians were among 10 people killed early Thursday when a major fire broke out in a garage below cramped living quarters housing foreign workers in Maldives’ capital Male, officials said.

The fire broke out in the M. Nirufehi area near the Maaveyo Mosque at around 12:30 am.

We are deeply saddened by the tragic fire incident in Malé which has caused loss of lives, including reportedly of Indian nationals.

We are in close contact with the Maldivian authorities.

The Indian High Commission in Maldives tweeted: “Maldivian authorities have confirmed that 7 of the deceased were Indian nationals. Identity of one person is still being confirmed. High Commission is in contact with the families.”

The Maldives National Defence Force, which was active on site with an emergency response team, said the recovered bodies included those of nine Indians, and one Bangladeshi national, The Edition news portal reported.

Maldives Foreign Minister Abdulla Shahid Thursday called up his Indian counterpart S Jaishankar and conveyed the condolences of the government and people of Maldives over the deaths. He said a full investigation has been ordered into the incident. “Received a call from FM @abdulla_shahid expressing condolences and assuring full support. High Commission is closely working with Maldivian authorities on this matter,” Jaishankar tweeted.

In another tweet, he said: “Deeply grieved by the tragic loss of lives in a fire incident in Male today. Full details regarding Indians being ascertained by the High Commission who are contacting affected families.”

Ministry of External Affairs spokesperson Arindam Bagchi said the Indian Mission in Male is assisting families of the affected Indians. “Our high commission there has clarified that local authorities have indicated that at least 10 bodies have been found. Local authorities are engaged in identifying the bodies,” Bagchi said. “Until such time we are able to identify the bodies as Indian citizens, I would not like to confirm how many have passed away,” he said.

He said the fire broke out in a residential building for foreign workers. “Some versions say that there was a garage near-by the building. We are looking at the details. This building housed foreign workers including Indian citizens,” Bagchi said.

The garage is located on the ground floor of the building, while the first-floor housed migrant workers. The living quarters had only a single window, according to news portal SunOnline International.

There were 38 migrant workers from Bangladesh, India and Sri Lanka living in the building, with a gas cylinder next to each bed, the Maldives National Defence Force said. Maldives National Disaster Authority (MNDA) chief Hisan Hassan said 28 people were rescued from the building. He said 19 of them had been taken away by their employers while nine people remain under MNDA’s care — six women and three men.

Colonel Ibrahim Rasheed, Commandant, MNDF Fire and Rescue Service, said: “There were a lot of gas cylinders… Different types of gas… We found it very challenging to fight the fire.” The fire was doused at 4.34 am (local time).

The Vaccine War: Vivek Agnihotri announces follow-up to The Kashmir Files, calls it an ‘incredible true story’ that will be released in 11 languages