Alarmed by the fast-declining health of its crucial mangroves, the Maldives is desperately trying to save them, particularly one species which holds historical and cultural significance to its people. Helping the archipelagic nation is a team of scientists from India’s Cochin University of Science & Technology (CUSAT). 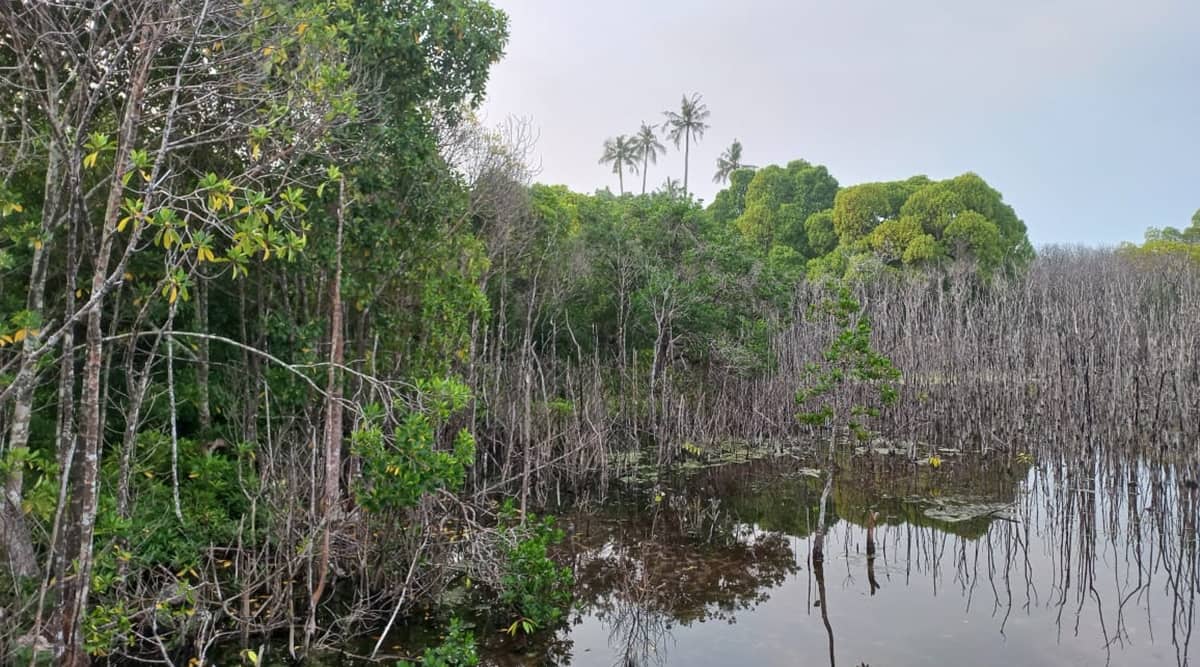 The Maldives is home to 15 mangrove species, known as ‘faa’ in the Dhivehi language, including some that are listed as critically endangered by the International Union for Conservation of Nature’s (IUCN) Red List. Photo credit: Abdulla Fazeel

Some three years ago, during one of his daily visits into the mangroves of Neykurendhoo island in northern Maldives, 45-year-old Ibrahim Marif began noticing something strange — the mangroves were dying. Concerned about the degradation happening in front of him, Marif rushed to tell the island’s council members, a local government body that oversees everyday affairs.

By February 2020, just before the onset of the Covid-19 pandemic, the health of the mangroves had deteriorated to such a degree that the country’s Environmental Protection Agency (EPA) began to take notice and sent its scientists to the islands to conduct field surveys and laboratory analyses. Simultaneously, photographs of the dying mangroves in 11 islands in northern Maldives began flooding social media, showing large patches of grey in between the lush green mangrove forests that had been struggling to survive. The sentimental value attached by the Maldivian people to the mangroves meant that the government had to act quickly to find the cause.

When the team of scientists from CUSAT first saw the mangroves of Neykurendhoo, they realised that the trees had completely dried up—from the root to the tip. “There was no foliage; only dried sticks and stems.” Photo credit: Dr. S Sreelekshmi

That was when the Maldives asked the Indian High Commission for assistance in connecting with Bijoy Nandan, professor at Kerala’s Cochin University of Science & Technology (CUSAT), who is particularly known for his research on Indian mangroves. What the Maldives has been witnessing is not unusual, Prof. Nandan told indianexpress.com, although it is a new phenomenon for the country. Similar cases of mangrove degradation have been recorded in several other parts of the world, for instance, in Australia, Vietnam and India, where mangroves can be found.

In the middle of the pandemic, with travel routes closed to the Maldives, Prof. Nandan’s team was tasked with investigating the preliminary causes of the phenomenon. The Maldives Ministry of Environment and the EPA stepped in to assist by collecting plant, water and soil samples from the impacted islands and sending them to CUSAT so that scientists could investigate the potential environmental as well as pathological aspects of the mangrove die-off. “The preliminary investigation of the water, soil and plant samples received by CUSAT revealed that a certain level of infectivity exists, which needed further examination,” Prof. Nandan said.

In December 2021, a four-member team led by Prof. Nandan set off to investigate what plagued the mangroves of northern Maldives, located some 280 km from the capital Malé. “I’ve done research on mangroves since 2011 and I had never seen a situation like this. It was really unusual,” said Dr. S Sreelekshmi, post-doctoral fellow and mangrove researcher at CUSAT. “The mangroves had completely dried up — from the root to the tip. There was no foliage; only dried sticks and stems.”

The Maldives is home to 15 mangrove species, known as ‘faa’ in the Dhivehi language, including some that are listed as critically endangered by the International Union for Conservation of Nature’s (IUCN) Red List. But among these, the country is most anxious about saving one particular species that the IUCN lists as being of ‘least concern’, the Bruguiera cylindrica.

The propagules of the Bruguiera cylindrica in the island of Neykurendhoo in the Maldives. Photo credit: Ibrahim Marif

Found in several parts of tropical Asia, as well as in Australia, the Bruguiera cylindrica can grow up to 20 metres in height and has a greyish bark. While the ecological importance of mangroves has been well-documented, in the Maldives, the Bruguiera cylindrica has historically been an important plant, in part because it is a source of food in the country. Its propagules, a vegetative structure that detaches from the plant to give rise to a new plant, can be cooked and eaten in various ways.

“During the Second World War, when there was a shortage of food, the Bruguiera cylindrica, locally known as kan’doo, was distributed to other islands where mangroves are not found, from islands that had the species,” said Aishath Farhath Ali, assistant director at the EPA. In Kelaa, one of the inhabited islands in northern Maldives severely affected by this ecological deterioration, kan’doo has particularly been a necessary food source.

The flower of the Bruguiera cylindrica. Photo credit: Abdulla Fazeel

During this period, which later came to be known as ‘bodu thadhu’, or the ‘big famine’ in Dhivehi, islands like Kelaa, with large forests of kan’doo faa or the Bruguiera cylindrica, became areas with food secure populations.

Growing up in Neykurendhoo, Marif remembers his family struggling to afford rice and wheat flour. “We used to eat kan’doo twice a day. Today, I don’t see as many mangroves and so I am afraid because I have experienced what it means to not have food to eat,” he said. During his childhood, Marif’s mother would boil the kan’doo, mix it with coconut and feed it to the family. “It used to fill our stomachs.” For many families, the kan’doo served as a substitute for rice.

Advertisement
Ibrahim Marif helping the team of Maldivian and Indian scientists investigating the cause of the deterioration of the mangroves in the northern islands in the Maldives. Photo credit: Ibrahim Marif

The fear of the possibility of having to witness days without food once again, this time without the kan’doo to provide sustenance, is what drives Marif to push for awareness on the importance of protecting the species at the local level, he explained.

Making meals out of kan’doo is an art, one that the people of the northern Maldivian islands have perfected. The tough and bitter flesh of the raw kan’doo means that it can only be consumed after a long process of preparation. The kan’doo is peeled and boiled continuously until it softens and the bitterness is reduced. It is then washed and sun-dried, a preservation process that allows it to be stored for close to a year.

Although the now food-secure Maldives has little use for the kan’doo when it comes to everyday consumption, it is still served as part of a traditional Maldivian meal during the harvest season in May. These days, the kan’doo is eaten with garudhiya or tuna soup, grilled fish, as well as freshly grated coconut seasoned with lime, chillies and sliced onions.

A traditional meal with kan’doo, served in the northern islands in the Maldives. These days, the kan’doo is eaten with garudhiya or tuna soup, grilled fish, as well as freshly grated coconut seasoned with lime, chillies and sliced onions. Photo credit: Asima Yuanas

In the Maldives, the uses of these mangroves have not been limited to ecological and dietary spheres. Before fibre boats came into existence, the sturdy wood of the Bruguiera cylindrica was used to build boats in the northern islands. “Kelaa and Neykurendhoo would export this wood to other islands. People from other islands would come looking for this wood for boat building,” said Ali.

Before fibre boats came into existence, the sturdy wood of the Bruguiera cylindrica was used to build boats in the Maldives. This archive image shows a vessel constructed in 1957 in the Maldives, possibly used for foreign travel. Photo credit: Bob Nicholls-RAF Gan/Naajih Didi

But approximately 20 years ago, island residents stopped cutting down these trees. “The trees were not legally protected at that time but they were considered environmentally sensitive areas. So the practice of cutting down trees was discouraged and people automatically stopped doing so because they considered it a sensitive heritage,” said Ali.

It is these cultural reasons and the sentimental attachment that people have for the kan’doo that prompted the Maldives government to urgently search for solutions to prevent the devastation of these mangroves, even though the Bruguiera cylindrica is not an endangered species.

A member of the team of Maldivian and Indian scientists investigating the cause of the deterioration of the mangroves in the Maldives during field work. Photo credit: Dr. S Sreelekshmi

“Mangroves will survive in extreme environmental conditions. The salinity will be high, the soil is a combination of muddy and sandy. The oxygen level will be really low — usually zero. So something extraordinary may have happened in the Maldives,” said Dr. Sreelekshmi. The CUSAT team is in its second stage of investigations which they hope to complete in the next few weeks.

While a detailed report that will identify the specific causes is still being drawn up, several factors could have contributed to the die-off, Dr. Nandan explained. “Rise in sea level, climate change, modified beach profiles, could be some reasons. Wetland modifications have also happened rampantly in many islands.” The team is also looking into the presence of any pests or pathogens by studying genetic material recovered directly from the collected samples.

“There is lack of research to back up the claim that climate change is impacting the wetlands in the Maldives but we see more anthropological impacts due to bad land use planning, dumping of waste and blockage of water flow, which affects the wetland and mangrove ecosystem,” said Ali.

Beyond its cultural value in the Maldives, these plants also serve as the first line of defence in cases of floods wherever they are found. Mangrove forests act as a buffer between the land and the sea, and help protect coastal communities from storms, wind & erosion.

The mangroves in the northern Maldives. Photo credit: Abdulla Fazeel

“It is the lowest point on the islands, so when it rains, the rainwater runs from residential areas and accumulates in the mangroves. So people don’t realise that if you reclaim the land and make it an airport or use it for housing development, you are using that ecosystem service. It would be very likely that the residential area would be flooded during heavy rain, because we are losing the role that the mangroves play,” said Abdulla Fazeel, a conservationist who lives in Kelaa.

More than 80 percent of the islands in the Maldives stand less than 1 meter above sea level, making it a country with one of the lowest terrains in the world, particularly vulnerable to sea level rise, according to data by NASA. This means that the health of its wetland and mangrove ecosystems are particularly important to the country.

“We had some 80 million hectares of mangroves globally in the 1970s, which has shrunk to 15 million hectares today. In India, 20 to 25% of mangroves have shrunk,” said Dr. Nandan. Bordering the Maldives, India’s Minicoy Islands entirely lost its mangrove ecosystem two decades ago. “We have not searched for the problem in India. So the seriousness with which the mangroves have been looked into by the Maldives is exemplary.” In the quest to save the mangroves of the Maldives, there may be lessons for India as well.

YouTube is stepping into the world of NFTs, metaverse and Web3