Toronto van incident: Canadian PM Justin Trudeau said, "Tonight, the hearts and thoughts of an entire country are with the families and friends of those killed in Toronto today. We also wish all those injured a fast and full recovery."

Toronto van incident: Firemen cover a victim of an incident where a van struck multiple people at a major intersection in Toronto’s northern suburbs, in Toronto, Ontario, Canada. (Photo: Reuters)

At least ten people were killed and 15 injured after a van plowed into pedestrians along a sidewalk called Yonge Street in Toronto on Monday. The driver, who was taken into custody, was identified as Alek Minassian, 25, of Richmond Hill, a neighborhood close to Toronto, according to CBC News. Toronto Police Chief Mark Saunders said he did not think it was an accident. “The incident definitely looked deliberate”, he said.

Video footage of the incident showed the cop staring down the suspect at gunpoint in the middle of a street, while the man pointed to what appeared to be a gun and shouted “Kill me.” A Toronto police officer who refused to shoot the man was praised for restraint in the midst of chaos, coming just minutes after the incident. As the suspect shouted “Kill me,” the officer replied, “No, get down”. When the suspect said, “I have a gun in my pocket,” the officer responded: “I don’t care. Get down.” Here’s everything you need to know | Who is Alek Minassian?

The sidewalk was roughly a 1.6 kilometre-stretch and was filled with with lunch-hour pedestrians. Citing government officials, CBC News said Minassian was not associated with any organised militant group. Read more  | Click here to read this article in Bangla

Canada's Foreign Minister Chrystia Freeland said the G7 meeting would continue as planned into Tuesday, with officials discussing ways to secure democratic societies from foreign interference. "The work of the ministers obviously goes on. This is a very sad day for the people of Toronto and the people of Canada," she said.

The incident was one of the most violent in recent Canadian history. A former Canadian university student pleaded guilty last month to killing six men praying in a Quebec City mosque in January 2017. In September, a Somali refugee was charged with attempted murder over allegations he ran down four pedestrians with a car and stabbed a police officer outside a sports stadium in Edmonton, Alberta. "It's unprecedented," said John Flengas, acting superintendent of Toronto's paramedic

Video broadcast on several Canadian outlets showed police arresting the driver, dressed in dark clothes, after officers surrounded him and his rental Ryder van several blocks from where the incident occurred in the North York neighbourhood of northern Toronto. He appeared to make some sort of gesture at the police with an object in his hand just before they ordered him to lie down on the ground and took him away.

``I can assure the public all our available resources have been brought in to investigate this tragic situation,'' Toronto Police Services Deputy Chief Peter Yuen said earlier.

Authorities released few details in the case, saying the investigation was still underway, with witnesses being interviewed and surveillance video being examined.

Officials would not comment on a possible motive except to play down a possible connection to terrorism, a thought that occurred to many following a series of attacks involving trucks and pedestrians in Europe and the presence in Toronto this week of Cabinet ministers from the G7 nations. Asked if there was any evidence of a terrorist link, the chief said only, "Based on what we have there's nothing that has it to compromise the national security at this time."

Police in Canada's biggest city are piecing together witness accounts and surveillance video trying to determine why a driver plowed a rented van along a crowded sidewalk, killing 10 people and injuring 15 in what many said seemed a deliberate attack. Watch Video

Witnesses also said the driver was moving fast and appeared to intentionally jump a curb in the North York neighborhood as people filled the sidewalks on a warm afternoon. He continued for more than a mile, knocking out a fire hydrant and leaving bodies strewn in his wake.

The tragedy struck as Canada was still recovering from the shock of a highway crash in Saskatchewan earlier this month that killed 16 people on a bus carrying a junior hockey team.

The incident shook the usually peaceful streets of Toronto, a major tourist destination. The city, which has a population of 2.8 million, recorded 61 murders last year.

US Govt pledges to provide any support Canada may need: White House

The White House is offering its condolences to Canadians following the deadly rampage of a van down a Toronto sidewalk that killed 10 people and put 15 in the hospital. Press secretary Sarah Huckabee Sanders says in a statement Monday night that the US. stands with the Canadian people "in the aftermath of today's tragic event in Toronto.''

"Our thoughts and prayers go out to the families of those affected, and we wish a full recovery to those injured. The United States Government pledges to provide any support Canada may need," she added. 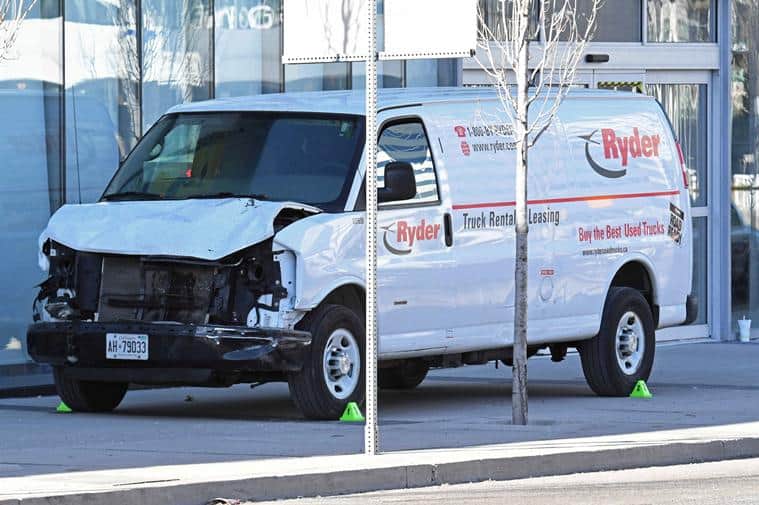 The suspect was identified as Alek Minassian, a 25-year-old man from the Toronto suburb of Richmond Hill.

The usually bustling street quickly turned into a taped-off crime scene, with shocked pedestrians murmuring into their mobile phones, stopping to take photos of tarpaulin-shrouded corpses beyond the police tape. Adrian, another witness who declined to provide his surname, said he saw the tail end of the killing spree. "I’m still shaking," he said, holding back tears, more than an hour after the incident. Downtown Toronto's iconic CN Tower, which is normally lit up in the evening, went dark on Monday evening.

Steve Cortesi witnessed the carnage when he stepped out of his building for a smoke. "I turned up my head and saw a van hit a man walking through the intersection," Reuters quoted Cortesi as saying. "It was a green light. He actually rolled into the road. I ran into the middle of the road and stopped all the cars. And then pandemonium broke loose, everyone was going crazy."

"There was stuff going on all up and down the sidewalks," Lee said by telephone. "It was surreal to see this happen on the first bright spring day in Toronto." He quickly learned he had seen the victims of one of Canada's rare mass attacks. A white van had ploughed down people walking along Yonge Street, killing 10 and injuring 15.

Young Lee, a 56-year-old attorney, looked out of his third-floor office window to see that food trucks had returned to the neighbourhood on one of the first warm days of the year. Then he realised something was wrong: Two people were on the ground next to a truck, frantically being treated by medics were performing CPR. There was blood on the ground, people were dishevelled and clothes were thrown around.

Shoes, torn clothing and bodies covered with tarpaulins were strewn across one of Toronto's busiest streets on Monday, turning a 15-block area into a ghost town after a van struck and killed 10 people and injured 15.

Former Canadian PM Stephen Harper has also expressed his condolence to the people of Toronto.

Awful news out of Toronto today, I’m shocked and saddened to learn of such a senseless and hateful loss of innocent lives. My prayers are with the families of the victims and all affected by this tragedy.

On behalf of the Costa Rican people I extend our deepest condolences to Canada and its Government,for the tragic incident in Toronto this morning.Our thougts are with the families of the victims,specially those who are suffering the loss of a loved one @JustinTrudeau @CanadianPM

The incident occurred about 30 kms from the site where Toronto is hosting a meeting of Group of Seven foreign ministers from Canada, the United States, Britain, France, Germany, Italy and Japan, but had no noticeable effect on that event's security. A man who gave his name as Ali told CNN he saw the van, and that the driver appeared to have been targeting people. "This person was intentionally doing this, he was killing everybody," the man said. "He kept going, he kept going. People were getting hit, one after another."

John Flengas, acting superintendent of Toronto's paramedic services said a number of the victims were older people and that he saw at one point a stroller fly into the air. At least one person was struck outside an Anglican church, north of where the van came to rest in front of a condominium tower.

Some of the victims were struck in a public square popular with office workers on lunch breaks. Aerial photos of the scene posted on social media showed a food truck parked just a few feet away from where emergency workers transferred people onto stretchers.