Just Stop Oil: All about the UK activist group that is climbing bridges and throwing soup at paintings

The latest protest follows other high-profile demonstrations, including the vandalism of an Aston Martin showroom in London and the defacing of a Van Gogh painting by throwing tomato soup at it. 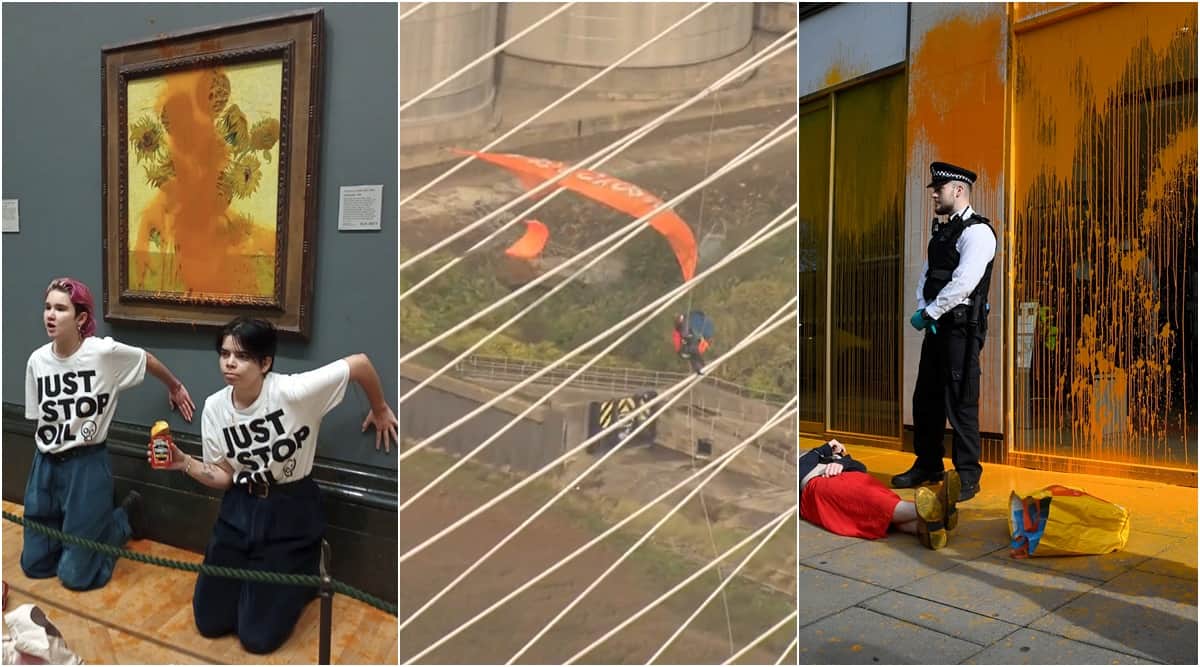 Just Stop Oil activists have thrown soup at a famous painting, climbed to the top of bridges and vandalised a luxury car showroom to protest against government plans to issue new oil licenses. (Photos via agencies)

Protesters identifying with the Just Stop Oil coalition climbed the Queen Elizabeth II bridge in Dartford, following which the bridge was closed. The closure resulted in at least two hours of delay during Monday’s rush hour, with nearly 10 km-long traffic jams on the bridge, said a report in the UK-based Guardian, citing the National Highways.

The group is demanding that the British government halt all new oil and gas licences, among other demands. The latest protest follows other high-profile demonstrations, including the vandalism of an Aston Martin showroom in London and the defacing of a Van Gogh painting by throwing tomato soup at it.

What is this group?

The Just Stop Oil group defines itself as a coalition of working to “ensure that the government commits to ending all new licenses and consents for the exploration, development and production of fossil fuels in the UK.”

Launched earlier this year, they have garnered attention due to their aggressive protest methods. Since February 2022, they have reportedly invaded the pitch during several football matches, protested on the race track during the Formula 1 race in Silverstone, vandalised many artworks in museums and blocked tankers transporting oil thus affecting the fuel distribution cycle.

The areas in red , including the QE II bridge are predicted to be under water by 2030. Not in 100 years, 2030.
Still think #JustStopOil‘s action is disrupting?
How disrupted will this area be if the water level keeps rising?#ClimateAction #ClimateEmergency #ActNow #Dartford pic.twitter.com/gRxA2JMMN9

A Guardian interview described the group as volunteers with the ability to remain nonviolent under pressure. Just Stop Oil is “a non-hierarchical coalition of organisers, scientists, lawyers and former workers in the oil industry who collaborate on both demands and tactics. Activists then operate in autonomous blocs with shared resources but no formal leadership. All funding comes from donations. The goal is to raise awareness on a massive scale,” said the report.

What are their demands?

In a video statement issued from the top of the bridge across the Thames river, Morgan, who identified himself as a civil engineer from London, described the difficulty of holding on to the ropes at the height. “I’m willing to do this kind of thing because I am not willing to sit back and watch everything I love burn for the rest of my life.”

He accused the UK government of accelerating “that process” by issuing new licences for oil and gas and of selling “all of us and our children for an uninhabitable earth.”

“I can’t challenge this madness in my desk job, designing bridges, so I’m taking direct action, occupying the QEII bridge until the government stops all new oil,” he added.

News from the bridge …

Our corrupt politics is causing this disruption, it will end when Gov #EndNewOilandGas

He said that he and his friend will remain in position until the government makes a “meaningful” statement cancelling all new licences and consents for oil and gas extraction.

Meanwhile, another group of activists have blocked traffic with sit in and public rallies in different parts of London. Police have noted the protest and said that officers are on scene to remove the protesters.

🛣 Starting at 7.30am today, Just Stop Oil supporters walked into the A4 near Baron’s Court tube station, demanding that the government halts all new oil and gas licences and consents.#FreeLouis #FreeJosh #A22Network pic.twitter.com/RKbBZSGIJ8

On Sunday (Oct 16), a group of protesters spray-painted the glass front of an Aston Martin showroom in London’s Park Lane with orange paint as a mark of protest. No permanent damage appears to have been done, as per media reports.

Advertisement
Police officers detain an activist after paint was thrown over a car showroom window during a “Just Stop Oil” protest in London, Britain, Oct 16, 2022. (Reuters)

Earlier, on Oct 14, two members of the group grabbed headlines when they threw canned tomato soup over a Van Gogh painting in London’s National Gallery. The 1888 painting, titled ‘Sunflowers’, has an estimated value of £72.5 million. Gallery authorities said that it suffered only “minor damages” to the frame and will continue on display.

Local media reported that over 100 people have been arrested in the past week for their role in the protests undertaken by the environmental group.

Newly-sworn in Home Secretary Suella Braverman, meanwhile, announced plans for a strict crackdown on climate protesters. Accusing them of holding the public “to ransom,” the Indian-origin Braverman said she will empower the police to act swiftly to curb such protests. Her plan also includes a provision to make disruption of businesses like oil refineries a criminal offence, punishable by up to 12 months in prison, a fine or both. 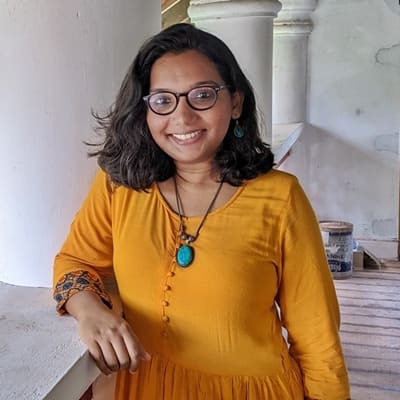