Shinzo Abe Funeral Highlights, Japan State Funeral Highlights: Japan honoured slain former Prime Minister Shinzo Abe Tuesday at the first state funeral for a former premier in 55 years with flowers, prayers and a 19-gun salute. The ceremony was attended by PM Narendra Modi, US Vice President Kamala Harris, and Australian PM Anthony Albanese, among others. The state funeral started at 10.30 am, following which PM Modi joined world leaders in paying their respects to Abe. PM Modi, who had previously referred to Abe as a “friend of India” bowed and placed a small bouquet of white flowers as a mark of respect on the altar.

Meanwhile, PM Modi, who arrived in Tokyo earlier on Sept. 27, met with sitting PM Fumio Kishida and said that Abe took Japan-India relations to a greater level. He told Kishida that he is confident that India-Japan relations will deepen further and achieve greater heights under Kishida’s leadership.

Abe was shot from close range by a man with a homemade gun while on the campaign trail in the western city of Nara. He was pronounced dead at the hospital on July 8. (Also read: Who is Tetsuya Yamagami, the man who shot Abe)

The lead-up to former Japanese Prime Minister Shinzo Abe's controversial state funeral could seem like a never-ending exchange of heated words — both for and against.

But it was the images of Tuesday's ceremony that most clearly told the story of a nation still deeply divided over the legacy of perhaps the most polarizing leader in its modern history.

Sections of Tokyo, still on edge after Abe's assassination in July, looked more like a police state than the capital of one of the most stable nations in the world.

Twenty thousand police officers and more than 1,000 soldiers crammed the neighbourhoods around the massive funeral hall, as thousands of protesters took to the streets.

If Japan is sometimes seen from abroad as a monolith of sorts, a largely uniform middleclass haven of social harmony, Abe's funeral laid bare some of the messy reality of a divided nation.

It's a place where the shadow of World War II — a subject Abe spent much of his career addressing — can still loom as large as the economic and security worries that drive modern elections.

For many of the thousands of public mourners who stood in long lines to take turns bowing and laying small bouquets of flowers beneath photos of Abe in a park near the official ceremonies, the former leader spearheaded a heroic, still unfinished quest to make Japan a “normal country.” He encouraged a sense of national pride in Japan's enormous international contributions instead of focusing on a lingering shame over war-era brutality.

“Former Prime Minister Abe was such a great prominent figure. He brought Japan back to international importance after World War II,” said one of the mourners, Masae Kurokawa, 64.

As he left an offering of flowers, Masayuki Aoki, 70, simply said, "I'm emotionally attached to him.” But Abe, in life and in death, generated as much anger as admiration.

Large groups of protesters marched through Tokyo, banging drums, shouting and holding signs that urged the funeral be scrapped.

Similar anti-Abe rallies happened across the country, a reflection of a deep resentment about honouring a man who critics say repeatedly tried to whitewash Japan's wartime atrocities, stir nationalist sentiment and engage in high-handed leadership.

"Shinzo Abe has not done a single thing for regular people,” said Kaoru Mano, a Tokyo housewife who was at one protest.

The militaristic tones of the funeral were especially striking in a nation that has operated under a pacifist constitution since 1947 — a constitution Abe wanted to revise to expand the military.

A military band played a funeral dirge and a 19-gun volley was fired as his widow brought Abe's ashes into the funeral hall.

Dozens of soldiers in crisp, white dress uniforms carried rifles with bayonets as they stood at attention in front of a huge rampart of tens of thousands of white and yellow chrysanthemums that led up to a large photograph of Abe, draped in black ribbon.

Outside the funeral hall, hundreds of police stood outside office buildings, schools and train stations.

The extreme security was linked in part to the continuing shock over Abe's assassination, in which a suspect reportedly angry about the former leader's links to a conservative South Korean religious group, the Unification Church, allegedly shot him with a homemade gun while he was giving a campaign speech in western Japan.

In some ways, the split public reactions to the state funeral, which has links to prewar imperial ceremonies that celebrated nationalism, reflect Abe's career-long push to change the way his nation operates on the world stage. (AP)

The legacy of former PM Shinzo Abe and the commitment of PM @narendramodi & PM @kishida230 will continue to guide the India-Japan partnership to new heights. pic.twitter.com/reeHp5vvni 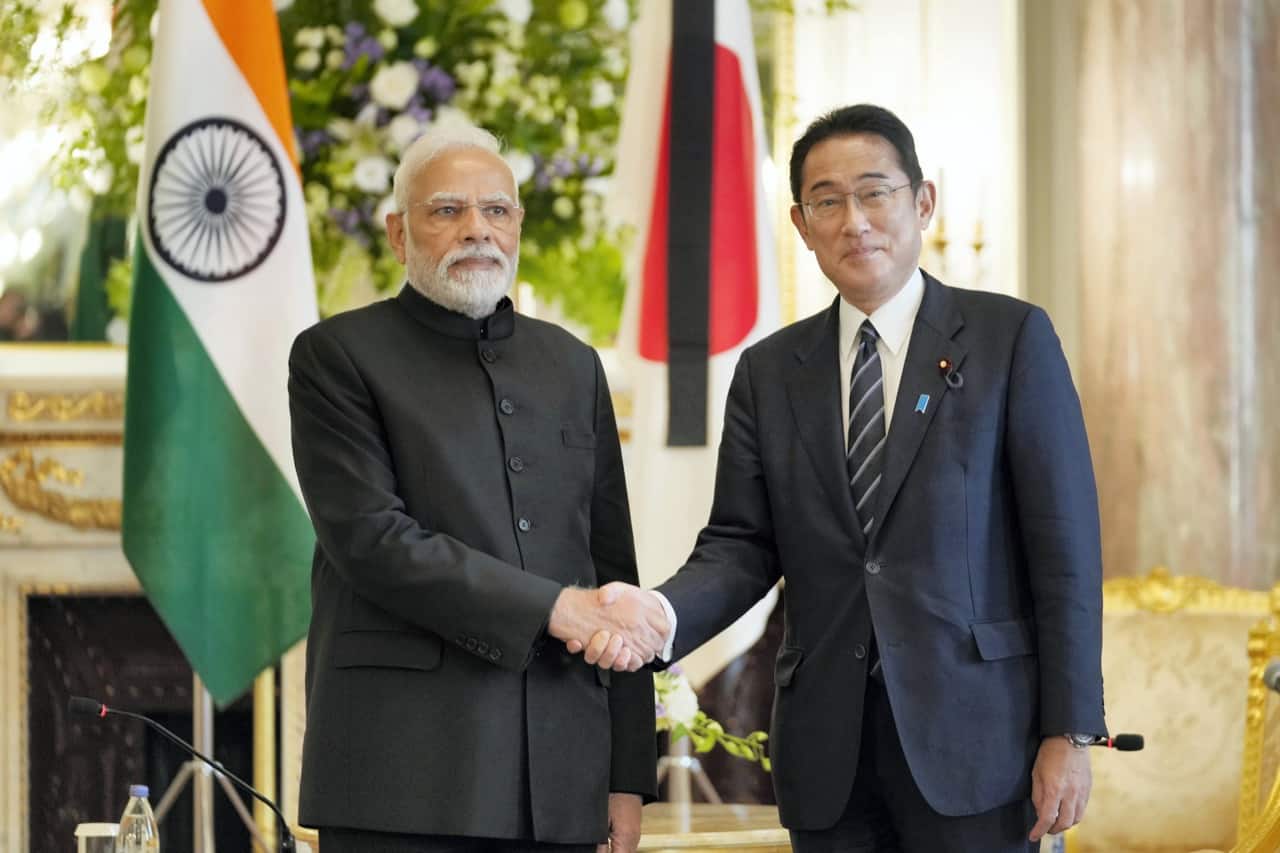 He shall live on in the hearts of millions: PM Modi

Prime Minister Narendra Modi tweeted: When I was in Tokyo earlier this year, little did I imagine I would be back for the solemn programme of former PM Abe’s state funeral. He was a great leader, a phenomenal individual and someone who believed in India-Japan friendship. He shall live on in the hearts of millions!

When I was in Tokyo earlier this year, little did I imagine I would be back for the solemn programme of former PM Abe’s state funeral. He was a great leader, a phenomenal individual and someone who believed in India-Japan friendship. He shall live on in the hearts of millions! pic.twitter.com/VwN5iufP6g

Hundreds of people protested against the publicly funded state funeral of former Japanese Prime Minister Shinzo Abe gathered in a street near the Nippon Budokan.

VIDEO: Hundreds of protesters against the publicly funded state funeral of former Japanese Prime Minister Shinzo Abe gather in a street near the Nippon Budokan.

The alleged assassin of Japan’s former Prime Minister Shinzo Abe will be detained until late November for mental evaluation so prosecutors can determine whether to formally press charges and send him to trial for murder, officials said Monday.

The suspect, Tetsuya Yamagami, was arrested immediately after he allegedly shot Abe from behind when the former leader was making a campaign speech outside a busy train station in western Japan on July 8.

The Nara District Court said it had granted permission for district prosecutors to detain the suspect for psychiatric examination until Nov. 29, when they must decide whether to file formal charges. His current detention was to expire later this month. (Read more)

Shinzo Abe, India’s closest friend in Japan, was assassinated a few months back. His importance for India and for India-Japan relations is reflected in the nation’s mourning, Prime Minister Narendra Modi’s blog post on his passing, and his visit to Japan to attend Abe’s funeral. 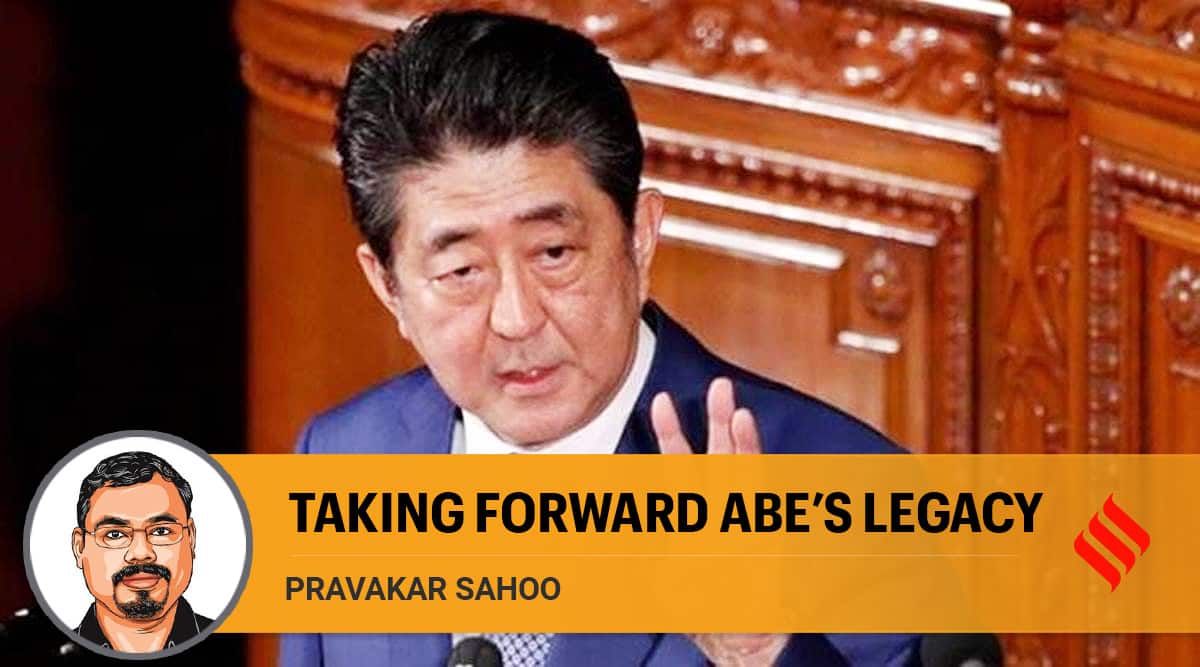 Abe was instrumental in energising like-minded powerful democratic countries for a free and open Indo-Pacific. He could clearly see the changing geopolitical and economic situation and tried his best to collaborate with India on multiple dimensions to counter China, a hostile neighbour to both India and Japan. India-Japan relations reached new heights on economic, security and strategic issues during Abe’s official tenure. After Abe demitted office, the relations have continued to be on the upswing with Japan being led by Prime Minister Fumio Kishida who leads Abe’s party, the Liberal Democratic Party. In fact, PM Kishida has assured to follow Abe’s policy on economic, strategic and security issues. The India-Japan ministerial meeting (2+2) on defense and security cooperation and joint maritime exercises reflect continuity in India-Japan cooperation. (Read more)

Watch: PM Modi bows, places flower as a mark of respect for Abe

Prime Minister Narendra Modi bowed and placed a small bouquet of white flowers as a mark of respect on Shinzo Abe's funeral altar on Tuesday.

Why is Japan's Emperor not attending the ceremony?

Emperor Naruhito, Empress Masako, Emperor Emeritus Akihito and Empress Emerita Michiko were notably absent from the funeral ceremony in Tokyo Tuesday. This is because, as per Japanese tradition, it is customary for emperors to not attend funerals within the country or abroad, reported local media house Japan Times. However, they made an exception for Queen Elizabeth II's funeral in London earlier this month.

A 19-gun salute was sounded in honour of slain former Japanese PM Shinzo Abe at his state funeral on Tuesday.

Why Abe's funeral is a divisive issue in Japan

Shinzo Abe's killing at a July 8 campaign rally set off a flood of revelations about ties between lawmakers in the ruling Liberal Democratic Party (LDP) he once ran and the Unification Church, which critics call a cult, sparking a backlash against the current premier Fumio Kishida.

A state funeral for assassinated former prime minister Shinzo Abe has become a lightning rod for controversy, prompting demonstrations and even an apparent act of attempted self-immolationhttps://t.co/2t36NKH7wg pic.twitter.com/LzlYwiMdHv

With his support ratings dragged to their lowest ever by the controversy, Kishida has apologised and vowed to cut party ties to the church.

But opposition to honouring Abe with a state funeral, the first such event since 1967, has persisted, fed by an $11.5-million price tag to be borne by the state at a time of economic pain for ordinary citizens. (Reuters)

With flowers and a gun salute, Japan bids farewell to slain Abe

VIDEO: Members of the public lay flowers to honour assassinated former prime minister Shinzo Abe, as thousands of Japanese and foreign dignitaries gather in Tokyo on Tuesday at a rare state funeral that has sparked controversy and protest pic.twitter.com/40y6t97t1o

The ceremony started at 2 pm local time (10.30 am IST), with Abe's ashes carried into the Nippon Budokan Hall in central Tokyo by his widow, Akie, to music from a military band and the booms of the honour-guard salute.

Inside the Budokan, better known as a concert venue, a large portrait of Abe draped with black ribbon hung over a bank of green, white and yellow flowers. Nearby, a wall of photos showed him strolling with G7 leaders, holding hands with children and visiting disaster areas. (Reuters)

Here are some photos from former Japanese PM Shinzo Abe's funeral in Tokyo on Tuesday.

Shinzo Abe, who was assassinated on July 8, was one of the most consequential leaders of Japan in it’s post-war history. He was Japan’s longest serving Prime Minister, having served two terms from 2006 to 2007 and then from 2012 to 2020. He announced in August 2020 that he would step down from his post following the resurfacing of a chronic illness. Abe, who was then 65, was due to be in office until September 2021.

During his time in office, Abe was a great friend of India, and a relationship that he invested personally in. He also had a special rapport with PM Modi, which came out on multiple occasions. (Read more)

A glimpse of the funeral hall

Here's a glimpse of the decorations at the funeral hall in Budokan, Tokyo.

My heart goes out to Akie Abe, who lost her husband. A very tough day for her. pic.twitter.com/ZGvDfpgPww

The funeral ceremony will start at 10.30 am IST, with Shinzo Abe's ashes carried into the venue. Here's what to expect.

Why Japan is divided over Shinzo Abe’s state funeral

A lavish, taxpayer-funded funeral for Japanese former Prime Minister Shinzo Abe has triggered a public backlash against the ruling party he led for years.

A photograph of former Prime Minister Shinzo Abe at a makeshift memorial at the Liberal Democratic Party (LDP) headquarters in Tokyo, Japan, on July 11, 2022.

Some opposition lawmakers are boycotting Tuesday’s state funeral and a man set himself alight in an apparent protest against the $12 million event, to be attended by foreign dignitaries including US Vice President Kamala Harris and Indian Prime Minister Narendra Modi.

Here is what you need to know about why the funeral for Abe – Japan’s divisive but longest-serving premier – has become a lightning rod for public anger. (Read more)