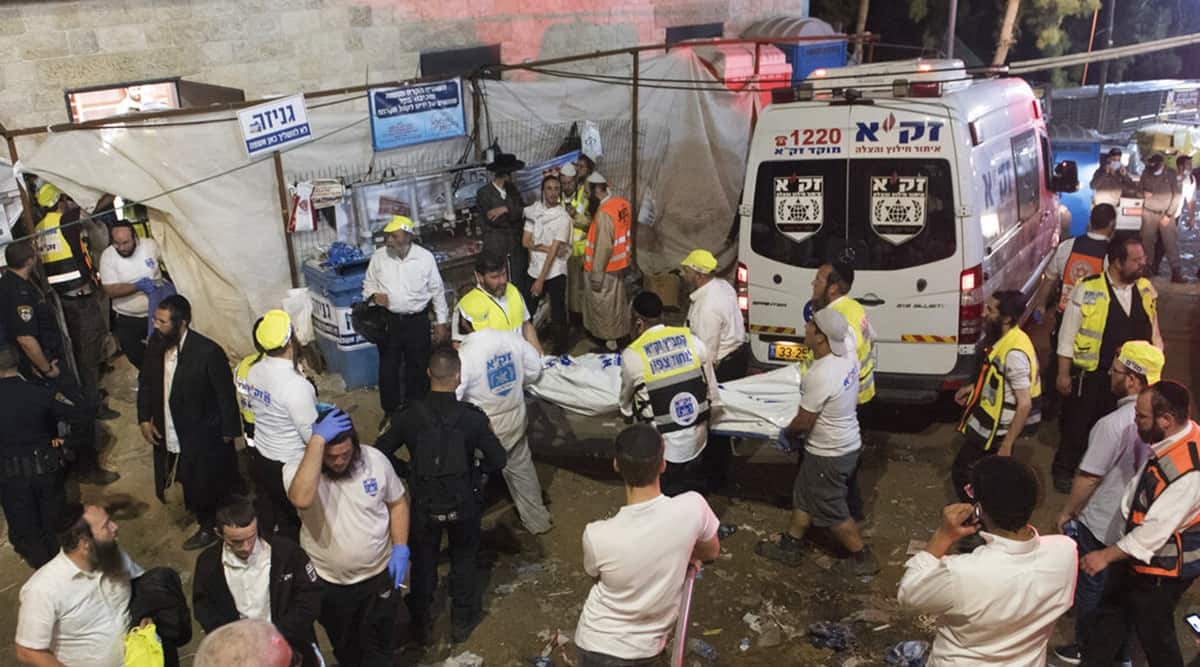 Israeli security officials and rescuers carry a body of a victim who died during a Lag Ba'Omer celebrations at Mt. Meron in northern Israel, Friday, April 30, 2021. (AP)

A state inquiry into a stampede in April at a Jewish pilgrimage site that killed 45 people, among them U.S. and Canadian citizens, began hearing testimonies on Sunday to determine what led to Israel’s worst civilian disaster.

Tens of thousands of ultra-Orthodox Jews thronged the Galilee hillside tomb of second-century sage Rabbi Shimon Bar Yochai on April 30 for the annual Lag B’Omer festival that includes all-night prayer, mystical songs and dance. During the ceremony, part of the crowd surged into a narrow tunnel and 45 men and boys were asphyxiated or trampled.

Israel’s government watchdog years ago deemed the Mount Meron site hazardous. Although the number of worshippers this year at the site was lower than in previous years, it was still beyond those permitted at the time by Covid-19 curbs.

Some Israelis had questioned whether the former government under Benjamin Netanyahu and police were reluctant to further limit the crowd size because of pressure from influential ultra-Orthodox leaders.

Netanyahu had promised a thorough investigation, but his cabinet, which included ultra-Orthodox ministers, never took formal action and major hostilities between Israel and the Palestinian militant group Hamas broke out less than two weeks later.

Launched shortly after a new government was sworn in, the state commission of inquiry holds court powers in that it can summon witnesses and require them to produce documents or any other evidence it deems relevant. Its findings will be presented to the government though they are not legally binding.

The hearings are open to the public and will be streamed online.

If the panel, headed by a former Super Court chief, were to find suspicions of criminal conduct it would have to report those to the Israeli attorney general. Its first witness on Sunday was the police Northern District Commander Shimon Lavi.

“Not a night goes by in which my mind doesn’t race with thoughts of what I could have done differently,” Lavi told the three-seat panel. “Meron was neglected for years.”

IP certifications: What do they mean and how to decode them