Ivanka Trump urged voters to look beyond her father’s rhetoric and tone and judge him for his policies. “I recognize that my dad’s communication style is not to everyone’s taste. And I know his tweets can feel a bit unfiltered,” she said. “But the results speak for themselves.” 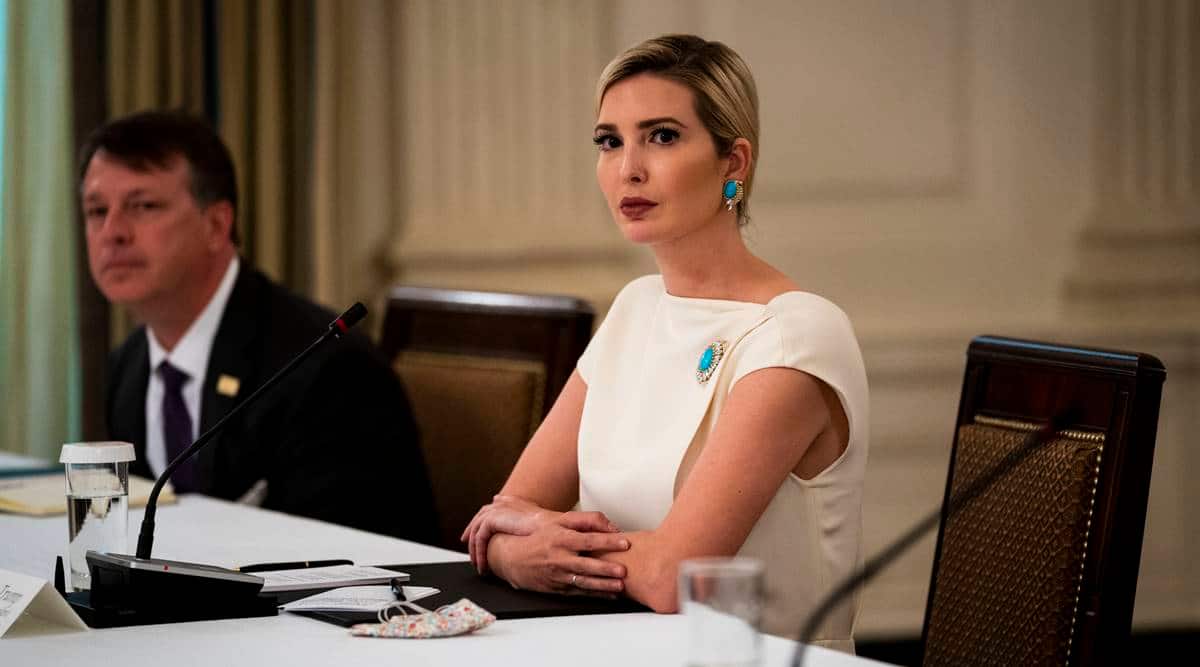 On night four of the Republican National Convention, viewers knew her as “The Honorable Ivanka Trump.”

The title was a nod to her senior role in the White House (though official titular etiquette is somewhat unclear). The speaking gig was not. While the White House insists she was appearing “on her own time,” and only in her capacity as President Donald Trump’s eldest daughter, Ivanka Trump introduced the president Thursday evening before he addresses the convention from the White House lawn, an overtly political use of federal property and potential violation of the Hatch Act.

For Ivanka Trump, who has spent the past few years flitting between her dual roles as first daughter and senior adviser, these are little more than details.

It is in many ways a fitting framework for her appearance, underscoring the extent to which she has unabashedly embraced the near-nonexistent lines between the personal, political and governmental that have defined her father’s approach to politics almost as much as the divisiveness his brand thrives on.

Ivanka Trump’s perceived distance from that part of his brand was once her greatest asset. Her 2016 convention appearance, for example, was intended in large part to reach suburban women. The campaign believed they might see the president’s eldest daughter as a more centrist and professional counterpart to a firebrand candidate with a history of misogynistic behavior. And ahead of Thursday, as the penultimate act of a convention that has already been tailored in large part to such women, aides were hopeful she could reach the same audience and communicate a similar appeal.

Trump urged voters to look beyond her father’s rhetoric and tone and judge him for his policies. “I recognize that my dad’s communication style is not to everyone’s taste. And I know his tweets can feel a bit unfiltered,” she said. “But the results speak for themselves.”

She cited her own work in increasing the child care tax credit and said the president had fulfilled his promise to “support mothers in the workforce.”

“Four years ago, I told you I would fight alongside my father,” Trump said, “and four years later, here I am.

In 2016, Trump was one of the campaign’s most requested surrogates, her cosmopolitan affect and apolitical rhetoric serving as a balm of sorts for women who might have been drawn to the idea of a businessman in the White House but would never be caught dead chanting “Build the wall!” Yet she kept a light footprint on the trail.

Now, however, she is eager to do more for her father’s reelection bid, fully embracing an explicitly political role. For Donald Trump’s campaign, the question is whether Ivanka Trump’s transformation will complicate her pitch to moderate Republicans and swing voters who once liked that she seemed to be more of a check than a rubber stamp on her father’s agenda.

“When voters look at Ivanka in and of herself and the issues she focuses on, they generally have a positive response to her,” said Lorna Romero, a GOP strategist in Arizona, where the president’s chances in November likely hinge on moderate Republican women, many of whom have felt alienated from the party under Donald Trump.

“Four years later, they recognize how, not just as his daughter, but as his senior adviser, she is going along with the president’s rhetoric and policies they’re not supportive of,” she went on. “It’s a more conflicted opinion.”

When Ivanka Trump made her political debut in 2016, voters who only knew her name from “The Apprentice” or from a rack of accessibly priced sheath dresses at Macy’s were subtly encouraged by the campaign to see in her a moderating influence. While her father was toying with a Muslim travel ban, or suggesting that Russian officials look into Hillary Clinton’s emails, Trump was discussing the punishing cost of child care and her passion for women’s issues in the pages of Harper’s Bazaar.

The campaign was confident that women might see her silence on the most controversial elements of her father’s campaign as daughterly deference to the tactics needed to win an election, rather than tacit approval.

Ivanka Trump now has the burden of the incumbency, nearly four years by which voters may judge whether the original cornerstones of her appeal — a moderating effect, a stated commitment to a more progressive agenda on issues like climate change — have in fact borne out.

In March 2017, “Saturday Night Live” aired a sketch that called her “complicit” in the administration’s early actions, such as a Muslim travel ban, and since then Trump has complained privately about the “moderating influence” moniker, arguing it was an image foisted upon her by others that never reflected her own views. This is in many ways accurate: At no point in her father’s 2016 campaign did Trump suggest she was against, say, building a wall along the southern border, “locking up” his opponent or any other element at the core of his candidacy.

Whether this softer public image was accurate or not, it is also true that early on in her White House tenure, Ivanka Trump cared a great deal about protecting it. She made clear her support of the Paris climate accord and her attempts to prevent her father from withdrawing from the pact, which were ultimately unsuccessful. Coverage of the first daughter often included anonymous quotes — from people described as close to the family and familiar with her thoughts — revealing her disapproval of whatever firestorm had just engulfed the West Wing.

At a certain point, however, Trump seemed to tire of maintaining the pretense of being a responsible stewardess of taxpayer dollars. If her constructed identity was meant to keep suburban women with the president, the midterm elections in 2018 showed it wasn’t working.

With that clear, she appeared to change her own behavior, becoming more comfortable publicly embracing what proximity to the leader of the free world had to offer: hobnobbing with foreign leaders during high-profile trips overseas, joining her father for a historic exchange with the North Korean dictator Kim Jong Un in the Demilitarized Zone. For many of those ventures, even Trump herself may have struggled to articulate why her presence was necessary, how her portfolio of women’s economic empowerment bore relevance. But she increasingly felt less obligated to try. (On that June day in Seoul, she told reporters that “women will play an enormous role” in ushering in “peace” for the peninsula.)

“She is certainly an unconventional first daughter,” said Douglas Brinkley, a presidential historian at Rice University. “She seems to have endless access to anything and everything that goes on in the White House — she’s actually serving in many ways as a second first lady. We’ve never had that before.”

On a policy front, despite early setbacks, Trump has notched victories such as increasing the child tax credit as part of the president’s tax cuts in 2017. She has also rallied many Republicans behind the goal of passing paid family leave legislation, a topic that before Donald Trump’s tenure rarely gained momentum in GOP circles.

But any strides she has made as a bipartisan convener have at times been overshadowed by her increasing willingness to enter the political fray, an arena she was once content to let the rest of her family, especially her brother Donald Trump Jr., navigate without her.

Earlier this year, she embarked on a more active role in her father’s reelection bid. She attended the Conservative Political Action Conference, an annual gathering of conservative activists, and went on to schedule multicity fundraising swings, relishing in her ability, as she put it, to raise “record-shattering” amounts for the campaign.

She now frequently uses her Twitter feed to defend her father, a stark contrast from the posed family photos and occasional policy thoughts she once shared. In October 2019, as the House moved forward with impeachment proceedings against her father, Trump shared a Thomas Jefferson quote about the “enemies and spies” among his political opposition. In July, she tweeted a photo of herself holding a can of Goya beans, praising the brand after its CEO’s support for the president sparked calls for a boycott.

In introducing her father Thursday, Trump sounded many of the same notes as she did in 2016, reassuring voters of the president’s commitment to helping working families, as well as her own dedication to women’s empowerment and the kitchen-table issues that transcend party lines.

This time, she will leave no doubt about the precise nature of her political identity, and to what extent it aligns with her father’s. As she officially announced earlier this year, Trump is now a “proud Trump Republican.”