A funeral procession carrying the remains of soldiers recently recovered from former battlefields snaked through the capital, Tehran, while other victims were returned to another two dozen provinces. Mourners carry flag-draped caskets of unknown soldiers who were killed during the 1980-88 Iran-Iraq war, whose remains were recently recovered from former battlefields, during their funeral procession in Tehran, Iran, Thursday, Jan. 6, 2022. (AP)

Thousands of mourners poured into the streets of Iranian cities on Thursday for the mass funeral of 250 victims of the Iran-Iraq war, a testament to the brutal conflict’s widespread scale and enduring legacy 35 years later.

A funeral procession carrying the remains of soldiers recently recovered from former battlefields snaked through the capital, Tehran, while other victims were returned to another two dozen provinces. Although Iran and Iraq sporadically exchange war dead excavated from borderlands that witnessed major combat in the 1980s, Thursday marked the largest such ceremony in recent years.

While serving as remembrance for a country routinely consumed in mourning over the grisly war that killed a million people on both sides, the patriotic extravaganza also demonstrated the power of the Iranian hard-liners who organized it, as the country’s diplomats met in Vienna for talks over Tehran’s tattered nuclear deal.

With conservatives under President Ebrahim Raisi in control of all branches of government, Iran has presented maximalist demands at the negotiating table, exasperating Western delegates as the country presses its nuclear advances. Meanwhile, tensions have ratcheted up across the region — hostility with roots in US support for Iraq in the eight-year war. 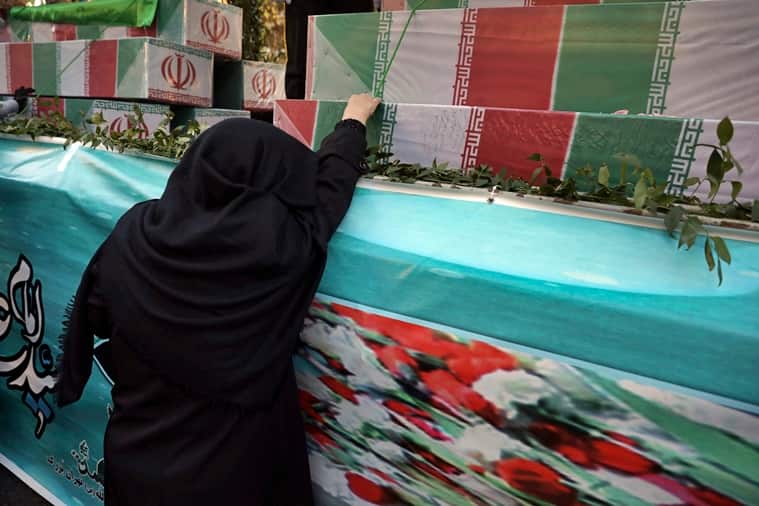 An Iranian woman mourns next to flag-draped caskets of unknown soldiers who were killed during the 1980-88 Iran-Iraq war, whose remains were recently recovered from former battlefields, during their funeral in Tehran, Iran, Thursday, Jan. 6, 2022. Thousands of mourners poured into the streets of Iranian cities on Thursday for the mass funeral of 250 victims of the war, a testament to the brutal conflict’s widespread scale and enduring legacy 35 years later. (AP Photo/Vahid Salemi)

The funeral also comes just days before Iran marks the two-year anniversary of the Iranian military’s downing of a Ukrainian passenger plane with two surface-to-air missiles, killing all 176 people on board — a tragedy that ignited an outburst of unrest across Iran and further damaged its relations with the West.

Outside of Tehran University, trucks piled high with flag-draped coffins made their way through the streets. Men and women in black thronged the coffins, many weeping for those lost in the bloody, stalemated war started by Saddam Hussein and his Baath Party in 1980.

It was the first time in recent years that Iran honored the interment of so many 1980s war dead at once. Hassan Hassanzadeh, a Revolutionary Guard general, told state TV that Iran had planned the mass funeral two years ago but pushed it back because of the coronavirus pandemic that has devastated the country. Infections have declined in recent weeks as vaccination accelerates.

Thursday’s ceremony, also commemorating the death of the Prophet Muhammad’s daughter, Fatima, came as social media in Iran was awash with hashtags and images commemorating the crash of the Ukrainian plane that shocked the world on Jan. 8 2020. For days as Iran and the US teetered on the verge of war, the paramilitary Guard denied downing the plane, ultimately deepening public mistrust and unleashing popular anger in Iran.

This week, hard-liners have been pumping out photos and slogans on Twitter to show solidarity with the recovered Iranian war dead.

Supreme Leader Ayatollah Ali Khamenei praised the soldiers and offered his support to the family members of victims, Iranian media reported. His conservative protégé, President Raisi, paid his respects at the funeral.

Most of the victims’ remains were recovered from the southwest border area of Shalamcheh, some 400 miles from Tehran, state TV reported, one of the main war-ravaged sites of Hussein’s surprise invasion. Many were killed in Iran’s offensive called “Karbala 5” in January 1987 — the war’s bloodiest battle that killed up to 19,000 Iranians who struggled to win back some 60 square miles of the country’s territory.

None of the victims’ remains returned Thursday were identified. The tombstones read “anonymous martyr.” For many Iranian families, the conflict’s painful legacy drags on in continuous waiting for news of loved ones still “missing.”

The war that shaped the young theocracy after the 1979 Islamic Revolution continues to haunt Iran. Most of the country’s top officials either fought or contributed to the vast war effort. The military sent legions of young conscripts to the battlefields, including those who dropped out of high school to join the volunteer force and never returned.

American support for Saddam’s forces during the war, as Iraq unleashed thousands of chemical bombs against Iranians, also helped fuel wariness between Iran and the US that persists today.