No passports, no money: 62 Indians stranded in Sudan ask, ‘how do we exit the country?’

A few weeks ago, the employees at both RAK Ceramics and Al Masa porcelain factory desperately contacted the Indian embassy in Khartoum, asking for help. 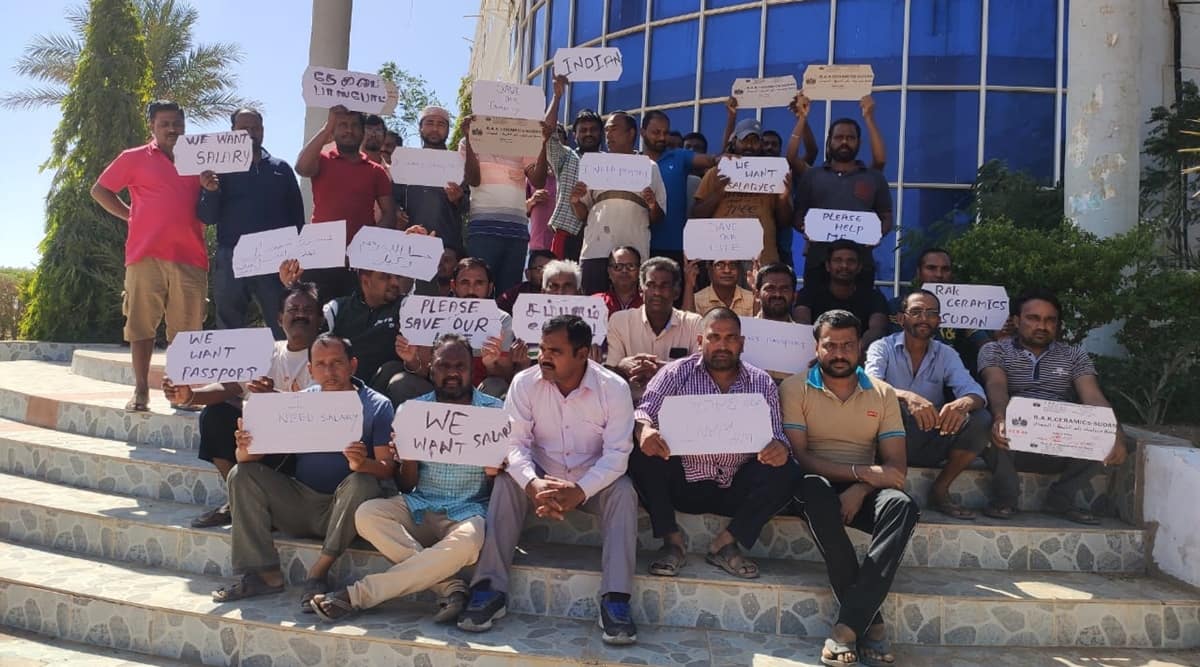 Employees at the RAK Ceramics factory located outside Khartoum, Sudan, hold placards asking for assistance and demanding that their passports be returned to them. Photo credit: Virendra Pratap Varma

Salaries withheld, passports taken away and money fast running out: for the 62 Indian nationals working for Nobles Group, one of Sudan’s largest ceramic tile manufacturers, life has been difficult since they landed in the republic. Their problems only got worse after the military coup in October, following which the company’s Sudanese owner Muhammad Al-Mamoun absconded to the Middle East, and the company was taken over by the military government.

“I haven’t gotten my salary for one year and they don’t give us proper food. In this company, 25 people are working and none of us have gotten our salaries,” said Maruthi Ram Dandapani, an Indian employee at the Al Masa porcelain factory, located in the Albagair industrial area in the outskirts of the capital Khartoum.

Some 80 km away, at the RAK Ceramics factory, owned by Nobles Group, in the Garri Industrial Area, now under military-government control, the same story has been playing out for months. 41 Indian nationals working at this location have not been paid for close to a year. It is not just the withholding of the salaries that has caused difficulties for these workers: the company has also withheld their passports, locking them in the company’s headquarters in Khartoum, citing company policy, preventing them from leaving Sudan, employees told indianexpress.com.

“When I first came here, one month passed and we asked our general manager for the salary. She kept giving excuses that it would be given next month. Then more time passed,” said Raju Shetty, a Karnataka resident who arrived in the country approximately eight months ago. “They said they didn’t have funds. Then four months after we chased them, they paid us one month’s salary. Then two more months passed in discussions. Just when they said they were going to pay us, the coup happened and the manager said the government seized the property. This is the situation,” Shetty explained.

Employees from across India who had been recruited to work at these factories owned by Nobles Group in Sudan, said that their families were dependent on their salaries to pay for everyday necessities and bills. After the company stopped paying these workers, their families back home struggled financially. “This salary pays for everything. I don’t have any other source of income,” Shetty said.

Where these employees had hoped to sustain their families back home, since October, it is the families who have been sustaining them, by sending small sums of money to Sudan so that the men can pay for food and water. “Sometimes we end up not eating all day or we eat once a day. Sometimes we get dal with rice, sometimes there is vegetable but no dal,” said Upendra Pandey who has been working at the RAK Ceramics factory. One employee told indianexpress.com that they had resorted to selling old machine parts to scrap dealers so that they could purchase food from the local market located some 5 km away.

A carton with the name of the Sudanese company, RAK Ceramics, printed on top. Photo credit: Upendra Pandey

Details publicly available about Muhammad Al-Mamoun, the company’s owner, are scant but till the coup, he owned a diversified business in Sudan, with investments in railways, shipping, petrochemicals, agriculture, tile manufacturing, in addition to other interests. In a Facebook page that Sudanese journalists told indianexpress.com was legitimate, the Empowerment Removal Committee, the country’s anti-corruption committee confiscating property acquired through illegitimate means, listed a detailed report of why Al-Mamoun’s funds, movables, real estate and property were retrieved by the government and why criminal proceedings had been initiated against him and his associates.

A few weeks ago, the employees at both RAK Ceramics and Al Masa porcelain factory desperately contacted the Indian embassy in Khartoum, asking for help, but more importantly, demanding that their passports be returned to them. “They are saying it will happen but we don’t know what they are doing. Two weeks ago, we spoke to the embassy and they told us that it would take time, but they don’t know how long,” Pandey said. The Indian embassy in Sudan did not respond to indianexpress.com’s requests for comment.

25 Indian nationals working at the Al Masa porcelain factory, located in the Albagair industrial area in the outskirts of the capital Khartoum, say they have not been paid their salaries for over a year. Photo credit: Maruthi Ram Dandapani

There may not be much that the embassy can do, given the country’s domestic upheaval. Following his release from house arrest in late November, on December 1, Prime Minister Abdallah Hamdok assigned undersecretaries to run the 20 federal ministries until new ministers are selected. Employees at both factories told indianexpress.com that while the embassy had been attempting to liaise with the Sudanese government, their everyday difficulties were not abating.

The lack of proper food, the acute financial strain and uncertainty has impacted their mental and physical health, some employees told indianexpress.com. “A few days ago, someone tried to jump from the terrace. We somehow managed to stop him. We tried explaining to him, but he said that his family was facing difficulties and here he had his own set of problems,” said Virendra Pratap Varma. “All that the employees keep saying is ‘we just want to go back’. We are just trying to find ways to leave this place but we aren’t getting the opportunity.”

There is also anger towards their Indian supervisor Srinivas Rao, who, they say, misled them. “The supervisor made us work without pay for months, saying that we would eventually get paid. The other day embassy officials came and he got told off by them for leading us on. The officials told him that he should have made sure we got paid,” said Varma. Employees told indianexpress.com that the company had pressured them to work without pay for months. Thinking of their dependent families, they continued, hoping that the financial issues would be resolved. Rao did not respond to indianexpress.com’s requests for comment.

When arguments broke out between the supervisor and the employees over the difficulties they were facing, he threatened to leave them stranded in Sudan, the employees told indianexpress.com. “He returned from India some five to six months ago, so he has his visa and passport with him; the company didn’t get a chance to take it from him. He told us that he can leave the country at any time. He taunted us saying ‘your visa passports are not with you, how will you leave?’ We are afraid of what will happen to us if he leaves,” Varma said.

A few days ago when officials from the Indian embassy visited the employees, they complained about the supervisor’s threats. “The embassy also told us to keep watch so that he doesn’t run away. Because if he leaves, the embassy is concerned about how we will continue to live here. Now we just believe that the embassy will do something,” Varma said.

Employees at the RAK Ceramics factory located outside Khartoum, Sudan, hold placards asking for assistance and demanding that their passports be returned to them. Photo credit: Virendra Pratap Varma

The Indian embassy, employees said, gave them some 1,00,000 Sudanese Pounds, to tide them over, till a more permanent resolution can be found. They have been rationing meals, to make the money last longer. But the employees told indianexpress.com that they are concerned about the money running out and worse, someone falling sick, requiring medical attention. Both factories are located in relatively remote areas, where for miles the employees can only see large swathes of sand. “We don’t have cars to take someone to the hospital if they fall sick. The nearest hospital is 7 kms away and we can’t walk there,” said Varma.

The lack of communication and assistance from the company and the coup has only complicated the situation for these Indian nationals. Shetty told indianexpress.com that their visas have a validity of two months after which it requires renewal, a process that had previously been undertaken by the company. When exiting the country, Sudan requires workers to pay fines for each day they overstay their visa, which may amount to nearly an entire month’s salary if the situation drags on for longer.

“The company could have converted it into a residence visa but they did not do that. They could have gotten an extension for one year that would cost Rs. 5,000, but they did not do that. Now I may have to pay Rs. 15,000 to 20,000 as fines, maybe more. Immigration asks you to pay those fines and only then they will let us go. How do we exit the country?” Shetty asked.

The complexity of their situation and the feeling of abandonment has left the group in both factories in despair and fear. “Unless we pay those fines, we won’t be allowed to leave the country. Who will give us so much money?” asked Pandey. “We don’t know how long we have to carry on like this. Nobody is able to sleep at night. we are going mental here,” said Varma.