How China increased its naval fleet in Asian waters

Since 2012, China's navy has taken delivery of 41 Type 056 Corvettes with production continuing, according to IISS. A total of between 45 and 60 of these ships are expected to join the fleet. 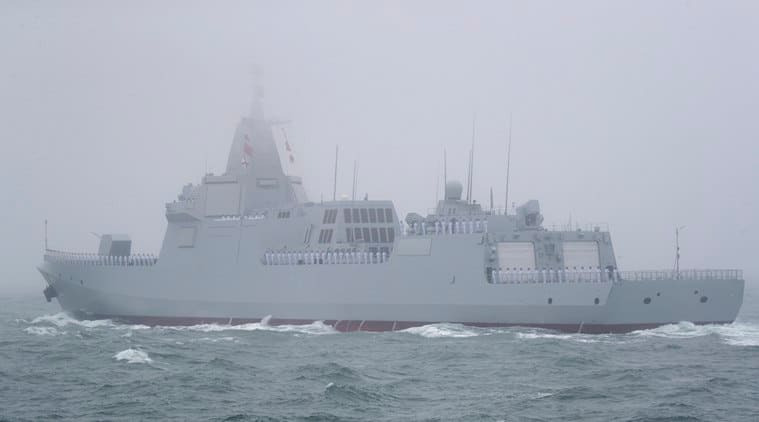 The new type 055 guided-missile destroyer Nanchang of the Chinese People’s Liberation Army (PLA) Navy participates in a naval parade to commemorate the 70th anniversary of the founding of China’s PLA Navy in the sea near Qingdao. (AP Photo)

It took time for China’s naval shipyards to hit their straps. For about a decade from the turn of this century, they experimented with new designs, in some cases launching just a couple of each new type of warship for evaluation.

The yards absorbed foreign technology, imported some key components and developed local know-how. Quality ruled over quantity. Then they started mass production. New hulls cascaded into the water, mainly from the big shipyards at Shanghai, Dalian, Guangzhou and Wuhan.

These yards have been building the full spectrum of warships and support vessels, according to Pentagon estimates, analysis from private Western defense information providers and reports in the official Chinese military media.

In 2014, China began building, launched or commissioned more than 60 warships or craft, according to a 2015 report from the US Office of Naval Intelligence.

In 2016, China commissioned 25 surface warships according to figures from the London-based International Institute for Strategic Studies (IISS).

Since 2012, China’s navy has taken delivery of 41 Type 056 Corvettes with production continuing, according to IISS. A total of between 45 and 60 of these ships are expected to join the fleet.

In the past decade, China has commissioned more than 28 of its most advanced Type 054A frigates, according to IISS.
The first Type 052D destroyer, a capable vessel expected to become the workhorse of the fleet, was commissioned in 2014. There are 10 in service and Western naval analysts expect a total of about 20 to be in service by 2020.

Chinese shipyards have launched four Type 055 destroyers with up to 12 of these ships expected to be in service by 2026.

Between 2010 and 2016, the shipyards delivered about 21 nuclear and conventional submarines, IISS said. According to IISS, China has 58 submarines. The Pentagon forecasts it will have a fleet of up to 78 by 2020.

Production of the Type 022, guided missile fast attack craft appears to have ended with 60 of these wave-piercing, catamaran-hulled vessels delivered to the fleet.

To boost amphibious landing capability, the first Type 075 helicopter landing ship is under construction, according to Chinese media reports. The 40,000-tonne vessel will reportedly have six helicopter landing zones on its flight deck. Up to three of these vessels could eventually join the fleet. The fifth, 20,000-tonne, Type 071 amphibious transport ship was commissioned last year.

Yoga and spirituality give children the freedom to be curious