The EU statistical agency Eurostat said Wednesday that following the outbreak of the COVID-19 pandemic last year, life expectancy at birth fell in the vast majority of the EU member states. Vaccines experts are particularly curious to see CureVac’s results because its shot has an important advantage over the other RNA vaccines from Moderna and Pfizer-BioNTech.(Jacob King/PA via AP)

The EU’s drug regulator says it has found a “possible link” between the AstraZeneca coronavirus vaccine and a rare clotting disorder but said that the benefits of the shot still outweigh risks.

In a statement released Wednesday, the European Medicines Agency placed no new restrictions on using the vaccine in people 18 and over.

Earlier this week, a senior official from the European Medicines Agency said there was a causal link between the AstraZeneca vaccine and the rare clots that have been seen in dozens of people worldwide, among the tens of millions who have received at least one dose of the shot.

Marco Cavaleri, head of health threats and vaccine strategy at the Amsterdam-based agency, said in comments to Rome’s Il Messaggero newspaper on Tuesday that “it is becoming more and more difficult to affirm that there isn’t a cause-and-effect relationship between AstraZeneca vaccines and the very rare cases of blood clots associated with a low level of platelets.”

But Cavaleri acknowledged the agency hadn’t yet figured out how exactly the vaccine might be causing these rare side effects. The agency said its evaluation “has not yet reached a conclusion and the review is currently ongoing.”

Last week, the EU medicines regulator said there is no evidence that would support restricting the use of this vaccine in any population, though an expert said more brain clots were being reported than would be expected and it would continue to assess incoming data.

Any further doubts about the AstraZeneca vaccine would be a setback for the shot which is critical to Europe’s immunisation campaign and a linchpin in the global strategy to get vaccines to poorer countries. The AstraZeneca vaccine is cheaper and easier to use than rival vaccines from Pfizer-BioNTech and Moderna and has been endorsed for use in more than 50 countries, including by the 27-nation EU and WHO.

The UK is administering the first doses of the Moderna vaccine – the third authorized in the country against the coronavirus. Patients at the West Wales General Hospital were receiving the jab on Wednesday.

Britain has ordered 17 million doses of the Moderna vaccine enough for 85 million people. 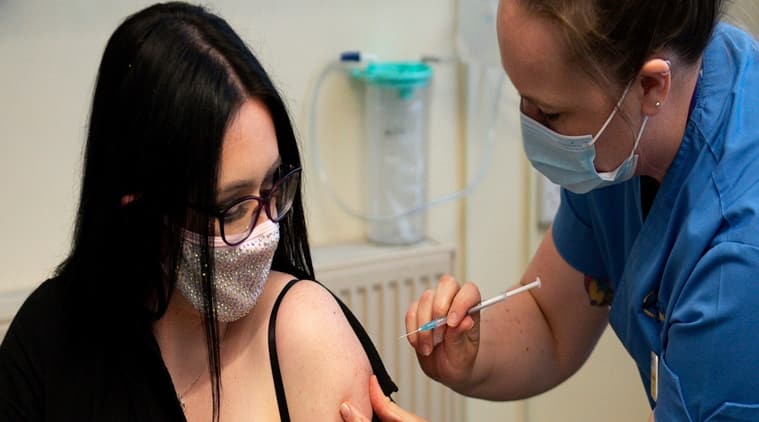 Elle Taylor, 24, an unpaid carer from Ammanford, receives the first injection of the Moderna vaccine to be administered in Britain by nurse Laura French, at the West Wales General Hospital in Carmarthen, Wales, Wednesday April 7, 2021.(Jacob King/Pool via AP)

The rollout comes as the UK medical regulator investigates another vaccine made by Oxford University and AstraZeneca which has been given to more than 18 million people in Britain.

Drop in life expectancy in most EU countries amid COVID-19

Life expectancy across much of the European Union has dropped last year as the 27-nation bloc struggled with the impact of the coronavirus pandemic.

The EU statistical agency Eurostat said Wednesday that following the outbreak of the COVID-19 pandemic last year, life expectancy at birth fell in the vast majority of the EU member states.

It said the biggest drop was in Spain with a loss of 16 years compared with 2019. Bulgaria followed with a loss of 15 years, followed by Lithuania, Poland and Romania which all saw a drop of 14 years. Denmark and Finland were the only nations to see a rise in life expectancy with 1 year each.

Czech Prime Minster Andrej Babis fired his health minister on Wednesday, the third health minister who has been ousted during the pandemic in one of Europe’s hardest-hit countries. Jan Blatny was replaced by Petr Arenberger, the director of Prague’s University Hospital Vinohrady, who was sworn in by President Milos Zeman.

Babis repeatedly criticized Blatny over his handling of the pandemic, including imposing strict conditions for the use of experimental drugs to treat COVID-19 patients.

Blatny was also under fire from Zeman, an ally of Babis who is known for his pro-Russian and pro-Chinese views. Zeman asked the prime minister last month to replace Blatny over his refusal to allow the use of Russia’s Sputnik V vaccine because it has not been approved by the European Medicines Agency.

Blatny took office on Oct 29 to replace epidemiologist Roman Prymula, who was dismissed after he was photographed visiting a restaurant that should have been closed as part of the country’s restrictive measures. Blatny, a specialist in pediatric hematology, was deputy director of the University Hospital in the second largest Czech city of Brno before he became health minister.

South Korea suspends AstraZeneca shots for those under 60

South Korea said on Wednesday it will temporarily suspend providing AstraZeneca’s COVID-19 vaccine to people below 60 amid a European review, while approving a Johnson & Johnson shot in a bid to speed up its inoculation rollout. Global controversy over the efficacy and side-effects of some COVID-19 vaccines has caused some delays in South Korea’s vaccination campaign, which kicked off in late February with the goal of reaching herd immunity in November. South Korea’s food and drug safety ministry said on Wednesday it had granted final approval for Johnson & Johnson’s (J&J) vaccine after a panel of experts ruled the single-dose shot was safe and effective. J&J is the third COVID-19 vaccine maker to be authorised in South Korea, after AstraZeneca and Pfizer/BioNTech, both of which require two doses.

Authorities are seeking to speed up a national vaccination campaign despite global supply shortages while expanding preemptive testing and tracing efforts amid concerns over a potential fourth wave of infections.

Norway hopes to gradually unwind many restrictions related to the COVID-19 pandemic by the end of June, but must see a decline in infection rates and hospitalisations before it does so, Prime Minister Erna Solberg told parliament on Wednesday.

Solberg presented a four-step plan for easing Norway’s restrictions, and said the first three steps could be completed by the end of June, possibly removing many curbs on travel ahead of the summer holidays, unless new setbacks emerge. She did not say how long the fourth phase, which will still contain some restrictions, is estimated to last.

“Before we open up we need to see low and stable infection rates. It is important that the number of hospitalisations come down from today’s level,” Solberg said.

Norway has had some of Europe’s lowest rates of infections and deaths since the start of the pandemic early last year, but saw a rapid increase in hospitalisations in March led by more contagious variants of the coronavirus.

Philippine health authorities on Wednesday allowed the use of Sinovac’s COVID-19 vaccine for some senior citizens after initially limiting coverage to people aged 18-59 years, as the country battles one of Asia’s worst coronavirus outbreaks. The Department of Health and the Food and Drug Administration said they made the decision after receiving the recommendation of the Department of Science and Technology’s vaccine expert panel.

Senior citizens can now receive CoronaVac shots provided there is stringent evaluation of the person’s health status and exposure risk, they said in a statement.

A total of 922,898 doses of Sinovac and AstraZeneca vaccines have been administered so far to healthcare workers, senior citizens, and people with comorbidities, or just a third of the total local stocks, health ministry data showed.

Iran has shattered its daily record for new coronavirus infections for the second consecutive day, with 20,954 new cases reported on Wednesday. The country is in the midst of one of the most severe surges of the coronavirus to date, following a two-week public holiday for Nowruz, the Persian New Year, which drove millions to travel to vacation spots across the country and congregate in homes in defiance of government health guidelines. 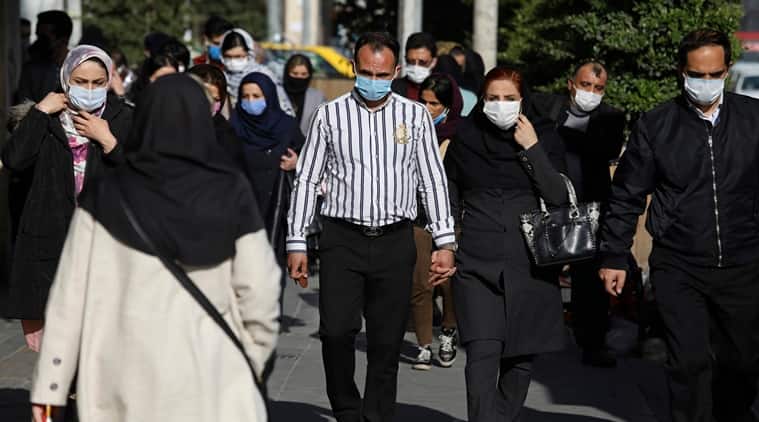 For months, Iran has struggled to curb the worst outbreak of the coronavirus in the Middle East.

Wednesday’s case count brought the total number of infected in the outbreak to 1,984,348, according to official figures. Iran Health Ministry spokeswoman Sima Sadat Lari says another 193 people had died in the past 24 hours, raising the country’s death toll to 63,699.

The European Commission said on Wednesday that delivery shortfalls of AstraZeneca’s COVID-19 vaccine were a global issue, not something to be addressed only in talks between the EU and Australia.

The comment followed Australia’s request to the EU to send AstraZeneca doses. Canberra has said the EU has blocked shipments, whereas the EU says AstraZeneca had not requested new authorisations for exports to Australia.

“We’re not the only region in the world producing AstraZeneca vaccines, and therefore this is a global issue. It is definitely not simply a bilateral issue between one country and the European Union,” a spokesman for the EU Commission told a news conference when asked about Australia’s request.

Deliveries of Moderna’s COVID-19 vaccine are on track to meet the number of doses it promised to the European Union, a spokesperson for the U.S.-based drugmaker said on Wednesday, following a report of delays in Germany.

“Moderna is committed to meeting all quarterly contractual delivery agreements with the European Commission and individual Member States,” the spokesperson said in an email to Reuters. “April deliveries are on track to meet the dose ranges previously communicated to governments.”

Moderna declined to release specifics about the monthly dose range bound for Europe, though it previously has confirmed 2021 deliveries would include 160 million doses for the EU and 17 million doses for Britain. Worldwide, it has committed to producing at least 700 million doses this year.