George HW Bush dead: Bush served as the nation's 41st president from 1989 to 1993 and he has served as US naval aviator during World War II. Follow HIGHLIGHTS below.

Former US President George H W Bush, died on Friday at the age of 94, a family spokesman said. Bush was the 41st president of the United States. His death was announced in a statement by family spokesman Jim McGrath. Bush had presided over the end of the Cold War and was responsible for routing Saddam Hussein’s Iraqi army but he lost his chance at a second term after breaking the ‘no new tax’ pledge.

The son of a senator, born in 1924, Bush holds a bachelor’s degree in economics from Yale University. Bush, who was a US naval aviator during World War II, served as the nation’s 41st president between 1989 to 1993.

His son George W Bush was later elected as the 43rd president. Bush’s died seven months after the death of his wife, former first lady Barbara Bush, to whom he was married for 73 years.

George HW Bush dead at 94: He served as the 41st United States President from 1989 to 1993. Follow HIGHLIGHTS below. Read the latest news in Tamil, Malayalam, Bengali

President Donald Trump canceled a news conference at the G20 summit in Buenos Aires on Saturday following the death of former President George H.W. Bush. "We will wait until after the funeral to have a press conference," Trump said in a tweet. The former president's funeral arrangements have yet to be made, according to Bush's spokesman.

....However, out of respect for the Bush Family and former President George H.W. Bush we will wait until after the funeral to have a press conference.

President Donald Trump will attend the state funeral of former president George H W Bush, who has died at 94, the White House said Saturday. Trump's spokeswoman said: "A state funeral is being arranged with all of the accompanying support and honours. The president will designate Wednesday, December 5th as a National Day Of Mourning. He and the first lady will attend the funeral at the National Cathedral in Washington, DC."

George HW Bush was a leading statesman at a critical period of world history: PM Modi

Prime Minister Narendra Modi expressed Condolences to the Bush family and the people of USA on the passing away of former President George H .W. Bush. Modi said, "he was a leading statesman at a critical period of world history."

Former President George H. W. Bush was passionate about strong relations between India and USA. His presence will be sorely missed. May he rest in peace.

Bush tried to ``create a new international order based on justice and equality among nations'' ... he never ``forgot the Kuwaiti people and will remain in their memory.'' _ Kuwait's ruling emir, Sheikh Sabah Al Ahmad Al Sabah

``Remembering President George H.W. Bush and the Americans With Disabilities Act. Millions of with Disabilities and who are Deaf or HOH (hard of hearing) lives have been changed for the better as a result of his signing this landmark legislation. My condolences to his entire family RIP (hash)georgehwbush.'' _ Actress Marlee Matlin, who herself is deaf, via Twitter

``As an American envoy to Beijing, as CIA Director, as Vice President for eight years and then four years as President, George H.W. Bush's statesmanship played a key role in helping to end the Cold War, which bought democracy to millions of people in Europe and diminished the threat of nuclear war. George H.W. Bush was a strong supporter of the international rules-based system, the rule of law and democratic values.'' _ New Zealand Prime Minister Jacinda Ardern

``He was in fact the first American President that I was privileged to meet. I recall being deeply touched by your father's concern for the Tibetan people and the situation in Tibet. It is truly admirable to have lived over 94 years. While nothing can replace the loss of a father, we can rejoice in the fact that his was a meaningful life, dedicated to public service. I commend your parents for encouraging their children, including you my dear friend, to devote yourselves to the service of others.'' _ Tibetan spiritual leader, the Dalai Lama

Beyond a desire to be president — Bush was more competitive and ambitious than his self-effacing personality sometimes suggested — there is almost nothing in common: the one gracious and modest, the other rude and vain; the one prudent, the other brash; the one steady, the other unmoored. 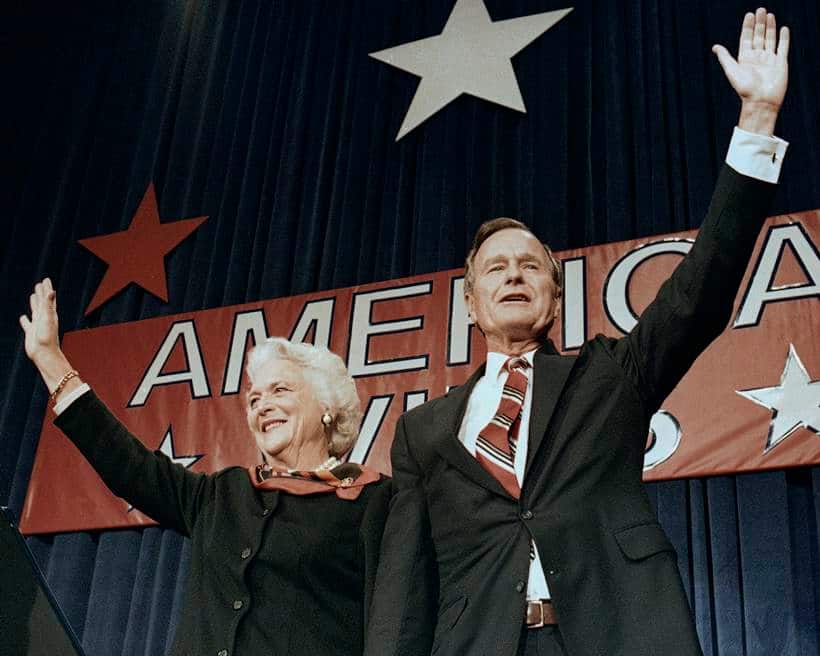 Who was George H W Bush?

Born in 1924 in Massachusetts, he enlisted in the Navy on his 18th birthday. One of the youngest pilots in the Navy, he flew 58 missions off the carrier USS San Jacinto. An American submarine recused Bush after he was shot down in 1994 while completing a bombing run against a Japanese radio tower.

Was elected as the 41st president of the United States in 1989 through 1993. The World War II hero presided over the end of the Cold War and drove away Saddam Hussein’s Iraqi army. He couldn’t, however, seek a second term after his popularity plummeted after he broke his promise of no new taxes. He lost his bid for re-election to Bill Clinton.

Remembering Former US President George H. W. Bush, a war veteran, a father, a husband, a President & a great leader. Our thoughts & prayers are with his family at this time. pic.twitter.com/aU8WXANIR6

Hillary and I mourn the passing of President George H. W. Bush, and give thanks for his great long life of service, love and friendship. I am grateful for every minute I spent with him and will always hold our friendship as one of my life’s greatest gifts. https://t.co/1CYdrIeKmz

America has lost a patriot and humble servant in George Herbert Walker Bush. While our hearts are heavy today, they are also filled with gratitude. Our thoughts are with the entire Bush family tonight – and all who were inspired by George and Barbara’s example. pic.twitter.com/g9OUPu2pjY

In 2005, Bush teamed with Clinton to raise million of dollars for victims of Hurricane Katrina

Once out of office, Bush was content to remain on the sidelines, except for an occasional speech or paid appearance and visits abroad. He backed Clinton on the North American Free Trade Agreement, which had its genesis during his own presidency. He visited the Middle East, where he was revered for his defense of Kuwait. And he returned to China, where he was welcomed as “an old friend” from his days as the US ambassador there.

He later teamed with Clinton to raise tens of millions of dollars for victims of a 2004 tsunami in the Indian Ocean and Hurricane Katrina, which swamped New Orleans and the Gulf Coast in 2005. During their wide-ranging travels, the political odd couple grew close. (AP)

The son of a senator and father of a president, Bush was the man with the golden resume who rose through the political ranks: from congressman to UN ambassador, Republican Party chairman to envoy to China, CIA director to two-term vice president under the hugely popular Ronald Reagan. The 1991 Gulf War stoked his popularity. But Bush would acknowledge that he had trouble articulating “the vision thing,” and he was haunted by his decision to break a stern, solemn vow he made to voters: “Read my lips. No new taxes.”

He lost his bid for re-election to Bill Clinton in a campaign in which businessman H. Ross Perot took almost 19 percent of the vote as an independent candidate. Still, he lived to see his son, George W, twice elected to the presidency — only the second father-and-son chief executives, following John Adams and John Quincy Adams. (AP)

Hello. Welcome to our LIVE blog... Follow our blog for all the latest updates.

George H W Bush's passing comes just months after the death in April of his wife and revered first lady Barbara Bush, to whom he was married for 73 years. George HW Bush had enlisted in the Navy on his 18th birthday in 1942, right out of prep school. He returned home to marry his 19-year-old sweetheart, Barbara Pierce, daughter of the publisher of McCall’s magazine, in January 1945.

The 41st president of the United States, Bush served from 1989 to 1993. The World War II hero presided over the end of the Cold War and drove away Saddam Hussein’s Iraqi army. He couldn’t, however, seek a second term after his popularity plummeted after he broke his promise of no new taxes.