The play called “Pardon?” is drawn from the French author and actor's own life, describing how he felt devoured from the inside by the abuse. 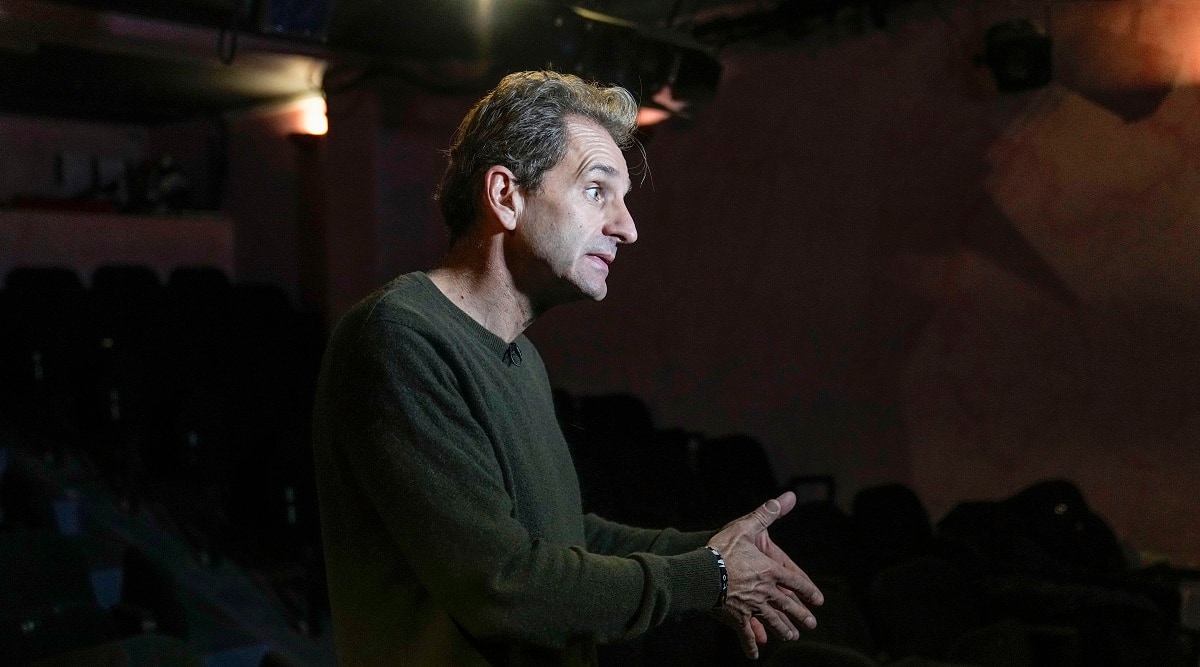 Author and actor Laurent Martinez gestures as he speaks during an interview with The Associated-Press at "Theo Theater" in Paris. (AP)

At the age of eight, Laurent Martinez was sexually abused by a priest. Forty years later, he has chosen to make his story into a play, to show the devastating consequences and how speaking out can help victims heal and rebuild.

The play called “Pardon?” is drawn from the French author and actor’s own life, describing how he felt devoured from the inside by the abuse and struggled with daily life after it.

Martinez’s play was shown to bishops earlier this year, ahead of the presentation of a groundbreaking report last week that estimated that about 330,000 children in France were sexually abused over the past 70 years within France’s Catholic Church.

Despite the shocking revelations, Martinez deplored that “there is no — absolutely no — sense of urgency” within the church.

For Martinez, now 52, memories of the abuse remain vivid.

The priest who was teaching his catechism classes found pretexts to see the 8-year-old Martinez alone, kissing and touching his genitals, he said. One day, Martinez recalls, the abuser invited him to his apartment and forced the boy to engage in oral sex. Under French law, that would be classified as rape.

Martinez later told his parents, who alerted the diocese, and the priest was moved away. He believes the priest is now dead. Like most victims of sex abuse in the church, particularly before the church abuse scandals of the 2000s, Martinez didn’t seek legal recourse. Now it would be too late because of statutes of limitations.

For decades, Martinez buried the abuse inside him, only speaking about it to his two wives.

“For me, sexual relationships were marked in me as something forbidden. So it’s been very difficult for me to go through it, and I had to find very patient partners,” he said.

The play shows how the abuse affected his emotional and sexual life as an adult, making him sometimes grow aggressive or overreact to everyday worries — but also how it led him to be very protective towards children.

Martinez said he spent 40 years “wearing the mask of someone else” and “seeking to hide something that was like a cancer inside me.”

A few years ago, he felt he needed to speak out because he was fed up with keeping the trauma inside him.

“I thought: I need to do something. It’s not possible to continue like that,” he said.

The play was shown for the first time at the Avignon arts festival in 2019. That is also when he first told his two sons, now 21 and 11, about the abuse. Since then, Martinez’s play has been playing in theaters in Paris and across France and a performance of it was shown on France’s Catholic television network KTO.

In recent weeks, Martinez, who lost his faith following the abuse, made a new, decisive step. After much hesitation, he asked the head of the Conference of Bishops of France, Eric de Moulins-Beaufort, whether he could seek Martinez’ forgiveness in the name of his abuser.

“He accepted and it was tremendous emotionally for everybody that night,” Martinez remembers. “I gave my forgiveness to the priest that raped me.”

After that, “I felt really completely free of the whole burden of anger, of the desire of revenge. All the bad feelings I had just had vanished, just because I had forgiven,” he said.

“Little by little the trauma is disappearing,” Martinez added. “What helped more was to be able to forgive the priest.”

The actor had been previously in touch with Moulins-Beaufort, who supported the play and offered to show it to French bishops as part of the church’s efforts to face up to shameful secrets that were long covered up.

The offer is evidence of the Catholic hierarchy’s belated realisation that listening to survivors is a fundamental part of the church’s own process of coming to terms with the problem and helping them heal.

Pope Francis came to that realisation at a 2019 summit he convened with the heads of all the world’s bishops conferences, which featured wrenching testimonies from victims about abuse and the lifelong trauma it caused. For many bishops, it was the first time they had ever actually listened to a survivor, since so often the church ignored victims or treated them as an enemy out to harm the institution.

Among many recommendations in last week’s report about church abuse in France are measures that would institutionalise ways for church hierarchy to better help and hear victims. The report estimates that at least 2,900-3,200 male clergy members were responsible for sexual abuse of children in France since the 1950s, and accuses the church of a systemic coverup.

Martinez knows that his play is helping other people who suffered similar ordeals, and hopes it encourages them to speak out and seek help.

Some “come to see me and say: ‘Thank you so much, because, you know, this is also my story. And you are the first person I’m telling that to.’”

“The most difficult thing is to say it once,” Martinez stressed. “Then you get the strength to say it again and again and again. And then you’re free, or at least you are on the good path to freedom.”