Power, water, heat knocked out in swaths of country 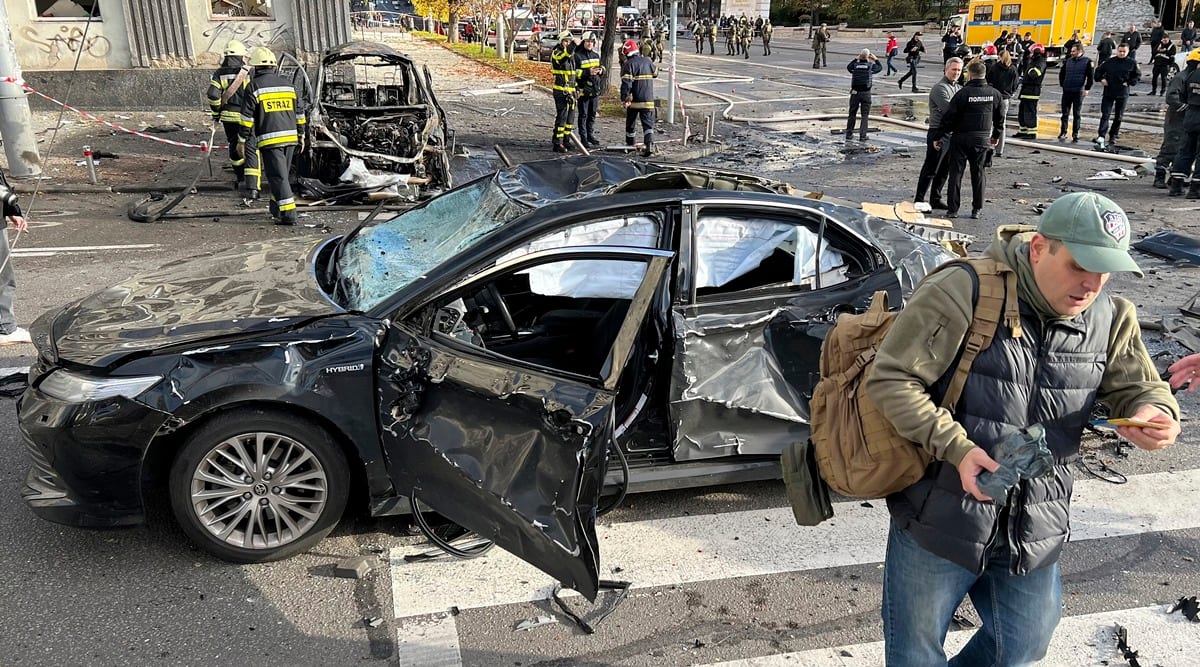 Rescue workers survey the scene of a Russian attack on Kyiv, Ukraine on Monday (AP photo)

Russia launched its most widespread air strikes since the start of the Ukraine war on Monday, raining cruise missiles on busy cities during rush hour and knocking out power and heat, in what President Vladimir Putin called revenge for a blown up bridge.

Missiles tore into busy intersections, parks and tourist sites in the centre of the capital Kyiv.

Explosions were reported in Lviv, Ternopil and Zhytomyr in western Ukraine, Dnipro and Kremenchuk in central Ukraine, Zaporizhzhia in the south and Kharkiv in the east. Ukrainian officials said at least 10 people were killed and scores injured, and swathes of the country left without power.

The aftermath of multiple strikes in Ukraine’s Kyiv today.

Thousands of residents raced to bomb shelters as air raid sirens rang out through the day. The barrage of dozens of cruise missiles fired from air, land and sea was the biggest wave of air strikes to hit locations away from the front line, at least since the initial volleys on the war’s first day, Feb. 24.

“The Kyiv regime, with its actions, has put itself on the same level as international terrorist organisations. With the most odious groups. To leave such acts without a response is simply impossible,” Putin said in a televised address.

The Russian leader said he had ordered “massive” long range strikes and he threatened more strikes in future if Ukraine hits Russian territory.

Ukrainian President Volodymyr Zelenskiy said the attacks were deliberately timed to kill people, as well as to knock out Ukraine’s power grid. His prime minister said 11 major infrastructure targets were hit in eight regions, leaving swaths of the country with no electricity, water or heat.

“They are trying to destroy us and wipe us off the face of the earth,” Zelenskiy said.

The body of a man in jeans lay in a street at a major Kyiv intersection, surrounded by flaming cars. In a park, a soldier cut through the clothes of a woman who lay in the grass to try to treat her wounds. Two other women were bleeding nearby.

‘THEY ARE TRYING TO DESTROY US’

The Kremlin was humiliated two days ago when a blast damaged Europe’s longest bridge, which it had built after it seized and annexed Ukraine’s Crimea peninsula in 2014. Ukraine, which views the bridge as a military target sustaining Russia’s war effort, celebrated the blast without officially claiming responsibility.

People work to remove debris from a damaged house after an overnight Russian shelling, in Sloviansk, Donetsk region, Ukraine. (AP)

With troops suffering weeks of setbacks on the battlefield, Russian authorities have been facing the first sustained public criticism at home of the war, with commentators on state television demanding ever tougher measures.

Ben Hodges, a former commander of U.S. army forces in Europe, said the scale of the strikes suggested Russia’s plan to escalate may have been drawn up before the bridge was attacked.

Monday’s strikes tore a huge crater next to a children’s playground in one of central Kyiv’s busiest parks. The remains of an apparent missile were buried, smoking in the mud.

More volleys of missiles struck the capital again later in the morning. Pedestrians huddled for shelter at the entrance of Metro stations and inside parking garages.

Firefighters and police officers work on a site where an explosion created a crater on the street after a Russian attack in Dnipro, Ukraine, Monday, Oct. 10. (AP)

Germany said a building housing its consulate in Kyiv had been hit in Monday’s strike, though it had not been used since the war started on Feb. 24. The European Union condemned Monday’s “barbaric and cowardly attacks” on Ukraine, among a chorus of denunciations from Western countries.

Security camera footage showed shrapnel and flames engulfing a glass-bottomed footbridge across a wooded valley in the city centre, one of Kyiv’s most popular tourist sites. One pedestrian could be seen running from the blast. Reuters later saw a huge crater below the bridge, damaged but still standing.

Zelenskiy filmed a video message on a mobile phone on an empty central Kyiv street. He said the strikes had two main targets: energy infrastructure and people.

“Such a time and such targets were specially chosen to cause as much damage as possible,” he said.

Olena Somyk, 41, sheltered with her 6-year-old daughter, Daria, in an underground garage where hundreds of other people waited for the all-clear. She had reached Kyiv earlier in the war after fleeing through Russia and across Europe from the Russian-occupied southern city of Kherson.

“Really, I think they did this because they are bastards,” said Somyk. Putin, she said, “is a small angry man, so we don’t know what more to expect”.

In another sign of possible escalation, Putin’s closest ally, President Alexander Lukashenko of Belarus, said on Monday he had ordered troops to deploy jointly with Russian forces near Ukraine, which he accused of planning attacks on Belarus with its Western backers.

“Their owners are pushing them to start a war against Belarus to drag us there,” he said, citing no evidence. Lukashenko allowed Belarus to be used as a staging ground for Russia early in the war but has not sent his troops to fight.

Within Russia, the strikes were cheered by hawks. Ramzan Kadyrov, the staunchly pro-Kremlin leader of Russia’s Chechnya region who had demanded in recent days that military commanders be sacked, hailed Monday’s attacks: “Now I am 100% satisfied with how the special military operation is being conducted.”

“We warned you Zelensky, that Russia hasn’t even got started yet, so stop complaining … and run! Run away without looking back to the West,” he wrote.

Russia has faced major setbacks on the battlefield since the start of September, with Ukrainian forces bursting through front lines and recapturing territory. Putin responded to the losses by ordering a mobilisation of hundreds of thousands of reservists, proclaiming the annexation of occupied territory and threatening repeatedly to use nuclear weapons.