Terror-hit Paris store picks up the pieces off the shelf

The grocery shop of Paris where the shoppers were cornered by Amedy Coulibaly, reopened on March 5. 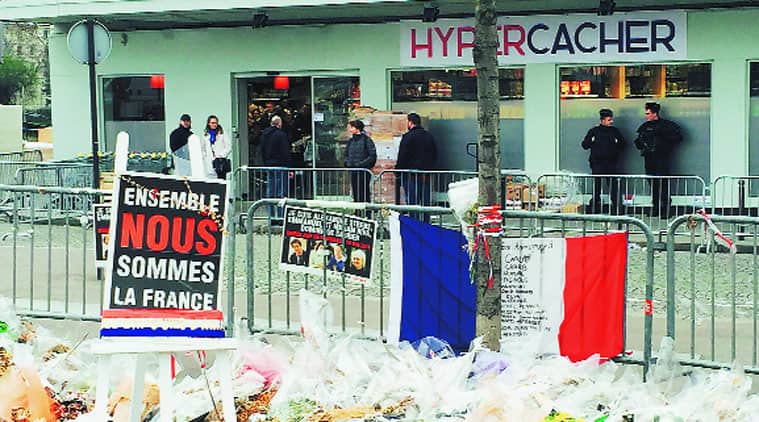 Hypercacher, the grocery shop of Paris where the shoppers were cornered by Amedy Coulibaly, reopened on Sunday amid tributes and quiet defiance.

Tins of tuna, bottles of sunflower oil, blocks of cheese and sparkling water are back on the frontline of Paris’s fight against terrorism.

Burger patties, sausages and rolls of salami are back again on the shelves of a shop, where four Jews were murdered in cold blood, to stem the rising tide of anti-Semitism in France.

Hypercacher, the grocery shop on the eastern periphery of Paris where the shoppers were cornered by Amedy Coulibaly and shot dead, reopened on Sunday amid tributes and quiet defiance. Coulibaly, 32, owed allegiance to ISIS and synchronised his attack with the mass killing of cartoonists at the Charlie Hebdo magazine two days earlier on January 7.

The jihadi of African descent is dead and so are his friends who chose and shot the cartoonists. But their legacy of fear and distrust is very much alive, hiding behind the city’s broad shoulder of fraternity.

Inside the kosher (Jewish equivalent of halal) food shop, tills are ringing without a pause. Queues of chatty people, Muslims too, wait to pay. Shop workers, many of African origin, are busy putting frantic use to their box cutters. Cold meats are selling like hot cakes. TV cameras and microphones are recording such acts of bravery as buying frozen chicken.

All good here since morning? “Yes, of course. What could be wrong?” says the worker, refusing to give his name. Asked if he is scared of working here, he says no. “If people like you are not, so why should I be. I am making a living here.”

He says all the staff members are new as the old ones did not return.

Just outside is a Jewish man in black, hat and all, and tellingly named Israel, distributing religious pamphlets. He says Lassana Bathily, the Muslim hero from Mali who saved lives at the shop in the bloody stand-off, is back home.

\”Some of us (Jews) will also like to leave but for most, France is the home country. There is a difference in going to Israel and being driven out of here. The people of Paris want us to stay and we will,” says Israel.

Fabrice, with his little son strapped to his chest, stands in the middle of piles of flower, dry and lush, at the shop’s entrance. He is not sure most will stay or should. “Grocery shopping can be dull or enjoyable but should it be ever so dangerous? Look at the gun-ready policemen there. I thought, ‘how can I walk in there with my child?’ But I did. I bought a souvenir.”

Fabrice, a “secular” Jew who is the sixth generation in France, said he recently went to his grandmother’s wake in a synagogue. “Eight Army men were guarding the entrance. I thought, ‘are even the dead safe here?’ The living certainly aren’t,” said the father of two.

For Robert Ejnes, who heads the Council of Jewish Institutions of France, the reopening of the supermarket is proof of how Jews want to live in France and lead a normal life. “The burden of memories old and new is heavy on us but we know the art of just going on living as if nothing happened. It’s not fatalism, it’s resilience and also a faith in the French state to do its best for threatened minorities,” Ejnes said. “The Jews are not fleeing France out of fear.”

Noted conflict journalist and writer Olivier Weber, who has written books on the Afghan Taliban and on Iraq, says he understands why a food shop will become a place of murder.

”Radical elements choose icons to attack. In this sense, what happened to the Bamiyan Buddha in 2001 or at Charlie Hebdo are similar. People were killed in Paris not because of what France did but because of the violent power struggle in many Muslim countries,” said Weber, who lost cartoonist and friend Georges Wolinski at Charlie Hebdo.

But amid the defiance and busy normalcy, is Paris still scared? Weber says yes, it is. “Places such as Eiffel Tower are not an issue but an attack on a train station is feared the most. The headstrong French society is in a cycle where more free speech will anger more radical Muslims, who will then try to silence the supposed blasphemy, causing even more pressure for greater freedom to offend,” he said.
Community leader Ejnes said, “Contrary to the fashionable opinion, the French Muslim is well-integrated and doesn’t share the radical cause. The violence in Europe is an import.”

Anouar Kbibech, who will be president of France’s top representative Muslim body CMCF in June, said if there is disquiet among Jews, there is also unease and fear among Muslims. “Anti-semitism and Islamophobia are from the same origin and France has to reject both. The French Muslim will not become a tool in a fight whose idea they disown.”

Malek Chebel, a scholar of Islam who has translated the Quran in French and written a book called ‘Dictionary of Love in Islam’, also rejected the theory that the French Muslim is a social problem. “Muslims here consider radicalism as anti-Islam and anti-France. They want to breathe the same free air that a Jew or a native French person does.”

Asked if France was living in fear and whether he feared for his own safety, given he has received terror threats in the past, Chebel said, “The French don’t like being afraid, nor do I. They have said no to too much security and I have also rejected police protection.”

Standing at the bustling Montparnasse train station, under Paris’s tallest tower and imminent threat, 42-year-old Agathe waits for her boyfriend to arrive. Is she afraid? “No I am not. I am a Parisian, where will I go from here?” she asked. But she quickly added that people in others cities in France don’t want to visit Paris “out of fear and a sense that the city’s worries are of its own making”.

She said the Muslims of Paris are themselves not a problem but they attract trouble, echoing Weber’s idea that the city is in fact a new theatre in the Middle East’s war with itself.

But what must the Jew do to not come in between? Back at the Hyper Cacher, Fabrice the Jewish Parisian said, “My grandmother was from East Europe. My mother came from North Africa. When my sons where born, I thought the chronic displacement had stopped. But a Jew has no home. They must live between others’ ideas of how ‘their’ world must be.”