A separatist leader said this process would begin later on Saturday, though the Ukrainian side said details were still being worked out. 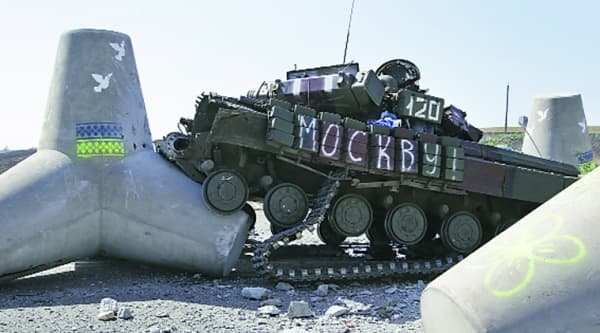 A destroyed Ukrainian army tank near the village of Lebedynske, on the highway joining Mariupol and Novoazovsk Saturday. (Source: AP)

An uneasy calm prevailed in eastern Ukraine on Saturday after Ukrainian forces and pro-Russian separatists signed a ceasefire as part of a drive to end a war that has triggered a deep crisis in relations between Russia and the West.

The peace roadmap, approved by envoys in Minsk on Friday, includes the exchange of prisoners-of-war. A separatist leader said this process would begin later on Saturday, though the Ukrainian side said details were still being worked out.

The two sides remain far apart on the future status of the rebel-held areas in eastern Ukraine and both residents and combatants said they did not expect the ceasefire to last long, but there were no reports of serious violations on Saturday.

“The forces of the anti-terrorist operation support the ceasefire and are closely observing the order of the commander-in-chief,” the spokesman for Ukraine’s National Security and Defence Council, Andriy Lysenko, told a daily briefing in Kiev.

In rebel-held Donetsk, the region’s industrial hub with a pre-war population of about one million, separatist commanders said they did not believe the five-month war was over.

“The ceasefire is looking good for now but we know they (the Ukrainian side) are only using it to bring in more forces here and ammunition and then to hit us with renewed strength,” said one rebel commander known by his nickname Montana. “Come what may, I would not trust (Ukraine’s President Petro) Poroshenko. And it’s not him making the call anyway but the Americans and that is even worse.”

Poroshenko agreed to the ceasefire after Ukraine accused Russia of sending troops and arms onto its territory in support of the separatists, who suffered big losses over the summer. Moscow denies sending troops or arming rebels.

The European Union announced new economic sanctions against Russia late on Friday over its role in Ukraine but said they could be suspended if Moscow withdraws its troops and observes the conditions of the ceasefire.

Russia’s foreign ministry responded angrily on Saturday to the measures, pledging unspecified “reaction” if they were implemented. Moscow responded to a previous round of US and EU sanctions by banning most Western food imports.

President Putin has fallen under the spell of Satan and faces eternal damnation unless he repents, a top Ukrainian clergyman said Saturday in an unusually blunt statement. Patriarch Filaret heads the Kiev Patriarchate, a branch of the Orthodox Church that broke away from Moscow in 1992.

“With great regret I must now say publicly that among the rulers of this world … there has appeared a new Cain, not by name but by deeds,” Patriarch Filaret said, invoking the Biblical character who killed his brother Abel.  PTI