Europe feels overwhelmed and needs to be far more rigorous in sending economic migrants back if it wants to find enough goodwill among its population to continue harboring true refugees. 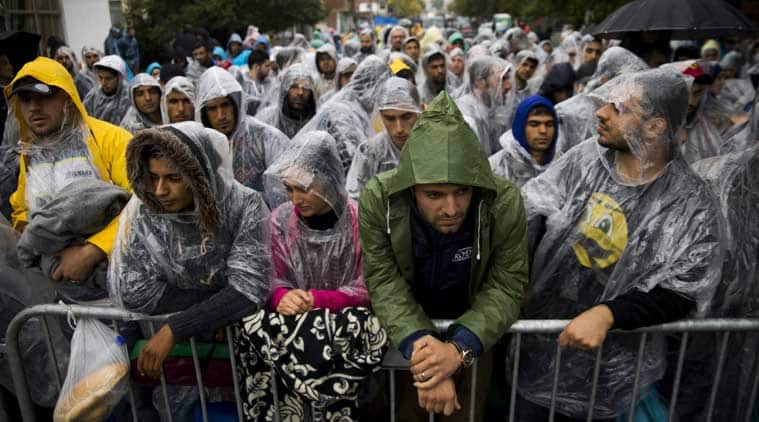 Migrants wait to be registered at the registration camp in Presevo, Southern Serbia. (Source: AP)

The European Union on Thursday took measures to buttress its porous external borders and toughen up its migrant return program in an attempt to build a credible refugee policy that would continue to embrace those fleeing for their lives yet punish those seeking economic gain.

Facing their toughest refugee emergency since World War II, the 28 EU nations committed to speed up and intensify the deportation of people who do not qualify for asylum, including more special flights out and detention for those who might slip into illegal residence.

It all was to underscore one key message: Europe feels overwhelmed and needs to be far more rigorous in sending economic migrants back if it wants to find enough goodwill among its population to continue harboring true refugees.

“Increased return rates should act as a deterrent to irregular migration,” the conclusions of the meeting said.

More than 500,000 people have arrived this year seeking sanctuary or jobs. But of the people who fail to obtain asylum or residency in the 28-nation EU, less than 40 percent actually go back, and all agree that should change quickly.

“If there is no return policy there is no basis for the refugee policy,” said French Interior Minister Bernard Cazeneuve, adding agreements should be quickly made with many of the developing nations from where tens of thousands of economic migrants leave in desperation for a better life in Europe.

At the same time, he put to the EU nations a far-reaching plan to beef up the external borders by committing member states to contribute more personnel to the EU’s border agency and eventually set up a largely autonomous international “corps” that could intervene wherever a crisis appears.

French officials said that in the short term, member states would be obliged to contribute more personnel to the Frontex border agency based on their population, wealth and other criteria.

Last week, Frontex appealed for 775 additional staff to deal with the migrant crisis in Greece and Italy. It would roughly double the staff the agency has there now, mainly on some 30 vessels in the Mediterranean.

In the long term, France proposes a multinational European border guard corps which would have much more autonomy to act and contain crises.

To further deal with the mass movement of migrants through the Balkans, EU ministers discussed better cooperation with their counterparts from the region and the nations bordering Syria, from where many refugees have fled the war.

Several ministers lauded a better understanding at the meeting between Balkan nations, which have often fought over who should take charge of the refugees transiting through their countries.

“That is much more efficient than throwing the problems at one another,” said Dutch Foreign Minister Bert Koenders. “It is a complex humanitarian crisis demanding concrete cooperation.”

On Thursday, the EU also earmarked more than 400 million euros ($451 million) in additional funding to tackle the refugee emergency.

Most of the money — 300 million euros — will be used to help Syrian refugees in countries outside the EU, including Turkey, Lebanon and Jordan.

It will also fund the creation of 120 jobs in the three key European agencies working on the migration frontline; Frontex, the EASO asylum support office and the policy agency Europol.

Some 56 million euros will be devoted to humanitarian aid.

US hero who thwarted French train attack stabbed in brawl