Warren was referring to the November 6 election, when Democrats hope to regain control of the House, which would put them in position to examine and possibly publicly release Trump's returns. 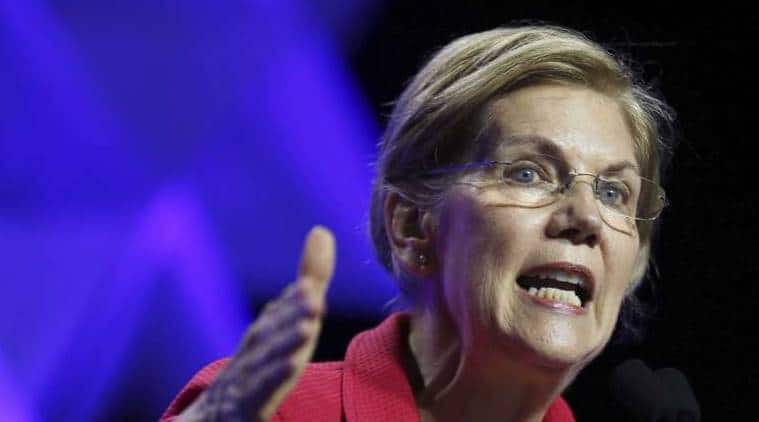 Warren tweeted that Trump is a “cowardly elitist” and she “won’t sit quietly for Trump’s racism” so she took the test. (AP photo)

Sen Elizabeth Warren is suggesting President Donald Trump’s comment about him personally administering a DNA test to her to prove her Native American heritage is “creepy.”

She tweeted Monday that the president makes “creepy physical threats” about women who scare him, including her.

He is trying to do what he always does to women who scare him: call us names, attack us personally, shrink us down to feel better about himself,” the Massachusetts Democrat responded on Twitter after Trump made the comment during an appearance in Georgia. “It may soothe his ego – but it won’t work.”

Warren, who is seen as a potential 2020 challenger to Trump, appears to have taken a page out of his political playbook, striking back almost instantly at the president who continues to ridicule her claim of Native American ancestry. Trump relishes a good fight, those close to him have said and will hit back twice as hard when he’s been attacked.

A sharp critic of Trump, Warren wasted little time going after him on Monday.

She opened the day by releasing DNA test results that provide some evidence of a Native American in her lineage, though the ancestor probably lived six to 10 generations ago, according to the analysis. Trump has ridiculed her as “Pocahontas” over the ancestry claim.

In July, the president offered to donate $1 million to her favourite charity if a DNA test proved her Native American bloodline.

On Monday, he first denied ever making such a promise, then said later that “I’ll only do it if I can test her personally.”

“That will not be something I enjoy doing either,” he added.

Warren tweeted that Trump is a “cowardly elitist” and she “won’t sit quietly for Trump’s racism” so she took the test.

“I took this test and released the results for anyone who cares to see because I’ve got nothing to hide. What are YOU hiding, (at)realDonaldTrump?” she wrote. “Release your tax returns – or the Democratic-led House will do it for you soon enough. Tick-tock, Mr President.”

Warren was referring to the Nov. 6 election, when Democrats hope to regain control of the House, which would put them in position to examine and possibly publicly release Trump’s returns.

Trump has bucked decades of precedent by refusing to release his income tax returns during the 2016 presidential election, as well as after taking office.

When can babies start having walnuts, almonds and other nuts?