‘Ebola could have wiped us all’: slow lockdown haunts Uganda

Officials in Uganda, a landlocked nation in East Africa, now acknowledge that they hesitated to impose similar restrictions in the recent Ebola outbreak because of the lingering anger, resentment and trauma over the strict COVID-19 measures 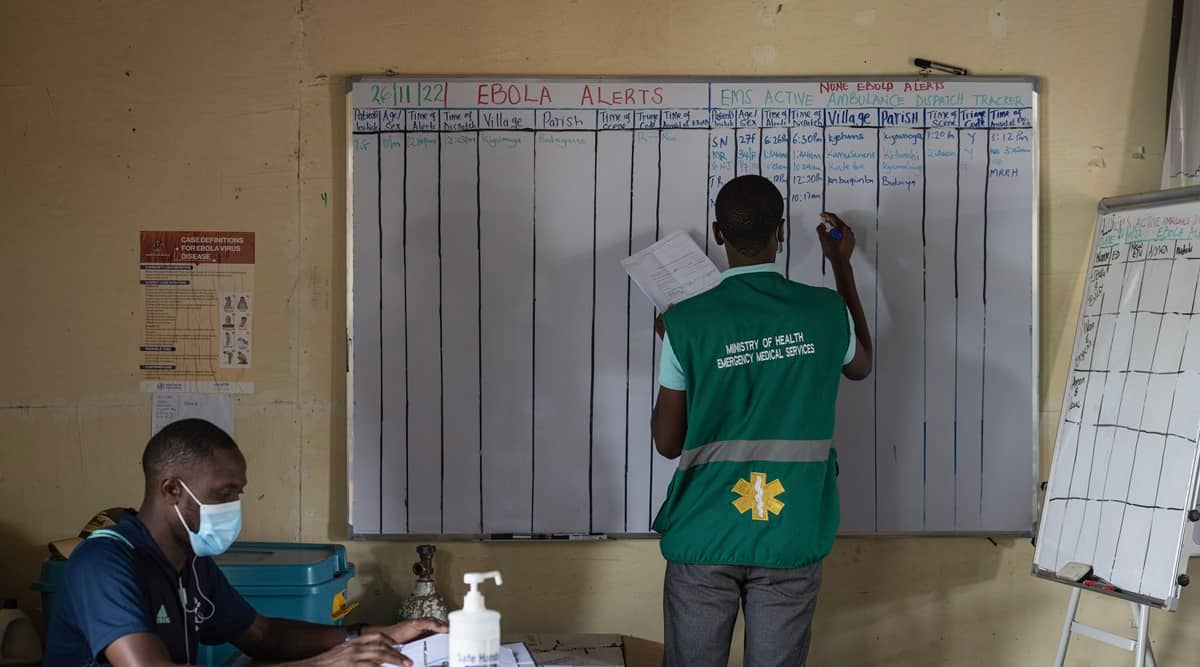 The Kassanda District Ebola Command Center, where daily monitoring, contact tracing, alerts and case management of the virus are being handled, in Kassanda, Uganda, November 2022. The authorities hesitated to impose restrictions in the epicenter of the Ebola outbreak because of residual trauma from the COVID lockdown. (Esther Ruth Mbabazi/The New York Times)

As an outbreak of Ebola swept through central Uganda in late September, government officials were willing to do anything to contain the virus except take one crucial step: impose a lockdown.

This was radically different from their response during the onset of the coronavirus pandemic, when Uganda introduced some of the most restrictive shutdowns in Africa by closing borders, banning public transportation and shutting schools for two years — one of the longest such shutdowns worldwide.

Officials in Uganda, a landlocked nation in East Africa, now acknowledge that they hesitated to impose similar restrictions in the recent Ebola outbreak because of the lingering anger, resentment and trauma over the strict COVID-19 measures. They worried that another harsh response to an epidemic could spark protests, batter an economy already under strain and alienate a weary population inundated with misinformation about the dangers — and even the existence — of the Ebola virus.

The initial decision not to seal off the epicenter of the Ebola outbreak has come to haunt Uganda. The disease spread to nine districts, including the capital, Kampala. The World Health Organization reported 142 confirmed cases and 55 confirmed deaths, with an additional 22 deaths probably linked to the outbreak.

Ssekiranda Fred, second from left, and his three remaining children at the grave of his 12-year-old son, Ssebiranda Isaiah Victor, who contracted Ebola in Kampala, the capital of Uganda, October 2022. (Esther Ruth Mbabazi/The New York Times)

“We should have done it in a much more aggressive way,” said Henry Kyobe Bosa, a public health researcher who is managing the Ebola response at the Ministry of Health. But he added, “Remember, we are coming from COVID, and you want not to disrupt people’s lives as much as possible.”

The outbreak, the country’s deadliest in more than two decades, has now largely subsided, and no new Ebola infections have been reported recently. But those who were affected are asking whether all the pain could have been avoided.

Among those who died was 12-year-old Ssebiranda Isaiah Victor, whose relatives gathered on a recent overcast afternoon for a memorial service at Nakaziba, their village in the lush hills of central Uganda.

The family lived in Kampala, and the boy’s father, Ssekiranda Fred, said his son had contracted the virus from a neighbor’s child who arrived from Kassanda, one of the districts in the center of the outbreak.

Fred said that if the government had taken strict measures to curb the virus, “maybe things wouldn’t have turned out the way they turned out.”

Ebola, a highly contagious disease mostly seen in Africa, causes fever, fatigue, and bleeding from the eyes and the nose. The virus kills about half of those it infects. The largest number of deaths, 11,325 people, was recorded during an outbreak in West Africa from 2014-16. An epidemic in Congo in 2018-20 killed 2,280 people.

In recent years, Uganda has suffered through multiple disease outbreaks, including measles, Marburg and polio, that have burdened its health system.

So when COVID-19 hit, authorities introduced sweeping restrictions, which had devastating effects on the country’s 47 million people. Rights groups and opposition members argued that the measures were part of an effort to suppress dissent before closely contested elections last year and the bloody months that followed.

Ugandan health officials said they were reluctant to issue another blanket lockdown when the Ebola virus was detected, despite recommendations from medical experts and aid groups that urged them to swiftly prevent movement to and from areas where cases appeared.

“This is a public health emergency of international concern, and the government kind of fell behind,” said a senior aid official involved in the emergency Ebola response and who, like others, spoke on the condition of anonymity to discuss sensitive matters. “They wanted to give the general impression that the outbreak is under control.”

Finally, on Oct. 15, almost a month after the first Ebola case was reported, President Yoweri Museveni announced a dusk-to-dawn curfew and the restriction of movement in and out of Mubende and Kassanda, the districts where the outbreak was concentrated.

By then, the virus had spread to the capital. People who had contact with Ebola patients from Mubende were evading quarantine. Museveni said in a speech that one contact concealed his identity and address to seek treatment from a traditional healer in a neighboring district. He later died in Kampala.

“They were really determined on no more lockdowns because they knew that public trust was not there,” said another senior Western health official with knowledge of the emergency response. But with the virus in Kampala, the official said, “they felt pushed into it.”

By then, the United States had issued an order to screen all travelers from Uganda arriving at American airports. Many tourists were also postponing or canceling their trips to Uganda, threatening a tourism industry that was betting on the upcoming holiday season to recover from the staggering losses of the pandemic, said Herbert Byaruhanga, president of the Uganda Tourism Association and the manager of a bird-watching company.

“It is like adding salt to the wound,” said Byaruhanga.

The Ugandan public’s lack of trust in the government’s Ebola response created fertile ground for misconceptions, including the belief that Ebola is caused by witchcraft and that the burials of Ebola victims are kept closed — not to prevent contagion but so that their organs can be harvested and sold.

At a motorcycle taxi stop in Kassanda, almost a dozen people congregated on a recent evening to insist to reporters that Ebola did not exist. The lockdown, they said, was meant to punish the district for backing the opposition party led by musician-turned-politician Bobi Wine in the 2021 elections. They also accused the police of beating them to enforce the overnight curfew.

“Where is Ebola?” asked Mutumba Alex, a taxi driver. Waving his driver’s license, he said he knew the area well and did not see any proof of sickness or deaths from the disease. “Ebola does not exist.”

But the reality in Kassanda was different for Nantale Rashida, who said she faced stigma and discrimination from her neighbors when her husband, Asadu Matovu, tested positive for Ebola. Matovu recovered but lost his mother and two brothers to the virus.

To prevent Rashida and her their children from going anywhere, the community “tied ropes around our plot,” she said. “I spent all day and night crying.”

Multiple corruption cases related to the coronavirus pandemic have also eroded citizens’ trust in their leaders.

The United States, which has donated more than $22 million to fight Ebola, has been concerned about corruption, too, said Natalie Brown, U.S. ambassador to Uganda. The vast majority of donations from the United States and other donors have gone through aid agencies rather than directly to the Health Ministry — a move that has incensed Ugandan officials, according to interviews with aid officials.

Corruption even struck at Ebola patients. A report prepared by health officials in Kassanda and seen by The New York Times noted that survivors of Ebola complained that the police had impounded their possessions and demanded bribes to release them.

Vaccines exist to prevent Ebola, but there is no approved vaccine or drug treatment for the Sudan strain of the virus, which caused the recent outbreak in Uganda. A clinical trial of three vaccines — made by the Washington-based Sabin Vaccine Institute, the University of Oxford and the American pharmaceutical company Merck — is being prepared. Researchers have also begun a clinical trial of two monoclonal antibodies donated by the United States that can help boost patients’ chances of survival.

Some experts say, however, that with no new Ebola cases being reported in Uganda now, a critical opportunity to advance understanding of the Sudan Ebola strain might have been missed.

For now, families across Uganda are grieving for their loved ones.

Days after he lost his son to Ebola in mid-October, Fred’s wife of 22 years, Nakku Martha, succumbed to the virus. Fred was in isolation when both died, and he was unable to attend either of the burials. Even as he mourned, he said, he remained grateful that the virus did not take his three remaining sons.

“Ebola could have wiped us all,” he said, teary-eyed on a recent afternoon, as he walked around the tiled grave of his son, canopied by banana trees. “But we survived and remain hopeful.”

How studying abroad is likely to shape up in 2023