Authoritarian regimes in Moscow and Tehran have in common international isolation, domestic crisis and conflict with the West. 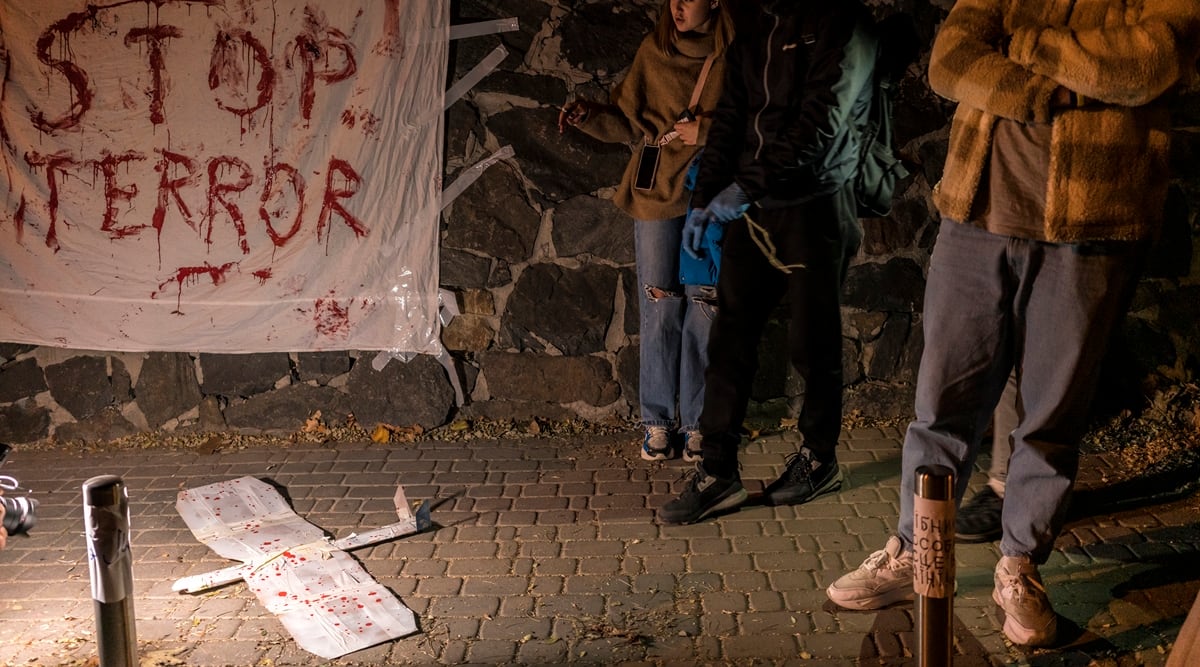 The Iranian-made drones that Russia sent Monday to divebomb Ukraine’s capital delivered the most emphatic proof yet that Tehran has become a rare, increasingly close ally to the Kremlin, offering both weapons and international support that Russia sorely lacks.

There is no deep love between Russia, newly a pariah for attacking another country, and Iran, for decades one of the most strategically isolated nations in the world. But the two authoritarian governments, both chafing under Western sanctions, share a view of the United States as their great enemy and a threat to their grip on power.

“This is a partnership of convenience between two embattled dictatorships,” said Karim Sadjadpour, an Iran expert at the Washington-based Carnegie Endowment for International Peace.

Both countries are deep in crisis, struggling economically and politically. Iran is attempting to quell street protests that pose the most serious challenge in years to the government, while Russia is trying to manage rising dissension over a faltering war effort and an unpopular draft.

Local residents look at parts of an unmanned aerial vehicle (UAV), what Ukrainian authorities consider to be an Iranian-made drone Shahed-136, after Russian drone strike, amid Russia’s attack on Ukraine, in Kyiv, Ukraine October 17, 2022. (Reuters)

The emergence of a Moscow-Tehran alliance has multiple international implications, potentially dimming prospects for a new agreement to rein in Iran’s nuclear program and raising the pressure on Israel, Iran’s sworn enemy, to take Ukraine’s side in the war.

The relationship between Russia and Iran has been developing for years. Russian President Vladimir Putin deployed his air force to Syria starting in 2015 to prevent the collapse of the regime of President Bashar Assad, a longtime ally of Tehran. Russia and Iran worked in lock step militarily, with Russian warplanes providing cover for Iranian militiamen and Iranian proxy forces fighting on the ground.

Advertisement
Explained |What are the Iranian kamikaze drones, allegedly deployed by Russia in Ukraine?

Syria was one example of the effort by both to find ways to sap American strength and prestige wherever they could in the world, and Ukraine provides a similar opportunity on an even larger, more visible scale.

After its 1979 revolution, Iran formulated foreign policy around the slogan “Neither East Nor West,” equally wary of the Soviet Union and the United States. Now, the Islamic Republic is choosing sides, analysts said, and images of Iran’s exploding drones accurately hitting their targets advertise it as a regional power to be taken seriously.

In Tehran, the spokesperson for the Iranian foreign ministry denied Monday that his country was selling weapons to Russia, even as social media outlets linked to Iran’s Revolutionary Guard, which developed the lumbering yet lethal drones, boasted about them.

“There is no doubt that the drones used by Russia’s military are Iranian,” said a post on Sepah Cyberi, a Telegram channel affiliated with the Guard, while the country’s cyberarmy chief, Ali Akbar Raefipour, gloated on Twitter that Iran’s Shahed drone was now “the most talked about weapon in the world.”

Iran does not want to highlight the weapons sales because Ukraine is generally more popular than Russia among ordinary Iranians, and the Islamic Republic casts itself as a defender of underdogs in world affairs, said Mahmoud Shoori, deputy director of the Institute of Iran and Eurasia Studies in Tehran and an expert on Iran-Russia relations.

But at the same time, “Iran also wants to show the world that it has a military superpower as an ally and it has the capacity to sell weapons to such a power,” he said in a telephone interview. “It shows the West’s policies of maximum pressure to isolate Iran have not worked.”

Aside from weapons, the two have found some common ground on energy, oil and gas. Russia has worked on Iran’s Bushehr Nuclear Power Plant for decades, but extensive delays and multibillion-dollar cost overruns have turned it into a sore point in relations.

Russian forces have run low on precision-guided ballistic and cruise missiles, Western analysts say, and as a result, the war has reversed the usual pattern of major powers’ selling arms to smaller ones. Unable to buy weapons elsewhere — except, perhaps, from North Korea — Moscow has turned to Iran.

The drones carry smaller payloads and are much slower than such missiles, making them far easier to shoot down. But they are also much cheaper, so Russia can launch them in bunches, overwhelming air defenses and allowing some to reach their targets.

Russia is unleashing successive waves of the Iranian-made Shahed drones over Ukraine. (AP)

“They can be used by Russia to target electricity, fuel, etc., and to attempt to economically exhaust Ukraine over time,” said Michael Kofman, director of Russia studies at CNA, a defense research institute in Arlington, Virginia.

Iran or its proxies have been accused of using drones for attacks on adversaries in its own region, such as Saudi Arabia.

For Iran, Russian use of its drones sends a message to its domestic audience, including those who have been protesting against restrictions on women’s rights and personal freedom for weeks.

The government is trying to show Iranians that it is “not in a position of weakness, and has not been cowed by external pressure and threats,” said Ali Vaez, the Iran project director for the International Crisis Group, an independent research institute.

The Washington Post reported Sunday that Iran would also sell short-range ballistic missiles to Russia, weapons far more deadly than the drones. Analysts used to laugh off Iranian missiles as cheap knockoffs of Soviet or North Korean weapons, but no longer.

In recent years, Iran has made “lots of advances and has really improved their targeting ability,” said Afshon Ostovar, an associate professor of Middle Eastern politics at the Naval Postgraduate School in Monterey, California.

Police officers shoot at a drone during a Russian drone strike, which local authorities consider to be Iranian-made Shahed-136 unmanned aerial vehicles (UAVs), amid Russia’s attack on Ukraine, in Kyiv, Ukraine October 17, 2022. (Reuters)

It is not clear how Saudi Arabia, Iran’s primary regional adversary, will react to the Kremlin’s drawing closer to Tehran. The Saudi government and Moscow have joined forces recently in trying to raise oil prices, irking Washington and fueling inflation.

In Israel on Sunday, a cabinet minister, Nachman Shai, said on social media that Iran’s military assistance to Russia removed “any doubt where Israel should stand in this bloody conflict. The time has come for Ukraine to receive military aid, as well, just as the USA and NATO countries provide.”

Since the start of the war in February, Israel has not provided Ukraine with arms despite frequent Ukrainian requests for air-defense systems, and has been wary of criticizing Russia too strongly. Russia has given Israel a relatively free hand to strike Iranian targets in Syria, and the Israelis are also concerned about the Kremlin’s obstructing Jewish emigration.

In a sign of brewing tensions, Dmitry Medvedev, a former president and now deputy head of Russia’s Security Council, warned on social media Monday against any “reckless” supply of Israeli military aid to Ukraine. “It will destroy all interstate relations between our countries,” wrote Medvedev.

The deepening alliance between Russia and Iran “should be seen as a profound threat and something that any country should pay very close attention to,” Vedant Patel, a deputy spokesperson for the U.S. State Department, said at a Monday news briefing. “We’re in close touch with our allies and partners, including those in the United Nations, to address Iran’s dangerous proliferation of weapons to Russia.”

The European Union is closely monitoring the use of drones, said Josep Borrell Fontelles, its foreign policy chief. The bloc had already been weighing further action against Iran for its violent crackdown against domestic dissent in recent weeks. Ukraine on Monday called for further sanctions.

Activists protest against Iran allegedly supplying drones to Russia in front of the Iranian embassy after a Russian drone strike in the morning, which local authorities consider to be Iranian-made unmanned aerial vehicles (UAVs) Shahed-136, amid Russia’s attack on Ukraine, in Kyiv, Ukraine October 17, 2022. (Reuters)

The drone sales provoked more questions about the prospects for a nuclear deal under which Western sanctions against Iran would be lifted in exchange for Tehran’s greatly reducing its capacity to enrich the uranium needed for nuclear weapons. Then-U.S. President Donald Trump withdrew from the original 2015 pact, which included Russia and other world powers, and President Joe Biden has been keen to negotiate a new one.

The Russians are now seen as perhaps the least enthusiastic about the deal as it would return significant amounts of Iranian oil and gas to the international market, competing with Russia’s own sales and potentially driving down prices. Nor is it clear how willing Iran’s ruling mullahs would be to return to accepting limits on their nuclear program.

Putin made a rare overseas trip in July in order to cement the alliance with Iran as a counterweight to being isolated from the West. Since then, the challenges facing both his and Iran’s governments have grown significantly.

“In their view, the West is either irreconcilably hostile or unreliable,” Vaez said of Iran. “I think in this conflict in Ukraine, they see an opportunity for consolidating the relationship with the East as a way of trying to neutralize the pressure they face from the West, be it economic, military or political.”