A Holocaust denier and unabashed racist, Nick Fuentes openly uses hateful language on his podcast, in recent weeks calling for the military to be sent into Black neighbourhoods and demanding that Jews leave the country. 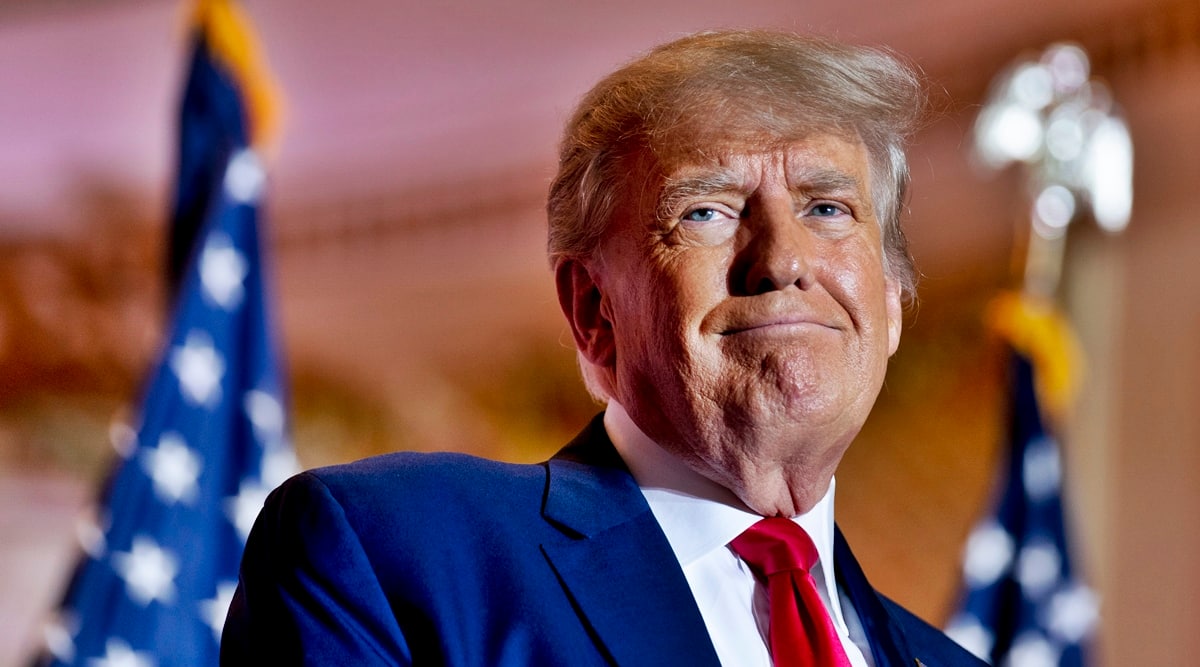 Former US President Donald Trump has announced that he is running for president for the third time. (AP, file)

Former President Donald Trump on Tuesday night had dinner with Nick Fuentes, an outspoken antisemite and racist who is one of the country’s most prominent young white supremacists, at Trump’s private club in Florida, advisers to Trump conceded Friday.

Also at the dinner was performer Ye, who has changed his name from Kanye West and has also been denounced for making antisemitic statements. Ye travelled to meet with Trump at the club, Mar-a-Lago, and brought Fuentes along, the advisers said.

The fourth attendee at the four-person dinner, Karen Giorno — a veteran political operative who worked on Trump’s 2016 campaign as his state director in Florida — also confirmed that Fuentes was there. Attempts to reach Fuentes through an intermediary Friday were unsuccessful.

In recent years, Fuentes, 24, has developed a high profile on the far right and forged ties with such Republican lawmakers as Rep. Marjorie Taylor Greene of Georgia and Rep. Paul Gosar of Arizona, largely through his leadership of an annual white supremacist event called the America First Political Action Conference.

A Holocaust denier and unabashed racist, Fuentes openly uses hateful language on his podcast, in recent weeks calling for the military to be sent into Black neighbourhoods and demanding that Jews leave the country.

It is unclear how much Trump knew of Fuentes’ well-documented bigotry and extremism before their dinner.

Citing people close to Trump, some earlier news coverage of Ye’s visit to Mar-a-Lago had falsely reported that Fuentes did not attend the dinner.

During the dinner, according to a person briefed on what took place, Fuentes described himself as part of Trump’s base of supporters. Trump remarked that his advisers urge him to read speeches using a teleprompter and don’t like when he ad-libs remarks.

Fuentes said Trump’s supporters preferred the ad-libs, at which Trump turned to the others, the person said, and declared that he liked Fuentes, adding: “He gets me.”

In a statement Friday, Trump said: “Kanye West very much wanted to visit Mar-a-Lago. Our dinner meeting was intended to be Kanye and me only, but he arrived with a guest whom I had never met and knew nothing about.” The statement said nothing about Fuentes’ views.

In a post later Friday on his social media website, Truth Social, Trump said that Ye “unexpectedly showed up with three of his friends, whom I knew nothing about.” He said the dinner took place “with many members present on the back patio. The dinner was quick and uneventful. Then they left for the airport.”

Early Friday evening, Trump made a third attempt at defending himself, saying that Ye had sought business advice from him, “expressed no anti-Semitism, & I appreciated all of the nice things he said about me on ‘Tucker Carlson.’ Why wouldn’t I agree to meet? I also, I didn’t know Nick Fuentes.”

Even taking at face value Trump’s protestation that he knew nothing of Fuentes, the apparent ease with which Fuentes arrived at the home of a former president who is under multiple investigations — including one related to keeping classified documents at Mar-a-Lago long after he left office — underscores the undisciplined, uncontrolled nature of Trump’s post-presidency just 10 days into his third campaign for the White House.

While meeting with President Trump at the White House to discuss prison reforms in October 2018, West donned a Make America great Again hat and delivered a 10-minute rambling monologue.(Reuters, file)

A handful of Republicans, including at least one close ally of Trump’s, castigated him over meeting Fuentes and Ye.

“To my friend Donald Trump, you are better than this,” David M. Friedman, who was Trump’s longtime bankruptcy lawyer and then his appointee as ambassador to Israel, wrote on Twitter. “Even a social visit from an antisemite like Kanye West and human scum like Nick Fuentes is unacceptable. I urge you to throw those bums out, disavow them and relegate them to the dustbin of history where they belong.”

I condemned Barak Obama associating with Louis Farrakhan and Jeremiah Wright. This is no different. Antisemites deserve no quarter among American leaders, right or left.

“This is just another example of an awful lack of judgment from Donald Trump, which, combined with his past poor judgments, make him an untenable general election candidate for the Republican Party in 2024,” said Chris Christie, a former governor of New Jersey who is considering a candidacy of his own.

In a statement that did not name Trump but was issued in response to the Fuentes dinner, Matt Brooks, CEO of the Republican Jewish Coalition said, “We strongly condemn the virulent antisemitism of Kanye West and Nick Fuentes, and call on all political leaders to reject their messages of hate and refuse to meet with them.”

The Republican Jewish Coalition, which has condemned people meeting with Fuentes in the past: “We strongly condemn the virulent antisemitism of Kanye West and Nick Fuentes and call on all political leaders to reject their messages of hate and refuse to meet with them.”

Jonathan Greenblatt, the CEO of the Anti-Defamation League, condemned Trump’s meeting with Fuentes.

“Nick Fuentes is among the most prominent and unapologetic antisemites in the country,” Greenblatt said in a brief interview. “He’s a vicious bigot and known Holocaust denier who has been condemned by leading figures from both political parties here, including the RJC.”

Greenblatt added that the idea that Trump “or any serious contender for higher office would meet with him and validate him by sharing a meal and spending time is appalling. And really, you can’t say that you oppose hate and break bread with haters. It’s that simple.”

Fuentes, who attended the bloody far-right rally in Charlottesville, Virginia, in 2017, is best known for running a white nationalist youth organisation known as America First, whose adherents call themselves groypers or the Groyper Army. In the wake of Trump’s defeat in 2020, Fuentes and the groypers were involved in a series of public events supporting the former president.

At a so-called Stop the Steal rally in Washington in November 2020, Fuentes urged his followers to “storm every state capitol until Jan. 20, 2021, until President Trump is inaugurated for four more years.” The following month, at a similar event, Fuentes led a crowd in chanting “Destroy the GOP,” and urged people not to vote in the January 2021 Georgia Senate runoff elections.

On Jan. 6, 2021, Fuentes led a large group of groypers to the Capitol, where they rallied outside in support of Trump. The next day, Fuentes wrote on Twitter that the assault on the Capitol was “awesome and I’m not going to pretend it wasn’t.”

At least seven people with connections to his America First organisation have been charged with federal crimes in connection with the Capitol attack. In January, Fuentes was issued a subpoena by the House select committee investigating the Jan. 6 attack on the Capitol seeking information about his role in it.

Christie speculated that hosting Ye and Fuentes served a desire particular to Trump: “He can’t stand not having attention all the time,” Christie said. “And so, having someone show up at his club — even if you believe that he didn’t know who Nick Fuentes was — and want to sit with him, feeds the hunger he feels for the attention he’s missing since he left the presidency.”

Ye, who ran for president in 2020 and has said he will run again in 2024, posted on Twitter a video in which he described the dinner. He claimed that Trump was “really impressed” with Fuentes.

Ye also said that he asked Trump to serve as his running mate and claimed that Trump spoke derogatorily about Ye’s ex-wife, Kim Kardashian.

Argentina vs Mexico FIFA World Cup 2022 Highlights: ARG live to fight another day as goals from Messi, Fernandez down MEX