For Trump’s Jewish allies, his dinner with antisemites, Kanye West & Nick Fuentes, is a breaking point

For American Jewry, the debate since Donald Trump's dinner with Nick Fuentes has brought into focus what may be the most discomfiting moment in US history in a half-century or more: "the normalisation of antisemitism". 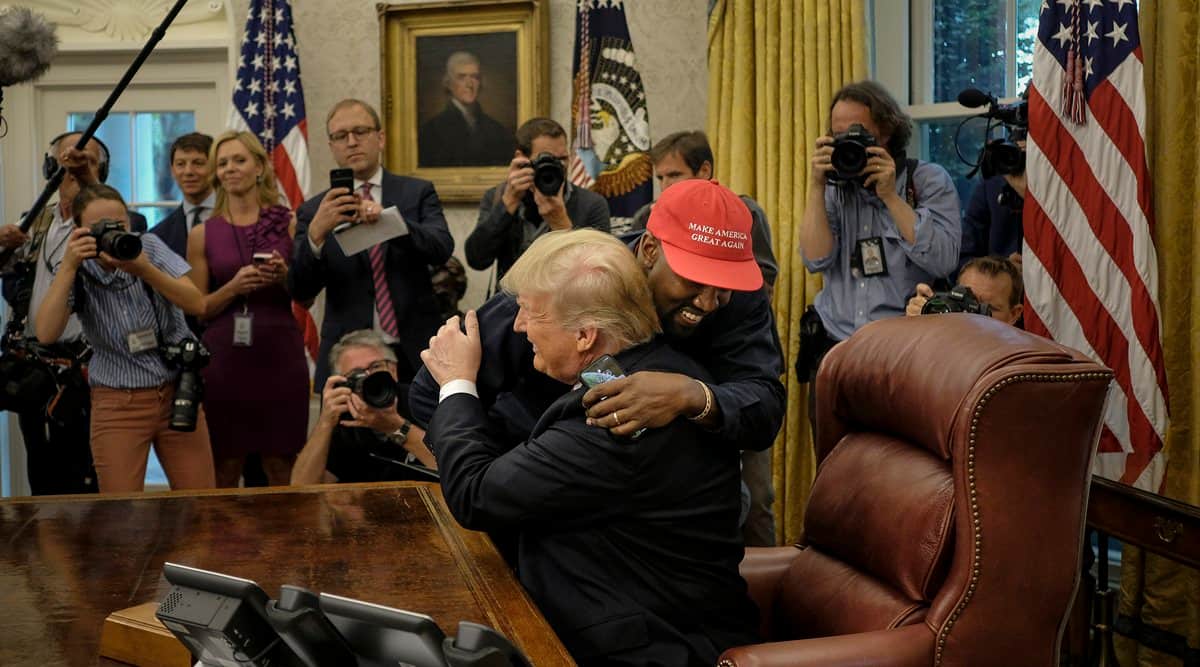 For much of Donald Trump’s presidency, Jewish Republicans rationalized away the bigoted fringe of Trump’s coalition, arguing that the unsavory supporters in his midst and the antisemitic tropes he deployed paled in comparison with the staunchly pro-Israel policies of his administration.

But last week, Trump dined at his Palm Beach, Florida, palace, Mar-a-Lago, with performer Kanye West, who had already been denounced for making antisemitic statements, and with Nick Fuentes, an outspoken antisemite and Holocaust denier, granting the antisemitic fringe a place of honor at his table. Now, even some of Trump’s staunchest supporters say they can no longer ignore the abetting of bigotry by the nominal leader of the Republican Party.

“I am a child of survivors. I have become very frightened for my people,” Morton Klein, head of the right-wing Zionist Organization of America, said Monday, referring to his parents’ survival of the Holocaust. “Donald Trump is not an antisemite. He loves Israel. He loves Jews. But he mainstreams, he legitimizes Jew hatred and Jew haters. And this scares me.”

Subscriber Only Stories
View All
UPSC Key- February 3, 2023: Learn about Coastal Regulation Zone, Follow-o...
JCB Prize for Literature 2022-winning translator Baran Farooqi on growing...
Delhi Confidential: Meet, greet and part in Parliament
In Jamtara, old panchayat buildings turned into libraries and study circl...
Monthly plan to access Budget
Explained |What is anti-Semitism and why is it finding a new voice across the globe?

Not all Republican leaders have spoken out, but Jewish Republicans are slowly peeling away from a former president who, for years, insisted he had no ties to the bigoted far right, but refused to repudiate it. Jewish figures and organizations that have stood by Trump, from Klein’s group to pro-Trump commentator Ben Shapiro to Trump’s own former ambassador to Israel and onetime bankruptcy lawyer, David M. Friedman, have all spoken out since the dinner.

For Jews, the concern extends far beyond a single meal at Mar-a-Lago, though that dinner has become a touchstone, especially for Jewish Republicans.

“We have a long history in this country of separating the moral character of the man in the White House from his conduct in office, but with Trump, it’s gone beyond any of the reasonably acceptable and justifiable norms,” Jay Lefkowitz, a former adviser to former President George W. Bush and a supporter of many of Trump’s policies, said Monday. For American Jewry, the debate since the dinner has brought into focus what may be the most discomfiting moment in US history in a half-century or more.

“The normalization of antisemitism is here,” said Jonathan Greenblatt, CEO of the Anti-Defamation League.

On Monday afternoon, Senator Chuck Schumer, D-N.Y., the Democratic majority leader, went to the Senate floor to denounce Trump’s actions as “disgusting and dangerous,” then called them “pure evil.”

West, a figure with an enormous following, has espoused hatred of the Jews. Basketball star Kyrie Irving has spread antisemitic views with a tweet, though he eventually apologized. Neo-Nazis are returning to Twitter, bringing memes and coded messages not seen for years, now that its new owner, Elon Musk, has reinstated accounts that had been blocked for bigotry. Musk himself on Monday tweeted a cartoon of “Pepe” the frog, a symbol adopted by the alt-right segment of the white supremacist movement. That followed a tweet last month of a German soldier from World War II, which was cited by white nationalist Telegram accounts as evidence of Musk’s like-mindedness.

And House Republican leaders say they will reinstate Reps. Marjorie Taylor Greene, R-Ga., and Paul Gosar, R-Ariz., to committees from which they were jettisoned by Democrats in part for their antisemitic comments or associating with white supremacists like Fuentes.

“The level of antisemitism being expressed, antisemitic acts at a very elevated level, and the acceptability of antisemitism — it is all creating an environment which is, thank God, unusual for the United States, and it has to be nipped in the bud. That’s it. That’s the moment we’re in,” said Rabbi Moshe Hauer, executive vice president of the Orthodox Union, which represents the branch of Judaism that has been most supportive of Trump.

Peter Hayes, a Northwestern University historian, drew comparisons to the 1930s, when popular figures such as Charles Lindbergh, Henry Ford and Father Charles Coughlin used newspapers, radio broadcasts and the speakers circuit to echo the antisemitism then taking root in Germany. American Jews were deeply divided over whether to confront Nazism head-on through protests and boycotts or to work behind the scenes out of fear of inflaming antisemitism, said Hayes, a scholar of that era.

Now, West has promised on Twitter to “go death con 3 ON JEWISH PEOPLE.” Comedian Dave Chappelle delivered a stinging monologue on “Saturday Night Live” on “the Jews” and their numbers in Hollywood. And at the same time, American Jewry is divided over whether denunciations of Trump might harm U.S. policy toward Israel, should he return to power, Hayes said.

“The more people prioritize Israel, the more they are willing to make excuses for Trump, and that just makes me sad,” he said. Trump tried during his presidency to keep the racists and antisemites who supported him at an arm’s distance without banishing them altogether. Many Jews accepted the sleight of hand because his policies delivered gift after gift to the right-wing Israeli government of Benjamin Netanyahu: moving the US embassy to Jerusalem, relentlessly pressuring the Palestinians, recognizing the annexation of the Golan Heights, scuttling the nuclear accord with Iran, pursuing peace accords between Israel and the Gulf States, and above all, dropping any pressure to dismantle Jewish settlements in the occupied West Bank.

The issue nearly came to a head after the racist, antisemitic “Unite the Right” march in Charlottesville, Virginia, in 2017, when Trump said there had been “very fine people on both sides” of the deadly confrontation. Prominent Jewish members of his administration nearly resigned over Trump’s refusal to renounce the bigotry more forcefully.

Klein, in an interview, again defended Trump’s actions on Charlottesville, although he acknowledged being troubled by the president’s failure to clarify his “both sides” remark. Even now, Klein conceded, denouncing Trump was difficult for him. His group honored the former president at a gala Nov. 13 for his actions on behalf of Israel, “and,” Klein said, “he deserved it.”

But Trump’s excuses for dining with Fuentes and West — that he didn’t know the white supremacist and was offering his help to the musician — have fallen short. On Monday, Senator Bill Cassidy, R-La., wrote on Twitter, “President Trump hosting racist antisemites for dinner encourages other racist antisemites. These attitudes are immoral and should not be entertained. This is not the Republican Party.” Senator Susan Collins, R-Maine, denounced the dinner as well.

The Orthodox Union not only called on Trump to condemn his dinner guests and cut all ties with them, but also asked “responsible leaders — especially those in the Republican Party — to speak up, as former US Ambassador to Israel David Friedman has, and be counted among those who explicitly reject antisemitism.” Quoting the Talmud, Hauer, the group’s executive vice president, said Trump’s good deeds on Israel did not negate his bad deeds on hate, and vice versa.

Appearing on CNN on Sunday, Governor Asa Hutchinson of Arkansas, who harbors ambitions to run for the Republican presidential nomination in 2024, said, “I hope someday we won’t have to be responding to what former President Trump has said or done. In this instance, it’s important to respond.” He accused the former president of “empowering” the country’s bigoted extremes.

Others seem to have equivocated as they waited to see whether Trump would again weather the controversy. The Republican Jewish Coalition’s initial statement condemned Fuentes and West for their “virulent antisemitism” but did not mention the former president, instead calling “on all political leaders to reject their messages of hate and refuse to meet with them.”

Facing criticism, Matt Brooks, the group’s executive director, then followed with, “Let me dumb it down for y’all. We didn’t mention Trump in our @rjc statement even though it’s obviously in response to his meeting because we wanted it to be a warning to ALL Republicans. Duh!”

Ari Fleischer, a former press secretary under Bush and a member of the Republican Jewish Coalition’s board, said he accepted Trump’s statement that he didn’t know Fuentes. But he said Trump should have added that, “had he known, Fuentes would never have been allowed into Mar-a-Lago.”

Still, Fleischer tempered his criticism of Trump with an old photo of former President Barack Obama with Louis Farrakhan, the virulently antisemitic leader of the Nation of Islam. And he added, in an email: “I should also mention that I do not consider Trump an anti-Semite and I remain appreciative of his deep support for Israel and for the four peace treaties he helped secure in the Middle East. I do consider the former president someone who mistakenly succumbs to flattery from dangerous places.”

Mike Pence, Trump’s vice president, also said Monday that he did not believe Trump was an antisemite or a racist. But he told Leland Vittert on the broadcaster NewsNation that Trump had “demonstrated profoundly poor judgment in giving those individuals a seat at the table” and that he should apologize and “denounce them without qualification.”

In Opinion |Why India must stand with Palestine

Many Republicans have said nothing, including Rep. Kevin McCarthy of California, who aspires to become the House speaker next year, and Gov. Ron DeSantis of Florida, Trump’s strongest rival for the Republican presidential nomination in 2024.

Calls and emails to Jewish figures of Trump’s administration, such as former Treasury Secretary Steven Mnuchin, and to prominent Jewish Republican donors including Miriam Adelson, Lewis Eisenberg and Paul Singer, all went unanswered. Gary Cohn, a senior economic adviser who nearly quit after Charlottesville, declined to comment. Ron Lauder, a prominent fundraiser, issued a statement reading, “Nick Fuentes is a virulent antisemite and Holocaust denier plain and simple. It is inconceivable that anyone would associate with him.”

For his part, Trump shows no sign of contrition. His spokesperson, Liz Harrington, told a right-wing broadcaster Monday that Trump was “probably the most pro-Israel president we’ve ever had,” then added: “President Trump is not going to shy away from meeting with Kanye West.”