Donald Trump launches 2024 US presidential run, getting jump on rivals

Trump's expected announcement late on Tuesday follows a disappointing showing in last week's midterm congressional elections that many Republicans blame on him. 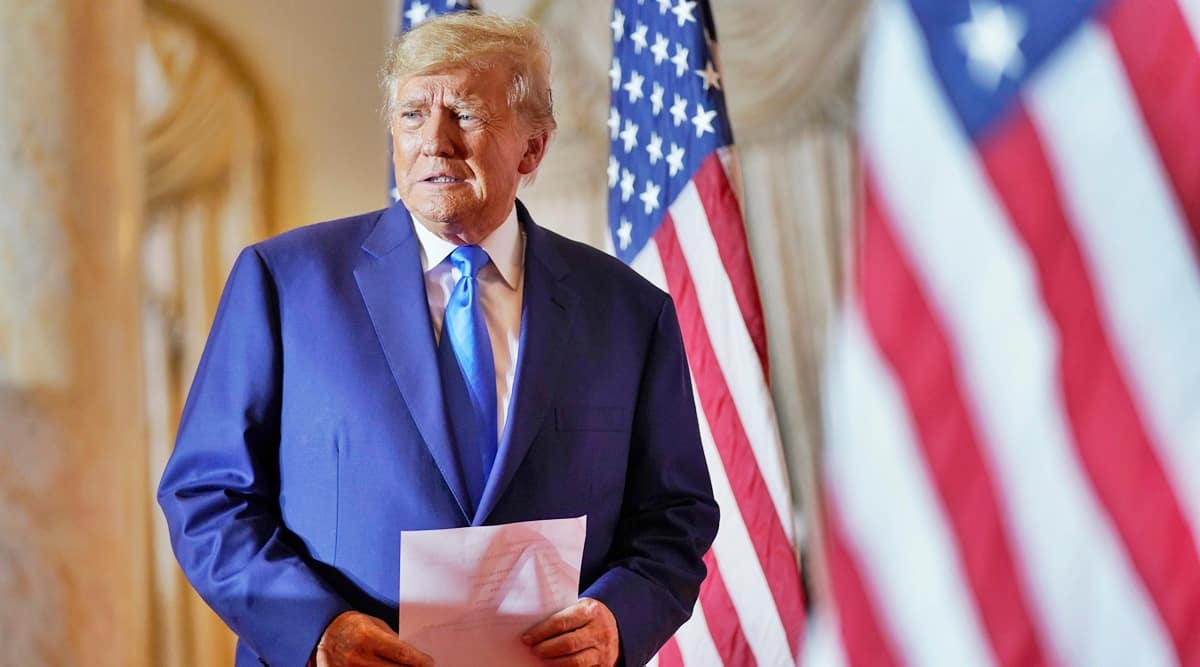 Donald Trump, who has mounted relentless attacks on the integrity of US voting since his 2020 election defeat, on Tuesday launched a bid to regain the presidency in 2024, aiming to pre-empt potential Republican rivals.

Trump, seeking a potential rematch with Democratic President Joe Biden, made his announcement at his Mar-a-Lago estate in Florida a week after midterm elections in which Republicans failed to win as many seats in Congress as they had hoped.

In a speech broadcast live on US television, Trump spoke to hundreds of supporters in a ballroom decorated with several chandeliers and lined with dozens of American flags.

“In order to make America great again, I am tonight announcing my candidacy for president of the United States,” Trump said to a cheering phone-waving crowd of donors and longtime supporters.

Earlier in the day, aides filed paperwork with the US Federal Election Commission setting up a committee called “Donald J. Trump for President 2024. There is a long road ahead before the Republican nominee is formally selected in the summer of 2024, with the first state-level contests more than a year away.

BREAKING: President Donald J. Trump, the 45th President of the United States, announces his candidacy for re-election as president in 2024. pic.twitter.com/R7zBQmhLtk

Trump’s announcement comes earlier than usual even in a country known for protracted presidential campaigns and signals his interest in discouraging other possible contenders such as Florida Governor Ron DeSantis or his own former vice president, Mike Pence, from making a bid for the Republican Party’s 2024 presidential nomination.

Trump played an active role in the midterms, recruiting and promoting candidates who echoed his false claims that the 2020 election was stolen from him through widespread voting fraud.

But many of his candidates in key battleground states lost, prompting some prominent Republicans to openly blame him for promoting weak candidates who derailed the party’s hopes of taking control of the Senate.

Control of the House of Representatives remains up in the air, but Republicans are on track to win a razor-thin majority.

Trump will seek his party’s nomination even as he faces trouble on several fronts, including a criminal investigation into his possession of government documents taken when he left office as well as a congressional subpoena related to his role in the Jan. 6, 2021, US Capitol attack by his supporters. Trump has called the various investigations he faces politically motivated and has denied wrongdoing.

Trump, 76, is seeking to become only the second US president in history to serve non-consecutive terms, after Grover Cleveland, whose second stint ended in 1897. Biden, 79, said last week he intends to run for re-election and will likely make a final decision by early next year.

In an Edison Research exit poll, seven out of 10 midterm voters expressed the view that Biden, who remains deeply unpopular, should not run again. In the same poll, six of 10 respondents said they had an unfavorable opinion of Trump.

During his turbulent 2017-2021 presidency, Trump defied democratic norms and promoted “America First” nationalism while presenting himself as a right-wing populist. He became the first US president to be impeached twice, though congressional Democrats failed in their attempts to remove him from office.

Donald Trump and Melania Trump will be in quarantine till their test results come. (File Photo)

At a rally that preceded the Capitol attack, Trump urged supporters to “fight like hell” and march on Congress to “stop the steal,” but the mob that subsequently stormed the Capitol failed to prevent Congress from formally certifying Biden’s election victory.

Even though court and state election officials rejected Trump’s false election claims, about two-thirds of Republican voters believe Biden’s victory was illegitimate, according to Reuters/Ipsos polling.

Trump has elicited passionate support from many Americans, especially white men, Christian conservatives, rural residents and people without a college education. Critics accuse Trump of pursuing policies built around “white grievance” in a nation with a growing non-white population.

The political landscape has changed dramatically since he won the presidency in 2016 and some in his party, including major donors, are exhausted by the drama surrounding him.

His single term as president stands as one of the most contentious in U history. He secured sweeping tax cuts, imposed curbs on immigration and orchestrated a rightward shift of the federal judiciary, including the Supreme Court. He alienated US allies abroad, abandoned international agreements on trade and climate change, and praised authoritarian leaders abroad, including Putin.

The Democratic-led House impeached him in 2019 on charges of abuse of power and obstruction of Congress after he pressed Ukraine’s leader to investigate Biden and his son on unsubstantiated corruption accusations. The Senate acquitted him, thanks to Republican support.

The House impeached Trump again a week before he left office, this time for incitement of insurrection. He was acquitted by the Senate after he left office, again thanks to Republican senators.

To prepare for next year, IIT professionals compiling data on stubble burning