Even as an All-Afghan conference that brought Afghanistan's warring sides together was ending, the airstrike killed seven people, six of them children. Residents carry bodies of those who were killed in an airstrike during a protest in Baghlan province, northern Afghanistan, Tuesday, July 9, 2019. (AP Photo/Mehrab Ibrahimi)

On Sunday morning, as Taliban officials in Qatar began discussing with an Afghan delegation the need to reduce civilian casualties, more than 100 schoolchildren were wounded during a Taliban attack in eastern Afghanistan.

The two attacks underscored a sobering reality in Afghanistan: Public pledges to spare civilians mean little as long as the combatants seek leverage by continuing attacks that endanger innocent bystanders. As negotiations inch toward a possible peace deal, those commitments will be tested daily on the ground.

The unprecedented joint declaration on civilian casualties came after the Taliban met for the first time with Afghan officials, face to face in a luxury hotel ballroom. The so-called intra-Afghan dialogue was followed Tuesday by a pause in the seventh round of peace talks between the United States and the Taliban in Doha, Qatar.

Officials said the talks were suspended for several days so that each side could hold discussions with its leadership.

On Twitter on Tuesday, Zalmay Khalilzad, the chief American negotiator, said: “I had a meeting with the Taliban this morning. Headed to China now and then will return to Washington to report and consult on the #AfghanPeaceProcess.”

The American-Taliban talks also were held against the backdrop of civilian carnage in Afghanistan. On July 1, as negotiators met, a Taliban attack in Kabul killed 40 people, most of them civilians. One child was among the killed and 51 more were wounded.

In Doha that day, neither side offered a public comment on the attack, which was aimed at a government facility but also struck a school filled with students. 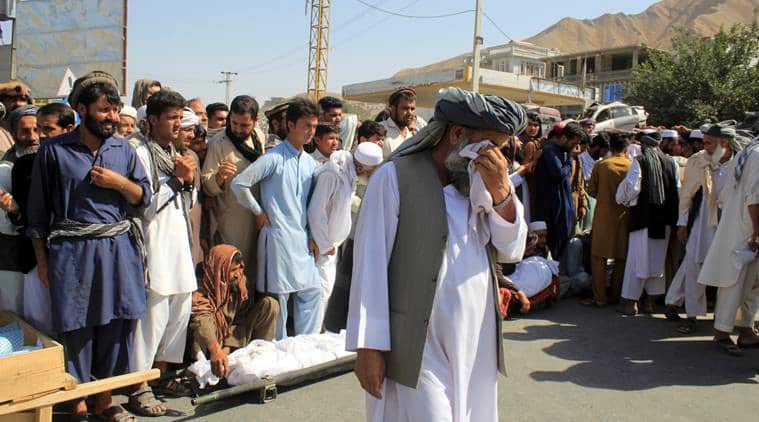 An Afghan elderly man cries near bodies of those who were killed in an airstrike during a protest in Baghlan province, northern Afghanistan, Tuesday, July 9, 2019. (AP Photo/Mehrab Ibrahimi)

On Sunday, after the Taliban attacked a government intelligence facility in eastern Afghanistan, also striking a nearby school, the headmaster had plenty to say. Hekmatullah Zaki, who directs the Afghan Rahmati private school in the city of Ghazni, said most of the students in class that day were injured — more than 100.

“The whole place was covered with blood — I was trying to decide who to help first,” Zaki said.

One student was killed, he said. Others sat stunned in their classrooms, bloodied and wailing, as portions of the building collapsed around them.

“Please,” Zaki said. “We ask all sides of the war to not target children and schools for their political targets.”

Abdul Qadi, a Ghazni resident, said his two sons, both grade-schoolers, had not been wounded in the attack, “but both can’t speak because they’re both so scared.” Qadi said he blamed the government just as much as the Taliban because the authorities placed an intelligence agency office in a residential neighborhood near at least one school.

Twelve people died and at least 170 were wounded, said Wahidullah Mayar, a spokesman for the ministry of health.

Since the American-Taliban talks began late last year, both sides have escalated military operations to gain leverage at the peace talks.

Afghan President Ashraf Ghani, in comments at a Cabinet meeting Tuesday, said of the Taliban bombings: “An attack on children is not a sign of religion or being Afghan. If they think they can take advantage, they should think again.”

In April, the United Nations reported that for the first time since the agency began documenting civilian casualties a decade ago, more civilians were killed in the first quarter of 2019 by Afghan government and U.S. forces than by the Taliban and other insurgents.

Last year was the single-deadliest year for civilians in Afghanistan in a decade, the U.N. said in February. Of the 3,804 civilians killed last year, 927 were children — also a record.

“Children are at increased risk to these kind of attacks, and their bodies even less able to withstand the force of a blast,” Onno van Manen, the Afghanistan country director for Save the Children, said in a statement after the Ghazni attack. “Physical injuries can pale in comparison to the emotional scars many children may carry with them for years.”

During two days of discussions in Doha between Taliban officials and an Afghan delegation, there were heartfelt exchanges about sorrow and loss. Afghan representatives spoke of losing loved ones to Taliban bombings and attacks. Taliban officials described years in detention, and spoke of friends and family members killed in air or night raids by Afghan and U.S. forces.

The talks ended early Tuesday morning with the joint pledge to reduce civilian casualties and assure security for public institutions like schools, hospitals and residential areas.

That same day, four doctors were killed during the early-morning raid by Afghan commandos on a hospital in central Wardak province, according to Sharifullah Hotak, a member of the provincial council. Muhibullah Sharifzai, the spokesman for the provincial governor, said two hospital employees had been killed, not four.

Sharifzai said that the raid had targeted the top Taliban health official for the province, and that he had been killed at the hospital.

On Tuesday, Sediq Sediqi, the spokesman for Ghani, condemned the Taliban for the Ghazni attack but did not mention the hospital raid. “The president tells the security forces every day that wherever they carry out operations, no civilians should suffer casualties,” Sediqi said at a news conference.

In Doha, Sher Mohammad Abas Stanekzai, the Taliban’s chief negotiator, said most civilian casualties were caused by Afghan and U.S. forces. He said that reports of civilian casualties in the Ghazni attack had been exaggerated and that all the casualties had been members of intelligence forces except for civilians with minor injuries from shattered windows.

But he said the Taliban would try harder to improve measures already in place.

In Ghazni, Ahmad Shah, 60, said that his home was leveled and that his grandson suffered head and hand wounds in the Taliban attack Sunday.

“So my house is destroyed, and I have no place to stay,” Shah said. “Let’s see what the government will do for us.”

Among those still missing in NRC, son of freedom fighter and Assam agitation participant