Desperate migrants on the border: ‘I should just swim across’

Thousands of Central American migrants have been clustered in Mexican border cities like Matamoros for months, blocked from seeking asylum in the United States by a series of escalating restrictions. 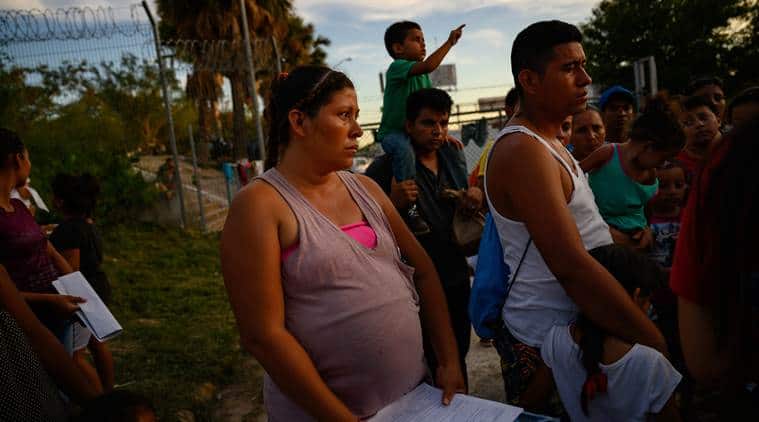 When Ana Galeano Valdez, who is six months pregnant, crossed for the first time, water rushed into her raft until it reached her chest. She reached the other side but was delivered back to Mexico by US immigration officials. (The New York Times)

Peering out over the Rio Grande, separated from Brownsville, Texas, by only about 100 feet of coursing water, Ana Galeano Valdez talked herself down from a perilous decision — something she has done several times in the weeks she has been living in a tent in one of Mexico’s most dangerous cities.

“When I’m this close and I can see it, I’m tempted to think I should just swim across again, but for what?” she said on a recent evening, as the sun set over South Texas.

Last week, a 26-year-old mother and her toddler drowned crossing the river from Matamoros, Mexico — the second parent and child to die there since June. When Galeano Valdez, who is six months pregnant, crossed for the first time, water rushed into her raft until it reached her chest. She reached the other side but was delivered back to Mexico by US immigration officials.

Thousands of Central American migrants like Galeano Valdez have been clustered in Mexican border cities like Matamoros for months, blocked from seeking asylum in the United States by a series of escalating restrictions. In some places, they are facing dangers — including kidnapping, murder and sexual assault, according to a State Department travel advisory — comparable to what caused many to flee their home countries in the first place.

Their prospects for gaining entry went from slim to nearly impossible early this month, when the Supreme Court let remain in place a new rule requiring migrants who traveled through other countries to reach the United States to show they have already been denied asylum along the way before they can apply for refuge on the border. 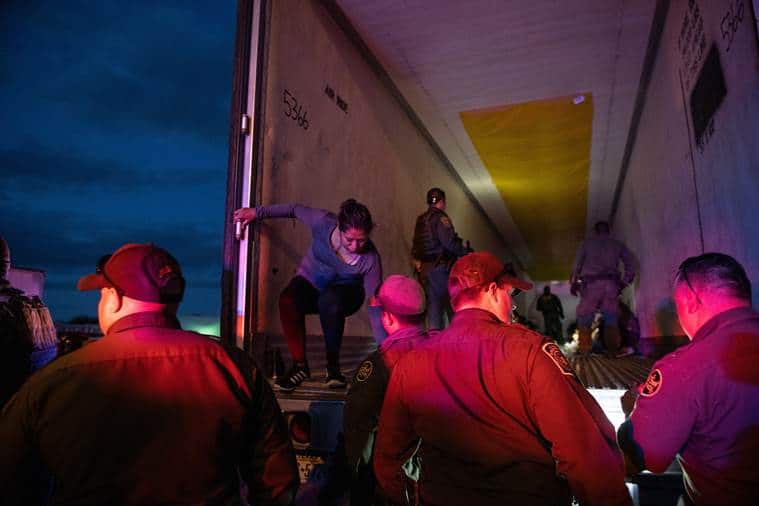 Over the last 18 months, many of the hundreds of thousands of migrants who have crossed have sought out Border Patrol agents, rather than hiding from them, in order to request asylum. (The New York Times)

While some have given up, taking free transportation provided by the US government and United Nations back to their homes in Central America, many others who are stuck in Matamoros said that desperation had led them to consider treacherous and potentially life-threatening border crossings — by charging across the river, climbing into hot and airless tractor-trailers driven by human smugglers, or both.

The emerging scenes of furtive crossings reflect an important change in dynamics on the border. Over the last 18 months, many of the hundreds of thousands of migrants who have crossed have sought out Border Patrol agents, rather than hiding from them, in order to request asylum.

The Trump administration’s new policies have played a role in sharply reducing these numbers, but they also appear to be driving people further underground. In a single day last week, Border Patrol agents in the city of Laredo, Texas, apprehended 111 people crammed into the backs of three different tractor-trailers, one of which was 104 degrees inside when it was opened.

A caller alerted the agents to one of the vehicles, sending more than a dozen officers from the local police and the Border Patrol to the scene. The agents surrounded the unmarked truck, and prepared to grab anyone who tried to flee. When they unlocked the trailer, they found 41 men and women, plus two 17-year-olds, seated quietly with their backs against the wall. Some had tears streaming down their faces as they jumped to the ground and were loaded into police vans.

Before dawn the next morning, agents had already stopped another large truck at a checkpoint, this one with 88 people crammed inside. 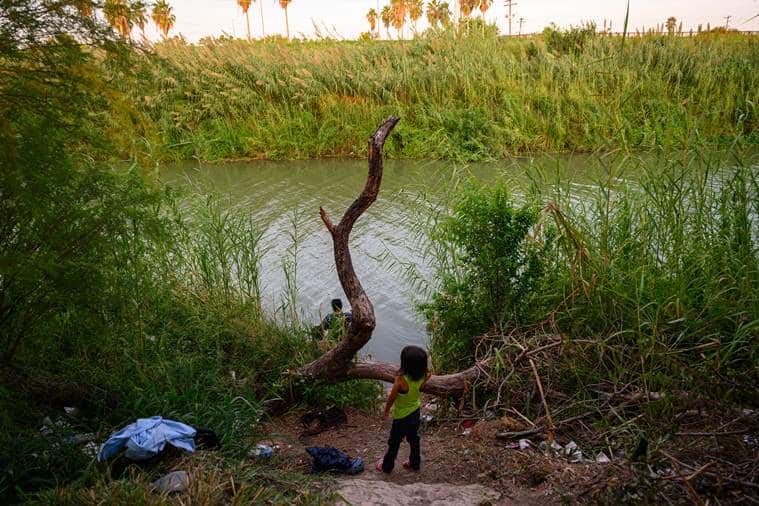 While some have given up, taking free transportation provided by the US government and United Nations back to their homes in Central America, many others who are stuck in Matamoros said that desperation had led them to consider treacherous and potentially life-threatening border crossings — by charging across the river, climbing into hot and airless tractor-trailers driven by human smugglers, or both. (The New York Times)

The number of migrants caught hiding in tractor-trailers along the border has gone up by 40% this year, according to the Border Patrol. Narcizo Ramos, a special operations supervisor in Laredo, said many more suspected smugglers have sped away from Border Patrol checkpoints or traffic stops in what the agency calls “failures to yield,” which are rising in frequency.

Agents have pulled more than 2,700 migrants so far this year out of tiny rooms in homes and hotels, known as stash houses, that are used by smugglers to hide people temporarily between legs of their journeys into the United States. Stash house raids have gone up 50% in Laredo this year.

The terrain around Laredo is a smuggler’s paradise: thick groves of mesquite trees and 25-foot-high stalks of an invasive weed called carrizo cane block most of the view from government cameras, mounted on high poles that look down on 170 miles of border in the region.

The same day that his colleagues intercepted three tractor-trailers, Jonathan Thornton, 31, a six-year veteran of the Border Patrol, responded to alerts from colleagues who had spotted migrants illicitly crossing the Rio Grande. Thornton sped up and down the river in his SUV several times in pursuit.

Each time, he hurried through thick groves of carrizo cane, using gloves to swipe at the foliage, but never encountered more than wet footprints.

Finally, it seemed that his luck would change when someone claiming to be a resident called — as Laredo people often do — reporting a group of migrants in a church parking lot. But when he arrived at the church, no one was there.

“It was probably a bogus call,” possibly from a smuggler hoping to divert the agents, Thornton said.

On the Mexican side of the border, the smugglers have become the last hope for many migrants who are fearful about waiting months while their US asylum requests are being processed, knowing that they are likely to be denied anyway.

Many said that applying for asylum in other countries, as is required under the latest policy, felt like a pointless endeavor.

Countries such as Guatemala can be dangerous themselves and have years long backlogs in their asylum programs.

Mexico’s often-turbulent border cities, many migrants say, are no better than the conditions they left in their home countries. The State Department has issued a “do not travel” warning for Americans considering going to Matamoros and Nuevo Laredo, on the same level as the warnings in place for North Korea and Syria, because of the prevalence of violent crime — much of it carried out by the drug cartels that operate along the border.

Galeano Valdez is one of about 600 migrants who have been living in donated tents, within sight of South Texas. Their temporary homes are strewn across a concrete plaza that is littered with trash and, in some places, human waste. Those who cannot afford to pay local businesses to let them shower must use the river, which is both dirty and dangerous. Strong flows under the surface often pull people in. Only a handful of portable toilets, swarming with black flies, have been provided by the Mexican government.

“I can’t take it anymore being here in Mexico,” said Galeano Valdez. She traveled from El Salvador, where she said she had lived in fear of frequent violence and had not been able to find work in six years.

Galeano Valdez said she was tired of constantly looking over her shoulder in Matamoros to avoid the nightly shakedowns of asylum-seekers by people associated with the cartels.

She had hoped to establish herself in the United States and then be joined by her four other children, who are living in her home country with family members, but her optimism was fading.

“I already feel like I’m going crazy here,” she said.

Marisela Arely Ulloa Zelaya cried as she fanned her 7-year-old son, Carlos, who was lying in their tent at the plaza with a wet towel on his forehead.

The boy’s appetite had started to dwindle around the time the family was detained in Texas by US immigration officials Aug. 1, Ulloa Zelaya said. Five days later, they were released out onto the plaza and told to come back Oct. 6.

Their situation became more dire when Carlos started vomiting and having diarrhea. A US aid worker named Andrea Rudnik noticed how thin he had become — his weight dropped to 32 pounds — and took him a nearby clinic. A pharmacist there suggested that Carlos be taken to a hospital, but neither the family nor Rudnik could pay for emergency treatment. They returned to their home on the concrete with $6 worth of prescription pain medication and Pedialyte.

That evening, Glady Cañas Aguilar, a Mexican aid worker, made her way through the group, trying to discourage person after person from making dangerous decisions.

At the river’s edge, a father holding the hand of his young daughter, who was sucking her thumb, craned his neck to get a look at the river below. “Is it safe?” he asked, carrying a zipped plastic bag full of donated soap, toothbrushes and toothpaste.

“No,” Cañas Aguilar shot back, “Don’t go down there, especially with children.”

Soon after, another group of four young men crawled up onto the banks from where they had been bathing in the river, saying they had been returned to Mexico earlier that day by the US government to await their asylum hearings. One of them, Alexander Mejilla, 28, said that it was his fifth time being remanded back to Mexico, but that he planned to try to cross illegally again from Reynosa, another border city, the next day.

“I need a place to live,” he said, explaining that he and his family had been living with his grandmother at her house in Honduras. “One day she’s going to die,” he said, “My uncles are going to sell her house, and then we’ll have nowhere to go.”

Days earlier, Cañas Aguilar said, she had put a 28-year-old man from Honduras and his 2-year-old son onto a bus after the father experienced what seemed to be a nervous breakdown. After three straight nights without sleep, brought on by the heat and stress, the man had become disoriented and started speaking in garbled sentences, she said. He threatened to cross the river into the United States with his son, at which point other residents of the plaza went to Cañas Aguilar for help.

Cañas Aguilar persuaded the man to take his son and go home.

“It is a question of stress, of despair, because it’s not pleasant being here,” she said, “They become frustrated, agitated, distrustful. These are the feelings of the moment they are living.”