Coronavirus outbreak: "It was decided that steps may be taken to prepare for possible evacuation of Indian nationals in Wuhan. Accordingly, the Ministry of External Affairs will make a request to the Chinese authorities," a statement issued by the Indian government said.

Coronavirus outbreak: Over 2,700 cases of the infection have been confirmed so far in China.

Coronavirus outbreak highlights: The Indian government Monday decided to take steps for the possible evacuation of over 250 Indians from the Chinese city of Wuhan, the epicentre of the coronavirus outbreak, and announced a raft of precautionary measures to deal with suspected cases.

Earlier today, even as the death toll from the deadly coronavirus mounts to 80 in China, the Indian Embassy in Beijing also asked Indian nationals in Wuhan to inform them if they encounter any shortage of food, water, and other essential supplies. The embassy also asked the Indian nationals who are not in possession of their passports to inform it with details of name, passport number and to whom the document was submitted. Explained: What is coronavirus?

Tamil Nadu Health Minister C Vijayabaskar said, "We are well prepared and taking all precautionary and preventive steps (against Coronavirus). So far, no case has been identified in the state as well as the country. I appeal to the public to not panic." (ANI)

Maharashtra government: 3,756 passengers screened at Mumbai International Airport till 26th January. So far 4 persons suspected with #Coronavirus have been admitted to Mumbai's Kasturba hospital while 2 are admitted to Pune's Naidu hospital. (ANI)

Centre to take steps for possible evacuation of Indians from Wuhan

The Centre on Monday decided to take steps for the possible evacuation of over 250 Indians from the Chinese city of Wuhan, the epicentre of the coronavirus outbreak. Officials said Ministry of External Affairs will make a request to the Chinese authorities for the evacuation of Indian nationals, mostly students, stuck in Wuhan city.

"It was decided that steps may be taken to prepare for possible evacuation of Indian nationals in Wuhan. Accordingly, the Ministry of External Affairs will make a request to the Chinese authorities," a government statement said.

China's capital Beijing reported its first death caused by the new coronavirus on Monday, the state television station CCTV said. The 50-year-old, who had been to Wuhan, centre of the coronavirus outbreak, had been confirmed infected with the virus on Jan. 22, CCTV reported. (Reuters)

Hyderabad: Hospital staff is seen outside the special Isolation Ward set up to provide treatment to any suspected case of the coronavirus. (PTI) Thermal sensors set up at Amritsar airport to screen passengers

No case of the virus has been detected so far in Punjab.

Gujarat Chief Minister Vijay Rupani on Monday urged External Affairs Minister S Jaishankar to intervene after parents of students studying in Wuhan, the Chinese city in the grip of novel coronavirus, sought help from the BJP government here for their safe return.

In a release, the Gujarat government said as many as 100 students from the state are stuck in China, and informed that Rupani has spoken to Jaishankar on the phone and asked him to intervene to ensure their safe return home. (PTI)

The mayor of the Chinese city where a deadly virus broke out says he would be willing to resign if it helps the government contain its spread. Mayor Zhou Xianwang told state broadcaster CCTV that both he and Wuhan's Communist Party secretary are willing to take responsibility for closing off the city, including being removed from office. (AP)

A woman who returned from China last week was admitted to a Patna hospital on Monday with symptoms similar to those of coronavirus that left 80 people dead in the neighbouring country, officials said. The woman who is in her 20s returned home to Chapra, the headquarters of Saran district, from China on January 22 and she was taken to the Chapra Sadar Hospital three days later. Click here to know more.

Crude prices extended declines on Monday, dropping below $60 for the first time in nearly three months as the death toll from China's coronavirus rose and more businesses were forced to shut down, stoking expectations of slowing oil demand. Brent crude fell by $1.95 a barrel, or 3.2%, to $58.75 by 1128 GMT, its lowest since late October and the biggest intra-day fall since Jan. 8. U.S. crude was down by $1.77, or 3.3%, at $52.42. (Reuters)

Self-declaration signage and other advisories at the Chennai airport.

Passengers travelling on flights from China being screened for coronavirus at Delhi's IGI airport.

The Odisha government on Monday said elaborate arrangements have been made at state-run hospitals to deal with possible Novel Corona Virus (nCoV) cases.

"The state is ready to deal with any eventuality. Though we have no border with Nepal where one case has been confirmed, we have four flights a week to Kuala Lumpur and three nCoV cases have been detected there," Odisha's Health and Family Welfare Secretary N B Dhal was quoted as saying by news agency PTI.

Would like to offer assistance on behalf of Kerala: CM Pinarayi Vijayan

Kerala CM Pinarayi Vijayan's letter also reads, 'on behalf of the state govt of Kerala, I would like to offer assistance of medical professionals from our side in case the Indians being evacuated from Wuhan are to be medically attended to. Kerala CM Pinarayi Vijayan Monday wrote a letter to Prime Minister Narendra Modi saying that he has been apprised that the situation in Wuhan province of China has turned "grave" and suggested that it maybe be "appropriate to consider operating a special flight to Wuhan/a nearby functional airport and airlift the Indian nationals stranded there".

Benchmark Sensex plunged over 458 points on Monday following intense selloffs in many overseas markets amid fears over the global economic impact of China's deadly coronavirus.

Markets across the world are increasingly turning volatile on concerns over the global economic impact of the coronavirus after China announced sharp increases in the number of people affected in the outbreak, news agency PTI reported.

China on Monday expanded sweeping efforts to contain the viral disease by extending the Lunar New Year holiday to keep the public at home and avoid spreading infection as the death toll rose to 80.

With 4 kg potatoes, 2.5 kg onions, 1 kg carrots, rice, instant noodles and surgical masks, Srikanth (41), a scientist, is currently on “house arrest” in Wuhan. While the death toll has risen to 56 across China, 2,008 confirmed cases, including 23 from abroad, have been reported so far, Chinese health authorities said on Sunday.

Wuhan, in the central Chinese province of Hubei, is on lockdown. Transport restrictions have been strictly enforced, forcing many like Srikanth to remain within the four walls of their homes for the last five days. Click here to read more.

Coronavirus outbreak: 80 dead, over 2,700 infected as virus spreads across China

China extended its Lunar New Year holiday three more days to discourage people from traveling as it tries to contain the spread of a viral illness that has caused 80 deaths, the government said Monday. There were 2,744 confirmed cases by midnight Sunday, the National Health Commission announced.

Tens of millions of Chinese who visited their hometowns or tourist spots were due to return home this week in the world’s largest movement of humanity, raising the risk the virus might spread in crowded trains and planes. (AP)

A middle-aged man, who was admitted in a Bengaluru hospital for showing symptoms of cold and cough after his recent return from China’s Wuhan city, has been tested negative for the deadly coronavirus, which has so far claimed the lives of 80 people. “The patient is kept under observation in an isolation ward for now and will be discharged soon. The samples of his throat swab, which were sent to the National Institute of Virology, Pune, tested negative,” said Dr Prakash, Joint Director, Communicable Diseases, Karnataka Department of Health and Family Welfare. Read here 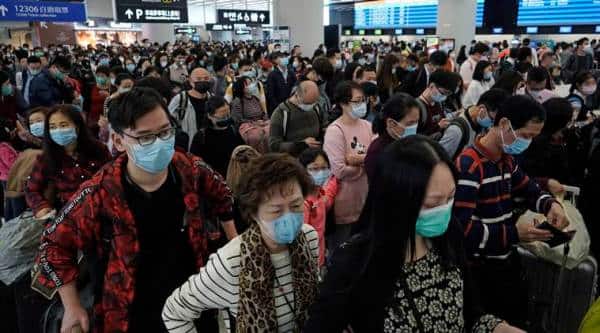 FILE - In this Thursday, Jan. 23, 2020 file photo, Passengers wear protective face masks at the departure hall of the high-speed train station in Hong Kong. Fear about the effects of a new virus found in China is spreading faster through financial markets around the world than the sickness itself. (AP)

The epidemic has revived memories of the SARS outbreak that originated in China and killed nearly 800 as it spread around the world in 2002 and 2003. Its spread has come amid China’s busiest travel period of the year when millions crisscross the country or head abroad for the Lunar New Year holiday.

A notice from the U.S. Embassy in Beijing said there would be limited capacity to transport U.S. citizens on a Tuesday flight from Wuhan that will proceed directly to San Francisco. It said that in the event there are not enough seats, priority will be given to individuals “at greater risk from coronavirus.”

The French Consulate also was considering the evacuation of its nationals from the city. It said it’s working on arranging a bus service to help French citizens leave Wuhan.

French automaker PSA Group said it will evacuate its employees from Wuhan, quarantine them and then bring them to France.

Japan was also making preparations to fly its nationals out of Wuhan.