Negotiators, here, are trying to finalise the rulebook of the 2015 Paris Agreement, containing the processes and guidelines, that will implement its provisions. 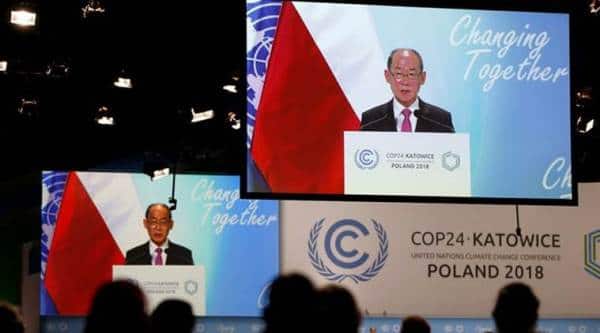 For the second day today, negotiators at the climate change conference here remained huddled within the backrooms, unable to make a significant progress on any of the contentious issues.

“The progress on the negotiations has been extremely slow till now. It needs to be expedited. There are few days remaining in this conference and we can only hope that there will be a breakthrough very soon,” A K Mehta, the head of Indian delegation, said.

Negotiators, here, are trying to finalise the rulebook of the 2015 Paris Agreement, containing the processes and guidelines, that will implement its provisions. The issues under discussion are mainly procedural in nature. They are also very technical and complicated, involving details.

More than the lack of progress, the developing countries were angered by the repeated attempts by the developed countries to erase the distinction between developed and developing that has been at the heart of the climate negotiations.

The current draft of the main negotiating text acknowledges the differentiation between developed and developing country parties at just one place, and that too was in brackets, meaning it was up for negotiation.

“A balanced outcome means there can be no compromise on the guiding principles of equity and differentiation. The draft text (available now) has tried to hit that balance. This is clearly going to be unacceptable to the developing countries. You cannot have progress without giving adequate importance to the differentiation principle,” Vaibhav Gutpa, senior programme lead at the Council on Energy, Environment and Water, said.

Differentiation between developed and developing countries has been central to the negotiations, and is enshrined in the 1992 UN Framework Convention “on Climate Change, the mother agreement, and then in the 2015 Paris Agreement. Countries have a common but differentiated responsibility to act on climate change. Developed countries are mandated to do much more, both in terms of reducing their emissions as well as in providing money and technology for dealing with climate change, than the developing countries.

Over the years, developed countries have tried to do away with the differentiation as much as possible, and the distinctions made in the 2015 Paris Agreement are much weaker in this regard as compared to the 1992 UN Framework Convention. While working on the rulebook here, attempts are being made to whittle it down even further.

The rule book deals with such issues as accounting standards to measure emissions, processes for monitoring, reporting and verification of climate actions being taken by individual countries, mechanisms to raise financial resources and ensure the flow of funds for climate projects, and institutions to facilitate the diffusion of appropriate technologies to countries and regions that need them.

Developing countries have been arguing that there cannot be common standards for all countries, for example, to report their climate actions in a certain matter. This could be due to the differences in the capabilities of the countries to gather and process data, for example.

Fresh drafts of agreement texts were expected on Tuesday afternoon but have twice missed the deadline. They are expected late on Tuesday evening now. Negotiators have to finalise an agreement by Friday.