Need trillions of dollars to meet net-zero target by 2070: India at COP27

Every country has to submit its long-term strategy, showing how it plans to reach its net-zero target. Developed countries have to reach net-zero status by 2050, China has decided to get there by 2060, while India has set 2070 as its target year. 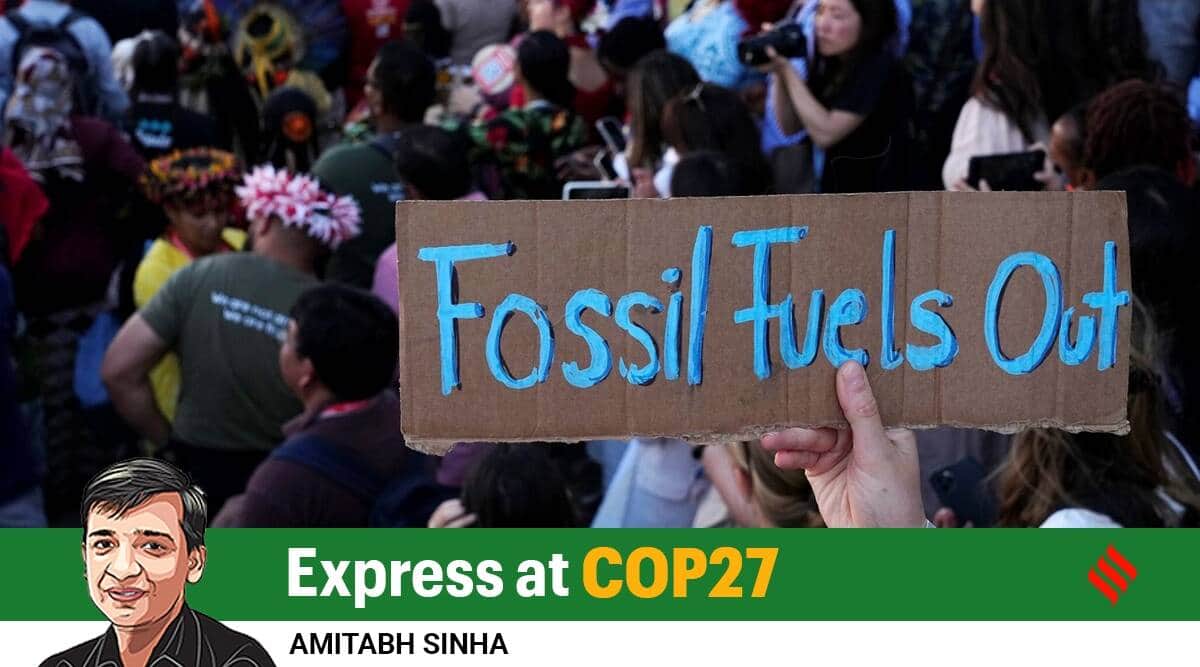 A sign reading "fossil fuels out" is displayed during a demonstration at the COP27 U.N. Climate Summit, November 12, 2022, in Sharm el-Sheikh, Egypt. (AP)

INDIA WOULD need “tens of trillions of dollars by 2050” to transition to a low-carbon development path that would take it to the promised net-zero status by 2070, the government said on Monday.

Separately, nearly two trillion dollars would be required just for adaptation purposes in the short term between now and 2030, it said, in its long-term strategy document that was released at the climate change meeting here.

Read |At COP27, India bats for phase-down of all fossil fuels and not just coal

Every country has to submit its long-term strategy, showing how it plans to reach its net-zero target. Developed countries have to reach net-zero status by 2050, China has decided to get there by 2060, while India has set 2070 as its target year.

India has provided details of the kind of transitions it is seeking to make in electricity, transport, building and forests sectors, along with the research and development efforts and finance that would be required to make these transitions. Unlike some other countries that have submitted their long-term strategies, India has avoided mentioning specific details like numbers, mid-term targets, scenarios, pathways or projections in its journey towards the net-zero goal.

For example, for the transport sector, India has said it will achieve decarbonisation through improved fuel efficiency, adoption of electric vehicles and cleaner fuels, and promotion of public transport. But it does not mention any mid-term goals or the amount of money that it plans to invest to make this work.

The 121-page strategy document has nothing that can be treated as interim targets. India’s climate targets, as for everyone else, is only till 2030. These are what are known as nationally determined contributions, or NDCs, which have to be renewed for a further five-year period every five years.

Environment Minister Bhupendra Yadav emphasised that India’s long-term strategy towards a low-carbon development must be seen in the context of its “right to equitable and fair share of the global carbon budget”. He said the concepts of “climate justice” and “sustainable lifestyle” were incorporated into the strategy.

“The journey to net-zero is a five-decade-long one and India’s vision is therefore evolutionary and flexible, accommodating new technological developments and developments in the global economy and international cooperation… Our document also makes it clear that this effort to transform India’s economy would require huge financial resources,” Yadav said, while releasing the document.

Read in Explained |Where is COP venue Sharm el-Sheikh, and how are climate conference hosts decided?

The long-term strategy paper says there were various estimates of finance needed for India’s transition to a low-carbon economy compatible with a 2070 net-zero status. These vary widely and are not comparable, but “are in all cases substantial and of the order of tens of trillions of dollars by 2050”, it says.

Meeting such huge need for resources “is a challenge”, the document acknowledges, and says the money would have to come from domestic and international sources, both in the public and private sector. In this context, the document lamented the lack of adequate climate finance from the developed countries, as is mandated by the Paris Agreement.

“As of 2020, the OECD report claims that developed countries have mobilised and provided 83.3 billion USD in climate finance… towards meeting the commitment to mobilise 100 billion USD… by 2020. However, only 68.3 billion USD… was in the form of public finance. (Also), the OECD figure has been challenged by other independent agencies like Oxfam. The Oxfam report claims that the actual value of public climate assistance provided to developing countries by OECD is only one-third of the claimed amount, that is around 21-24.5 billion USD,” the document says.

It says India would separately need large sums of money for adaptation as well, even though it was “substantially more challenging to quantify”.

“In its NDC (nationally-determined contributions) in 2015, India had put forward a preliminary estimate that it would need around 206 billion USD (at 2014-15 prices) between 2015 and 2030 for implementing adaptation actions in agriculture, forestry, fisheries, infrastructure, water resources and ecosystems. A more recent analysis by a sub-committee of India’s Ministry of Finance has estimated that the cumulative total expenditure for adapting to climate change in India would amount to INR 85.6 trillion (at 2011-12 prices, about 2 trillion USD now) by the year 2030,” it says.

Curiously, the document does not mention mobilisation of finance through a domestic carbon market, which the government is in the process of setting up.

“The LTS could have included carbon pricing through a domestic emissions trading scheme as a key element of India’s strategy, given that the government has already announced the creation of the same in India,” Vaibhav Chaturvedi of Council on Energy, Environment and Water, said.