COP26: Time runs out, issues unresolved, no agreement yet

Several issues that were supposed to be wrapped up here, including those related to finance and rules for the establishment of a new carbon market, remain unresolved. 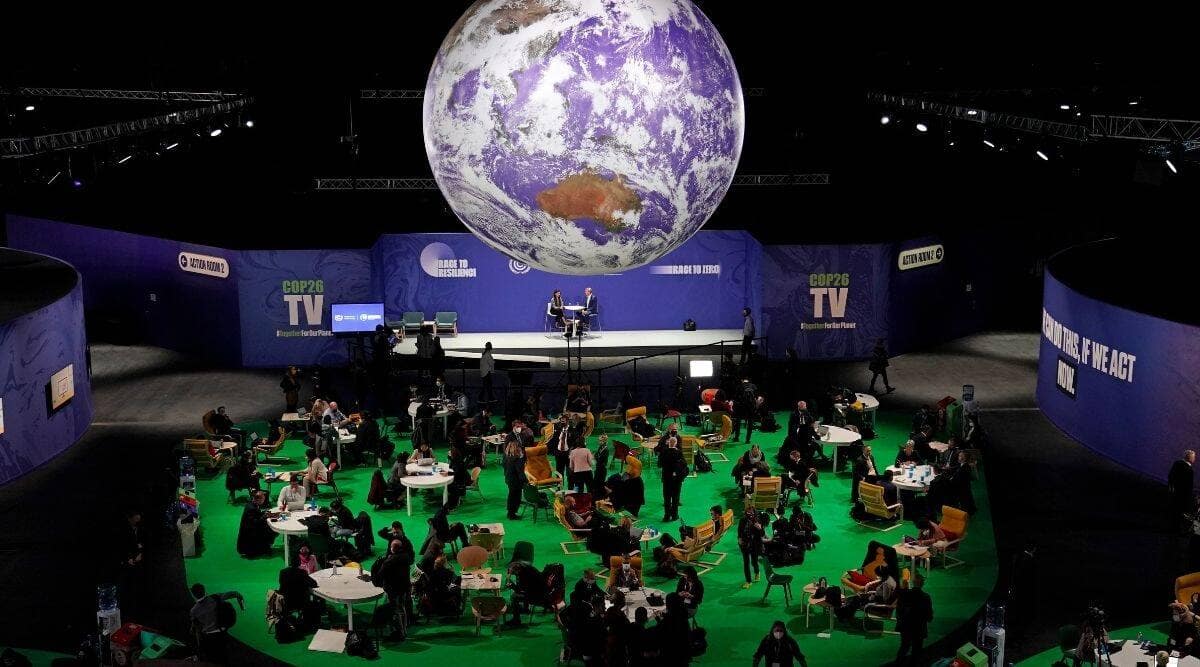 Delegates gather inside the venue at the COP26 U.N. Climate Summit in Glasgow, Scotland. (AP)

THE COP26 meeting in Glasgow had an unusually productive start, with several countries, including India, promising new climate actions to strengthen the global fight against climate change. The ending, however, was likely to happen in a familiar fashion.

As has happened with most of the earlier climate change conferences, the 26th session of Conference of Parties to the UN Framework Convention on Climate Change, or COP26 for short, was unable to deliver an agreement on time, and negotiations were set to spill over to Saturday.

Several issues that were supposed to be wrapped up here, including those related to finance and rules for the establishment of a new carbon market, remain unresolved, and the excitement generated by the big-ticket announcements of the first week are likely to get dampened by the weak agreement that is set to come out now. There isn’t enough time to wrap up the discussions on all the pending issues, and it is possible that some of them may be kicked to the next year’s meeting.

COP26 was billed as the meeting that would give the world a meaningful chance to hold the rise in global temperatures within 1.5 degree Celsius from the pre-industrial times, against the 2 degree Celsius that is the main goal of the Paris Agreement. Assessments of the climate actions being taken by the countries suggest that the world, in fact, was headed towards a 2.7 degree Celsius temperature rise by the end of the century. COP26 was supposed to deliver an agreement that would have spurred stronger action from countries in a bid to put the world towards a 1.5 degree pathway.

That seems like a tall ask now, as familiar issues like availability of climate finance, continuing to remain intractable.

“We need to deliver a strong message regarding our collective resolve for accelerated mitigation and adaptation actions to combat climate change in this decade. This message will have credibility only if accompanied by an equally strong resolve of developed country parties to mobilise and provide enhanced climate finance to developing country parties,” India’s lead negotiator Richa Sharma, an additional secretary in the Environment Ministry, said at one of the meetings on Friday. “We express our disappointment at the lack of significant progress in climate finance related agenda items,” she said.

Opinion |What India must do to follow through on COP26 commitments

On the last official day of the conference on Friday, negotiators were able to produce a new draft agreement, the second so far, which was considered an improvement on the previous one but not good enough.

In fact, unhappy with the weak outcomes being proposed, civil society groups, which form a strong community of participants at the COPs, held a parallel ‘people’s plenary’ at the venue, and then organised a march outside to press for stronger agreement.

The new drafts were not drastically different from the first one, but many of the seemingly small changes in language, or emphasis, have consequences and legal implications, and represented hours of negotiations. For example, while the first text noted “with regret” the failure of the developed countries to deliver on the promised US$ 100 billion by 2020, the latest one has noted it “with deep regret”.

A group of developing countries, which included India and China, had expressed dissatisfaction with the first draft, especially the section relating to mitigation of greenhouse gas emissions, and had demanded that it be overhauled completely. The new draft, however, is not very different from the earlier one, though the principle of common and differentiated responsibility (CBDR), which recognises that developing countries have a relatively minor burden in the fight against climate change, has been accorded greater emphasis.

Crucially, a mention on phase-out of coal and fossil fuels has survived, though an important qualification has been added, apparently on the insistence of countries which still depend on coal power plants for generating electricity. This is the first time in over 20 years that coal or fossil-fuels usage has found a mention in any document or decision of the climate change meetings, and was being considered a significant forward movement. The first draft called upon the countries to “accelerate the phase-out of coal and subsidies for fossil fuels”. In the second draft released on Friday morning, this has been tweaked to a call for accelerating the phase-out of “unabated coal power” and “insufficient subsidies” on fossil fuels.

The second draft also retains the call for doubling of finance for adaptation, an important demand of the developing countries which have been lamenting the extremely inadequate availability of money for adaptation. It has also been made more specific. Developed countries are being asked to double climate finance from present levels by the year 2025. The specifics were missing in the earlier draft.