Over 100 countries came together to make a potentially game-changing pledge to cut methane emissions by at least 30 per cent by 2030. Another set of 100 countries promised to halt and reverse deforestation by 2030. 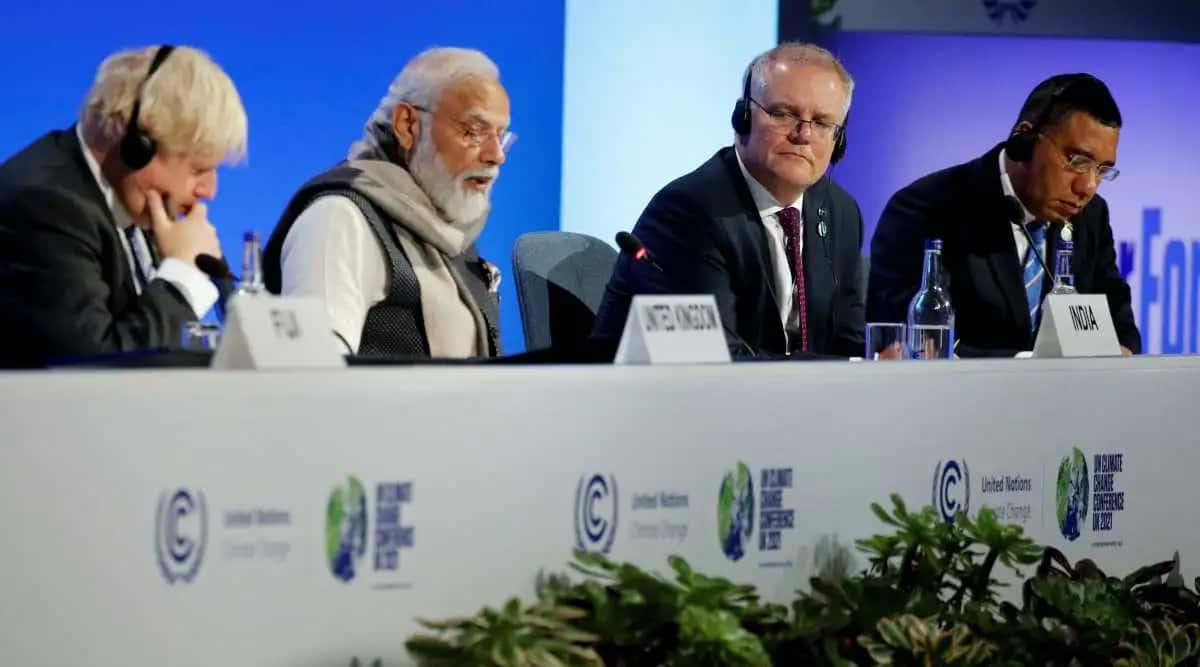 The conference kicked off with several countries announcing stronger climate change action. This included India which unveiled a new five-point plan that was a significant upgrade from its existing promises. (AP/PTI)

In an assessment of the major new climate promises during the first three days of the Glasgow conference, the International Energy Agency (IEA) has said that the promises, if fulfilled, could hold the global rise in temperatures to within 1.8 degrees Celsius since pre-industrial times.

This is a significant improvement but as the first week of the conference drew to a close, NGOs and civil society organisations were complaining about the lack of any progress in the negotiations, particularly on difficult issues like finance.

The conference kicked off with several countries announcing stronger climate change action. This included India which unveiled a new five-point plan that was a significant upgrade from its existing promises.

Read |COP26 protesters back an array of causes, connected by climate change

Over 100 countries came together to make a potentially game-changing pledge to cut methane emissions by at least 30 per cent by 2030. Another set of 100 countries promised to halt and reverse deforestation by 2030.

In a blog post, IEA Executive Director Fatih Birol said these would be enough to keep the global rise in temperature to 1.8 degrees Celsius, a substantive improvement over predictions based on earlier promises.

“Ahead of COP26, WEO-2021 (World Energy Outlook, IEA’s flagship publication) showed that even if all announced pledges were implemented in full and on time, the world would be headed for 2.1 degrees Celsius of warming by the end of the century… Since mid-October, however, more countries have been raising their ambitions. Indian Prime Minister Narendra Modi strengthened the country’s 2030 targets, and pledged to hit net zero emissions by 2070. Several other large economies have also announced pledges to reach net zero emissions… Our updated analysis of these new targets, on top of all of those made previously, shows that if they are met in full and on time, they would be enough to hold the rise in global temperatures to 1.8 degrees Celsius by the end of the century,” Birol said.

“This is a landmark moment: it is the first time that governments have come forward with targets of sufficient ambition to hold global warming to below two degree Celsius,” he said.

According to the official assessment by UN Climate, the existing action plans of the countries would allow global temperatures to rise until at least 2.7 degrees Celsius from pre-industrial times by the end of this century. A new assessment incorporating the recent enhanced promises is yet to be made.

Not everyone was optimistic, though.

“The announcements made on the first few days, including those by India, are very welcome. But until these announcements become part of an official document and get incorporated into the COP (short for Conference of Parties, the official name for these climate conferences) process, they have little value,” said Harjeet Singh, Senior Advisor at the Climate Action Network International, a group of over 1500 NGOs in 130 countries.

Singh, a veteran of these climate meetings, said coalitions like the one on deforestation aren’t new. “Such coalitions do have their utility. But anything that is not part of the official COP process gets very difficult to monitor, and their success is unsure,” he said, underlining what he called was a disconnect.

“The progress on the COP-26 negotiations tells a very different story. Outside, there is talk about trillions of dollars being mobilized for climate action, but inside the negotiations, there is a huge resistance to even clearly define what climate finance means. A vague definition of climate finance will allow rich nations to fudge numbers and evade responsibility,” he said.

Singh isn’t the only one concerned at the lack of meaningful progress in the negotiations.

“There is a danger that this is becoming a negotiation-free climate negotiations,” said Teresa Anderson, Climate Policy Advisor at ActionAid International. “In week two, the focus must come back to the negotiations, building trust and the cooperation needed to limit warming to 1.5 degrees Celsius, and deliver on finance to protect frontline communities”.

COP President Alok Sharma, a minister in Boris Johnson’s cabinet, admitted that most of the contentious issues remained unresolved in the negotiations, and that these would now be referred to the ministerial meetings which begin Monday.

“This includes the discussions on finance. I hope we will be able to make progress on these next week,” Sharma said Saturday.

Asked how many Covid cases were detected at the conference, Sharma declined to give an answer other than saying: “There are no current reasons to be concerned.”

Availability of climate finance has been one of the most contentious issues. Developed nations are under an obligation to provide money to developing countries to help them fight climate change — India has reinforced this saying developed countries can’t get a free pass.

Under the Paris Agreement, the rich and developed countries are supposed to deliver at least $100 billion every year from 2020 towards this purpose. This money is still to be made available, and just ahead of the Glasgow meeting, developed countries pushed the deadline back by at least three years.

The Paris Agreement also asks these countries to ensure that they begin to raise an amount higher than $100 billion per year from the year 2025.