How China’s police used phones and faces to track protesters

As authorities seek to track, intimidate and detain those who marched in defiance of the government’s strict COVID policies last weekend, they are turning to powerful tools of surveillance the state has spent the past decade building for moments like this, when parts of the population turn out and question the authority of the ruling Chinese Communist Party 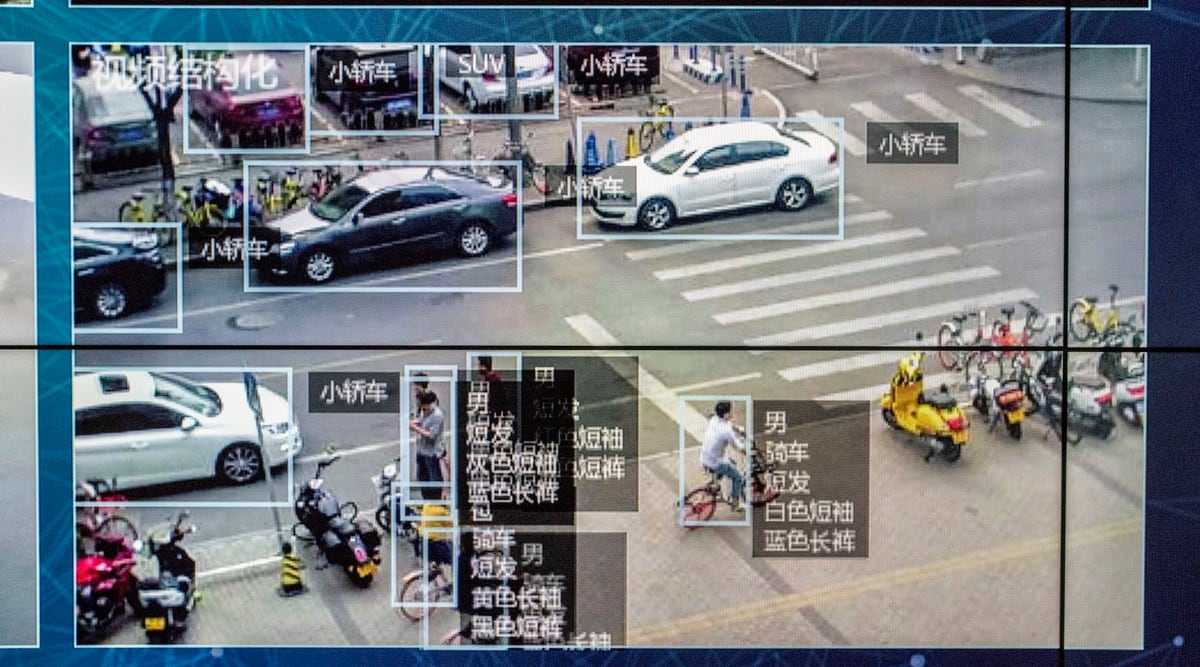 A monitor displays video showing identification software in use at a Beijing showroom on May 10, 2018. The software allowed identification of pedestrians by gender, type of hair, clothes, etc. Types of cars driving by were also identified. (Gilles Sabri/The New York Times)

On Sunday, when Zhang went to protest China’s strict COVID policies in Beijing, he thought he came prepared to go undetected.

He wore a balaclava and goggles to cover his face. When it seemed that plainclothes police officers were following him, he ducked into the bushes and changed into a new jacket. He lost his tail. That night, when Zhang, who is in his 20s, returned home without being arrested, he thought he was in the clear.

But the police called the next day. They knew he had been out because they were able to detect that his phone had been in the area of the protests, they told him. Twenty minutes later, even though he had not told them where he lived, three officers knocked at his door.

Similar stories are being told by protesters across China this week, according to interviews with those targeted and human rights groups following cases. As authorities seek to track, intimidate and detain those who marched in defiance of the government’s strict COVID policies last weekend, they are turning to powerful tools of surveillance the state has spent the past decade building for moments like this, when parts of the population turn out and question the authority of the ruling Chinese Communist Party.

Also read |China Protests: The party-state can’t be underestimated — neither can the Chinese people

Police have used faces, phones and informants to identify those who attended protests. Usually they force those they track down to pledge not to protest again. Often inexperienced with being tracked, protesters expressed bafflement at how they were found out. Out of fear of further repercussions, many have deleted foreign apps like Telegram that have been used to coordinate and spread images of the protests overseas.

Chinese police have assembled one of the world’s most sophisticated surveillance systems. They have hung cameras by the millions on street corners and at the entrances to buildings. They have bought powerful facial recognition software and programmed it to identify local citizens who live nearby. Special software crunches the data and images that are scooped up.

Although the construction of the surveillance system was no secret, to many in China it has felt remote. Police more commonly use it to track dissidents, ethnic minorities and migrant workers. Many express support for it under the idea that if you’ve done nothing wrong, you have nothing to hide. The interrogations of the last week may shake that outlook. It marks the first time the surveillance state has been directed squarely at large numbers of middle-class people in China’s most affluent cities. While many have experience with censorship — and this week proved they can sometimes get around it — a police visit at home is less common, and more intimidating.

Also read |Why are protesters in China holding white pieces of paper as an act of defiance?

“We’re hearing stories of police turning up on people’s doorsteps asking them their whereabouts during the protests, and this appears to be based on the evidence gathered through mass surveillance,” said Alkan Akad, a China researcher at Amnesty International. “China’s ‘Big Brother’ technology is never switched off, and the government hopes it will now show its effectiveness in snuffing out unrest,” he added.

The marches and protests have been some of the most widespread and openly political since those of 1989, which Beijing put down with lethal military force at Tiananmen Square. Now Chinese authorities can smother unrest by using the high-tech dragnet to target organizers and the most outspoken malcontents and detain them. Followers and onlookers often get away with a stern threat.

Zhang’s experience is a common one. Although he knew about the facial recognition cameras that clutter China’s public spaces, he underestimated the phone trackers. Tiny boxes with antennas, the devices are much easier to miss. Mimicking a cell tower, they connect to the phones of all who pass by, and record the data for the police to check. Still, Zhang, who, like other protesters interviewed for this article declined to give his full name out of fear of police reprisal, was lucky. After a harsh interrogation and a warning not to attend a protest again, the police left his apartment.

He said the ordeal had left him “terrified,” and he believed it would be effective at curbing the momentum the gatherings had generated. “It’s going to be very difficult to mobilize people again,” he said. “At this point, people are going to get off the streets.”

For others, it was their face that gave them away. One man, Wang, who joined the protests in Beijing, said he received a warning call from police two days after the Sunday gathering. He was told that he had been identified with facial recognition technologies.

Unlike other Beijing protesters, Wang did not cover his face with a hat or sunglasses, and he took off his medical mask at one point during the event. He said he wasn’t surprised police had been able to identify him, but the use of such technology made him feel uneasy. “I knew the risks of going to such a gathering,” he said. “If they want to find us, they can definitely succeed.”

The phone call from police lasted only 10 minutes, but the officer did his best to intimidate him: “He stated clearly that there was no second chance.”

After being arrested or approached by police, many protesters have shied away from using VPNs (virtual private networks) or other foreign apps like Telegram and Signal. The fear, they said, is that now that they are on the authorities’ radar, the software they use on their phones might be more closely monitored, leading to more police attention and possible detention.

One man, who was arrested Monday during a protest in Chengdu in central China, said his phone was checked while he was being held by the police, who saw that he had Telegram and other foreign apps. He deleted the apps when he was released.

Some protesters have tried to fight back against the surveillance, using tactics similar to those used in Hong Kong in 2019, when demonstrators attempted to reveal the identities of police officers, just as the police worked to unmask them. This week a list of the identities of about 60,000 Shanghai police officers was distributed in some Telegram groups. The spreadsheet of names originated from a leak of Chinese Communist Party members in 2020, according to cybersecurity group Internet 2.0, which researched the original leak. The Times confirmed the accuracy of a part of the data, which included officers’ national identity numbers, addresses, marriage status, ethnicity and height.

For many protesters, the shock of being identified has worked as an intimidation tactic all its own.

A woman named Wang, a filmmaker in her 20s, said she joined a group of friends in Beijing on Sunday night. Together they took precautions: They covered their faces with medical masks, took a taxi several kilometers away and walked to the site of a vigil. Even though they had been warned to turn off their phones, they instead just disabled the GPS and Face ID features.

“We thought at the time, there were so many people. Just think about it, how could they be able to find every one? How could they have the energy to catch every one?” she said.

She and her friends were startled when a number of them received phone calls or visits from police. Some were forced to assist police with their investigation by going to the station.

“I think my friends, if there’s a next time, they will not dare go,” she said.

Still, Wang slipped through the cracks of the dragnet. That night she used a phone with a number that was not linked to systems that could identify her, like the country’s health code software used to track COVID cases and ensure that people regularly get tested in outbreak areas.

She was undaunted by her experience.

“I’ll still go; if the police find me, we’ll see,” she said. When asked about whether she would attend a public gathering again, she added, “I just feel you have to go.”

Navy will be Aatmanirbhar by 2047, aim is to find made-in-India solutions for security requirements: Navy Chief