The security law may change the demographics of Hong Kong. Members of the Disciplined Services march in front of a banner promoting the new national security law during a flag-raising ceremony to mark the 23rd anniversary of Hong Kong’s return to Chinese rule in Hong Kong on July 1. (Bloomberg)

When China passed its new Hong Kong security law on June 30, officials said it would only affect “extremely few criminals.” Less than two weeks later, it’s clear Beijing is trying to wipe away signs of the city’s protest movement from the streets.

The law uses vague language to ban subversion, secession, terrorism and collusion with foreign forces, with sentences as long as life in prison. The government has since issued statements that threaten to outlaw a range of political activity and give police broad surveillance powers that are spooking tech companies, banks, democracy activists and expats — some of whom are wondering whether they’ll even stay.

“The law has had an immediate, and deep, impact on the city,” said Antony Dapiran, a Hong Kong-based lawyer and author of “City on Fire: The Fight for Hong Kong.” “Many ordinary activities that were perfectly legal before — chanting political slogans or waving banners, borrowing political books from libraries, school students being politically engaged — have overnight become forbidden. Even at a visual level the streetscape has changed.”

Here’s how the law is already altering how Hong Kong looks on the ground: 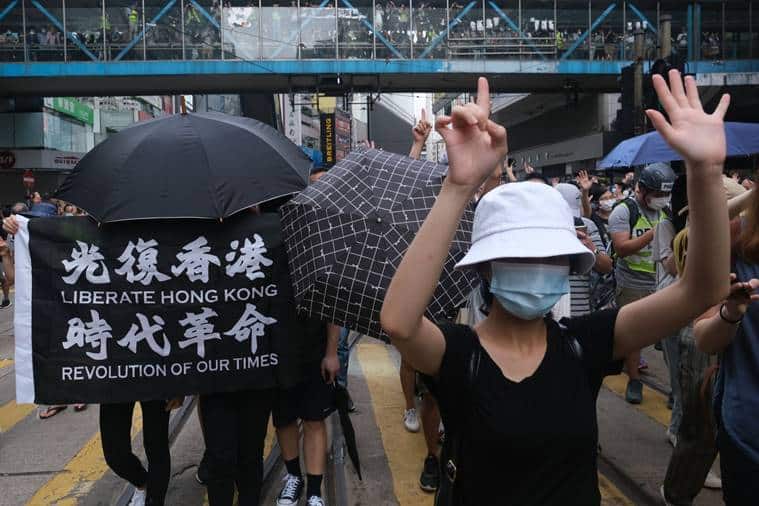 A demonstrator gestures the “Five demands, not one less” protest motto as others hold a flag reading “Liberate Hong Kong, Revolution of Our Times” during a protest in Hong Kong on July 1. (Bloomberg)

A major rallying cry chanted and sung by hundreds of thousands of protesters during the city’s months-long pro-democracy movement — “Liberate Hong Kong! Revolution of our time!” — is now considered illegal. Other slogans have also been deemed a threat to national security, including “Hong Kongers, build a nation.”

On the July 1 anniversary of the city’s handover to Chinese rule, less than 24 hours after the law’s enactment, protesters arrested included a man holding a Hong Kong independence flag and a woman displaying a sign reading “Hong Kong Independence.” New rules also ban flags advocating the independence of Tibet, Taiwan and East Turkestan.

“Beijing probably wants Hong Kongers to start to learn how to live our lives legally,” said Claudia Mo, an opposition politician who’s been active in the protest movement. “The idea seems to introduce an eerie, insecure atmosphere, and fear of uncertainty could serve as a perennial reminder for obedience.”

“They don’t define what can’t be done exactly, and that’s the scariest to shop owners,” said one of the restaurant owners with the surname Hung. His shop has displayed protest material since since August, but he took it down after July 1: “We have to keep wondering what will violate the law.”

Some of the multi-colored Lennon Walls — made up of bright sprays of Post-it notes — that popped up all over town during the protests have also come down, though it’s unclear who removed them and why. 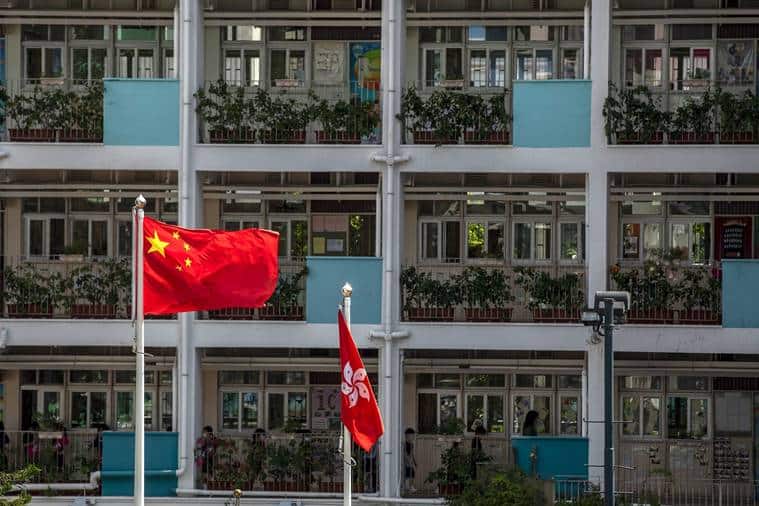 The flags of China, left, and Hong Kong are flown in a school in Hong Kong on June 29. (Bloomberg)

Hong Kong students — thousands of whom participated in the demonstrations — are now prohibited from political activity in schools, including singing, boycotting classes and forming human chains outside their schools.

“Schools must not allow their students to play, sing or broadcast any songs which will disrupt the normal operation of schools, affect students’ emotions or contain political messages,” Education Secretary Kevin Yeung said in a directive. He cited the popular protest anthem “Glory to Hong Kong,” which is regularly sung at rallies across the city.

…And Only Use ‘Appropriate’ Books

The Education Bureau is also reviewing the curriculum to make sure textbooks don’t lead students astray. Books and materials “should be appropriate and of high quality,” the bureau said.

“Whether or not there is a national security law, the reading materials provided by schools to students should not involve any acts that endanger national security,” it said. Although it said the aim wasn’t to infringe on free speech and schools will be the ultimate gatekeeper, the bureau planned to follow up in a “serious manner” if there were “any issues.” A demonstrator holds a British National (Overseas) passport as another waves a colonial-era Hong Kong flag during a lunchtime protest in Hong Kong, China, on Friday, May 29. (Bloomberg)

The public library system is reviewing a number of political books that may now fall afoul of the new security law. That reportedly includes books by noted activist Joshua Wong and pro-democracy politician Tanya Chan.

The library “will review whether certain books violate the stipulations of the National Security Law,” the Leisure and Cultural Services Department, which oversees the Hong Kong Public Libraries, said in a statement. “While legal advice will be sought in the process of the review, the books will not be available for borrowing and reference in libraries.”

In the days before and after the law passed, a number of Hong Kong citizens scrubbed or took down Twitter and Facebook accounts. U.S. Secretary of State Michael Pompeo slammed the ruling Communist Party of Chinese leader Xi Jinping for “Orwellian censorship” in Hong Kong.

Wong and other prominent activists cut ties with political groups after the law’s enactment, an apparent bid to avoid implicating each other. As Wong withdrew from Demosisto, a party he founded, he said he would continue his activism in a personal capacity. Other well-known founding members and activists — Nathan Law, Agnes Chow and Washington-based Jeffrey Ngo — announced their departure as well.

While it’s unclear right now exactly how the government will respond to non-compliance, the moves have prompted businesses to worry about some form of the mainland’s Great Firewall now coming to Hong Kong.

“There’s a new scenario called ‘Exceptional Circumstances,’ which has not been defined, which really allows police to basically raid and seize any types of materials,” Sharron Fast, a lecturer in media law at the University of Hong Kong, told Bloomberg Television. She said police could now force companies to take down content that only needed to be considered “potentially unlawful.”

The security law may change the demographics of Hong Kong. The U.K. has offered a path to citizenship for some 3 million Hong Kong British National Overseas passport holders, while Australia suspended its extradition agreement with the city and offered skilled migrants a five-year visa. Some members of the expat population, which numbers in the hundreds of thousands, are also mulling an exit after a year that saw protests, a pandemic and the new law.

“The government has on the one hand sought to reassure people that the law targets only a small minority, but on the other hand taken actions to target wide ranges of what has previously been acceptable behavior,” said Dapiran, the lawyer. “As a result, the uncertainty and fear is pervasive.”