The outbreak comes at an inopportune time for Apple and Foxconn, a major manufacturer for Apple, which is now making the new iPhone 14. 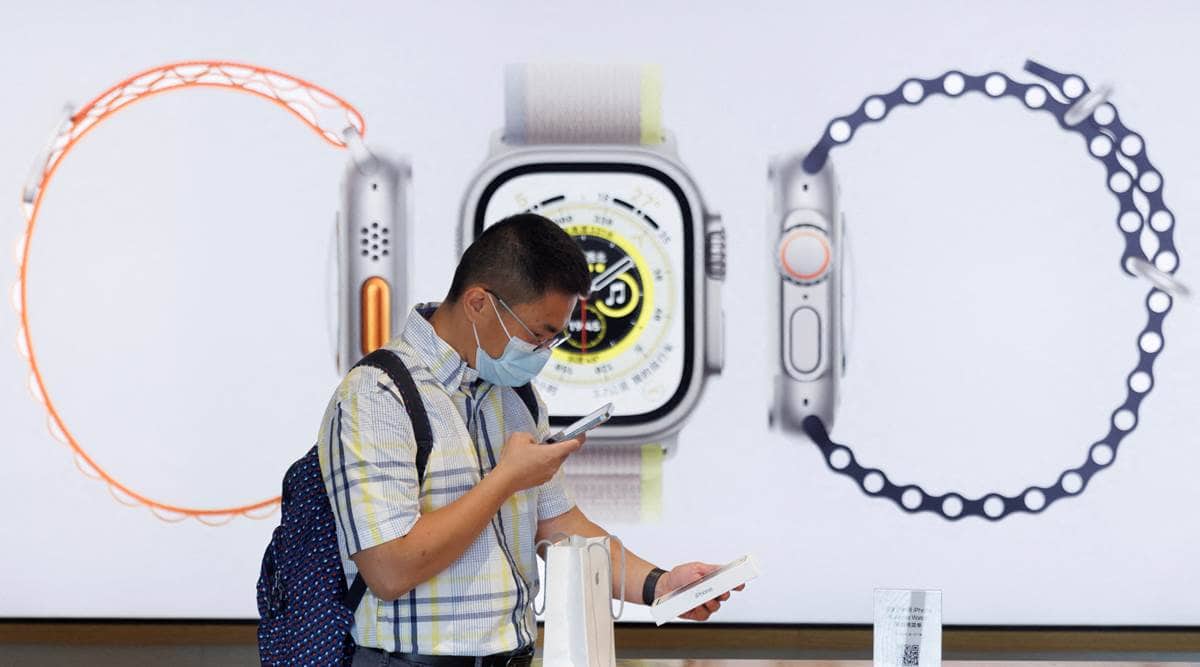 A man takes a picture of an iPhone in an Apple store as Apple Inc's new iPhone 14 models go on sale in Beijing, China. (Photo: Reuters)

A COVID-19 outbreak at the largest iPhone manufacturing plant in Zhengzhou, China, has forced some factory workers into quarantine, part of a citywide outbreak that has also prompted shops and hotels near the factory to close.

Foxconn, a major manufacturer for Apple, confirmed in a statement to The New York Times on Thursday that a “small number of employees” had been asked to quarantine but declined to comment on details of the outbreak.

Foxconn, with headquarters in Taiwan, said efforts to control the outbreak were “progressing steadily” and that the quarantined employees were being provided with what they needed, including “material supplies, psychological comfort and responsive feedback.”

The outbreak comes at an inopportune time for Apple and Foxconn, which is now making the new iPhone 14. Foxconn said that production and operations were “relatively stable” and that output estimates for the three-month period from October to December would “remain unchanged.”

This part of the year is typically a critical period for iPhones. Last year, roughly one-third of the $192 billion in iPhone sales was generated in the holiday period alone, according to Apple. The phone helped increase total revenue by 8% in the latest quarter, the company reported Thursday.

Called “iPhone City” by locals, Zhengzhou is a city of 6 million people in inland China. It is a central artery in Apple’s production of the iPhone, producing roughly half of Apple’s global supply, according to Ming-Chi Kuo, an analyst at TF International Securities, a financial services group.

“What happens if this hits other Chinese cities where Apple has supply chains?” he said. “It’s definitely something that Apple needs to consider in the mid- to long term.”

Apple has moved production of some of its next-generation iPhones to India, a shift in response to growing awareness of heightened risks caused by concentrating manufacturing in a single country.

The Zhengzhou city government said neighborhoods in several of the city’s 12 districts are under some form of restrictions.

Those restrictions were imposed against the backdrop of last week’s Communist Party congress that extended Xi Jinping’s leadership for a precedent-defying third term. Under Xi’s direction, China has stuck with a zero-tolerance approach to the pandemic — marked by mass testing, severe lockdowns and quarantines — that has shut down entire cities because of a handful of cases. Some people have had trouble securing food, and some have been confined for weeks in poorly built isolation facilities.

Gao Mingjun, 24, a Zhengzhou resident, said her mother and aunt have been quarantined in their dormitories in the Foxconn Zhengzhou factory for weeks.

“I haven’t seen my Mom for more than a month,” she said, adding, “There are basically no advantages, but all are flaws,” with the pandemic restrictions.

Although financial markets have signaled unease with China’s economic slowdown, local governments have hewed closely to Xi’s playbook. At his opening address at the congress, Xi reiterated his commitment to China’s pandemic policy, describing the fight against COVID-19 as an “all-out war.”

Several other cities have been battling outbreaks in recent weeks, including Wuhan, where the virus first appeared; Lanzhou, in Gansu province; and Xining in the northwestern province of Qinghai. The latest viral wave, which reached 993 cases Thursday, followed earlier outbreaks at the start of October in western Xinjiang and southern Hainan, among other places, when daily cases reached 1,400.

The lockdown in Zhengzhou began early last week when people in more than a dozen neighborhoods in the central Zhongyuan district, west of the Foxconn factory, were told to stay at home, according to an official notice. By Tuesday, images and videos of an outbreak inside Foxconn erupted on social media, sparking outrage from Chinese internet users who accused the company of failing to be transparent and downplaying the situation. The hashtag #ZhengzhouFoxconn briefly trended on Weibo, a popular social media platform in China.

But some online commenters were relieved that the news had finally emerged. Posts revealed shortages of food and other necessities inside workers’ dormitories.