The International Atomic Energy Agency said it is following the situation in Ukraine "with grave concern" and appealed for maximum restraint to avoid any action that may put Ukraine's nuclear facilities at risk. 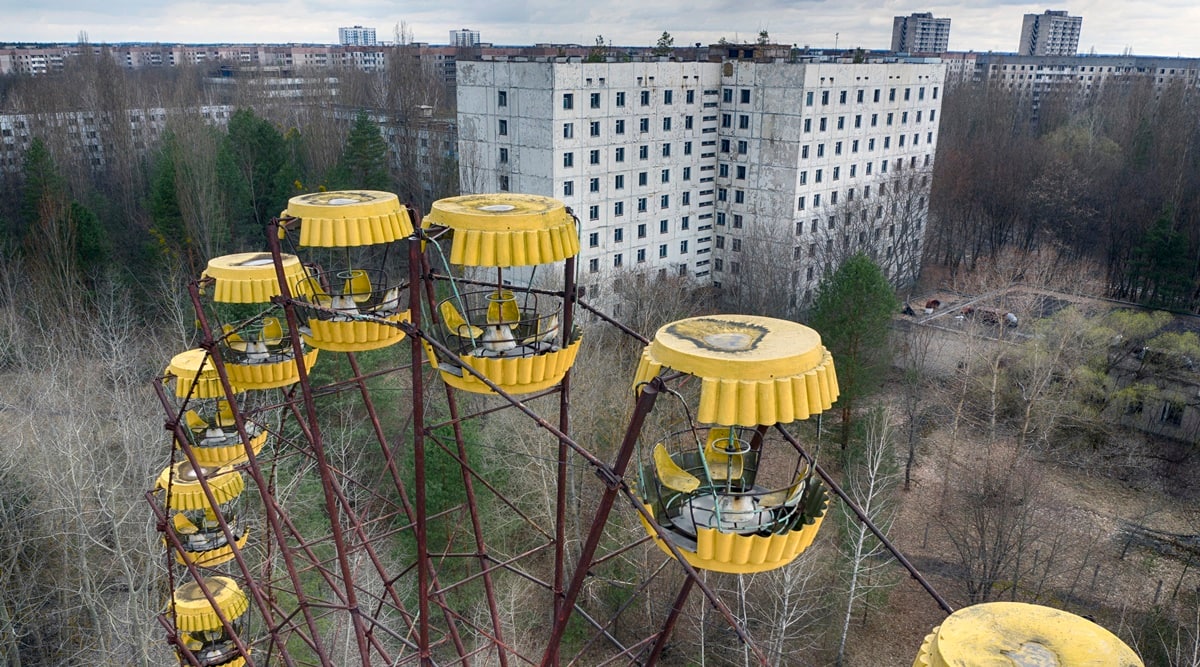 An abandoned Ferris wheel stands in the park in the ghost town of Pripyat, Ukraine, close to the Chernobyl nuclear plant, on April 15, 2021. (AP, File)

It was among the most worrying developments on an already shocking day, as Russia invaded Ukraine Thursday: warfare at the Chernobyl nuclear plant, where radioactivity is still leaking from history’s worst nuclear disaster 36 years ago.

Russian forces took control over the site after a fierce battle with Ukrainian national guards protecting the decommissioned plant, Ukrainian presidential adviser Mykhailo Podolyak told The Associated Press. The condition of the plant’s facilities, a confinement shelter and a repository for nuclear waste is unknown, he said.

An official familiar with current assessments said Russian shelling hit a radioactive waste repository at Chernobyl, and an increase in radiation levels was reported. The increase could not be immediately corroborated.

A senior American intelligence official said the US believes Russian forces at Chernobyl were aiming to push to Kyiv, about 130 km south of the plant, to try to link with other Russian forces throughout Ukraine. The officials were not authorised to be publicly named discussing the sensitive matter.

The Chernobyl Exclusion Zone, a 2,600-square-km zone of forest surrounding the shuttered plant, lies between the Belarus-Ukraine border and the Ukrainian capital.

Ukrainian President Volodymyr Zelenskyy said Ukrainian officers fought to defend it, “so that the tragedy of 1986 will not be repeated.” He called it a “declaration of war against the whole of Europe.”

Adviser Podolyak said that after an “absolutely senseless attack … it is impossible to say that the Chernobyl nuclear power plant is safe.” He warned that Russian authorities could blame Ukraine for damage to the site or stage provocations from there.

Ukrainian Interior Ministry adviser Anton Herashenko warned that any attack on the waste repository could send radioactive dust over “the territory of Ukraine, Belarus and countries of the EU.”

Russian officials, who have revealed little of their operations in Ukraine and not revealed their goals, did not publicly comment on the battle.

The International Atomic Energy Agency said it is following the situation in Ukraine “with grave concern” and appealed for maximum restraint to avoid any action that may put Ukraine’s nuclear facilities at risk.

Rafael Mariano Grossi, the IAEA’s general director, said Ukraine has informed the Vienna-based agency that “unidentified armed forces” have taken control of all facilities at the plant and that there had been no casualties or destruction at the industrial site. Grossi said it is “of vital importance that the safe and secure operations of the nuclear facilities in that zone should not be affected or disrupted in any way.”

Edwin Lyman, director of nuclear power safety at the Union of Concerned Scientists in Washington, said, “I can’t imagine how it would be in Russia’s interest to allow any facilities at Chernobyl to be damaged.”

In an interview, Lyman said he is most worried about spent fuel stored at the site, which has not been active since 2000. If the power to cooling pumps is disrupted or fuel-storage tanks are damaged, the results could be catastrophic, he said.

Reactor No. 4 at the power plant exploded and caught fire deep in the night on April 26, 1986, shattering the building and spewing radioactive material high into the sky.

Soviet authorities made the catastrophe even worse by failing to tell the public what had happened, angering European governments and the Soviet people. The 2 million residents of Kyiv weren’t informed despite the fallout danger, and the world learned of the disaster only after heightened radiation was detected in Sweden.

The building containing the exploded reactor was covered in 2017 by an enormous shelter aimed at containing radiation still leaking from the accident. Robots inside the shelter work to dismantle the destroyed reactor and gather up the radioactive waste.

It’s expected to take until 2064 to finish dismantling the reactors. Ukraine decided to use the deserted zone as the site for its centralised storage facility for spent fuel from the country’s other remaining nuclear power plants.

Germany’s vice chancellor and economy minister, Robert Habeck, told The Associated Press that Russia would not need to obtain nuclear material from Chernobyl if it wanted to use it for any purpose, because it has enough such material of its own.