Joe Biden warned that Trump's false claims that the election was stolen from him through widespread voting fraud could unravel the rule of law and undermine future elections. 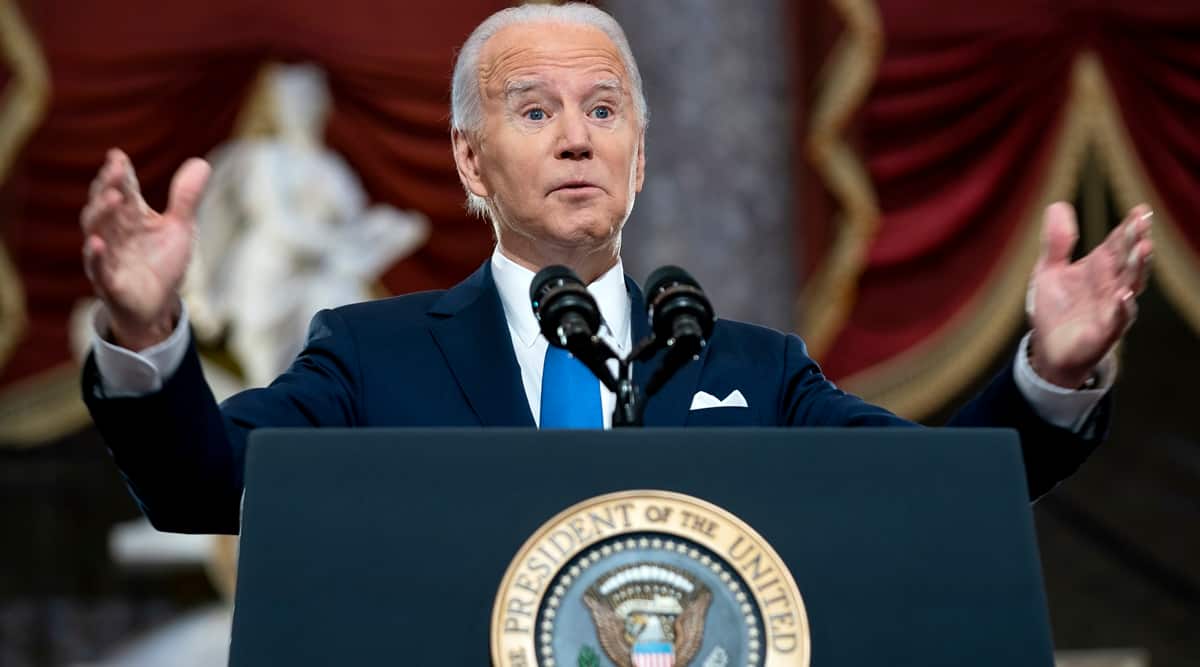 President Joe Biden speaks from Statuary Hall at the US Capitol to mark the one year anniversary of the Jan. 6 riot at the US Capitol by supporters loyal to then-President Donald Trump, Thursday, Jan. 6, 2022, in Washington. (AP)

President Joe Biden on Thursday accused his predecessor Donald Trump of posing a continuing threat to American democracy in a speech on the anniversary of the deadly US Capitol attack by Trump supporters who tried to overturn his 2020 election defeat.

Speaking at the white-domed building that was the scene of the Jan. 6, 2021, riot, Biden warned that Trump’s false claims that the election was stolen from him through widespread voting fraud could unravel the rule of law and undermine future elections.

“We must be absolutely clear about what is true and what is a lie. Here’s the truth: A former president of the United States of America has created and spread a web of lies about the 2020 election. He’s done so because he values power over principle,” Biden said.

The speech was a departure for Biden, who has spent most of his first year in office focused on pursuing his own agenda rather than looking backward.

But Democrats, a handful of Republicans and many independent observers have warned that the damage Trump did before the riot – in an incendiary speech to supporters in which he repeated his false election claims and exhorted them to go to the Capitol and “fight like hell” to “stop the steal” – lingers on. “One year ago today in this sacred place, democracy was attacked. Simply attacked,” Biden said. “The will of the people was under assault. The Constitution, our Constitution, faced the gravest of threats.”

Biden added that “for the first time in our history a president had not just lost the election he tried to prevent the peaceful transfer of power.” Biden condemned Trump for watching the riot on television “and doing nothing for hours.”

According to Reuters/Ipsos polling, some 55% of Republican voters believe Trump’s false claim, which was rejected by dozens of courts, state election departments and members of Trump’s own administration.

Four people died in the hours-long chaos, while one police officer died the day after battling rioters and four later died by suicide. Around 140 police officers were injured. 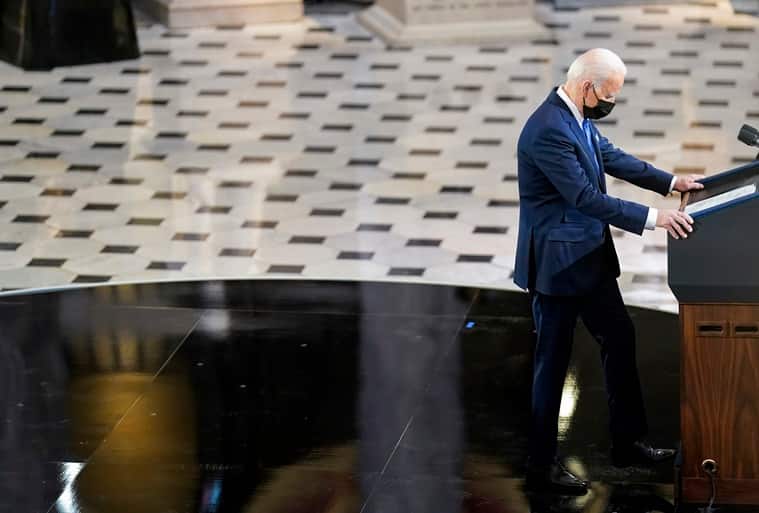 President Joe Biden at the US Capitol to mark the one year anniversary of the Jan. 6 riot. (AP)

One of the officers at the scene, Sergeant Harry Dunn of the Capitol Police, said the attack took an emotional toll.

“You cannot get away from Jan. 6 even if you’re trying to. It’s everywhere, especially if it’s your place of work,” Dunn said in a phone interview. “Accountability needs to be had, no matter who that comes at.”

Biden’s remarks will begin a day-long series of events that will also feature House of Representatives Speaker Nancy Pelosi and other legislative leaders, mostly from Biden’s Democratic Party. They will highlight the lingering damage from the worst attack on the Capitol since the War of 1812. 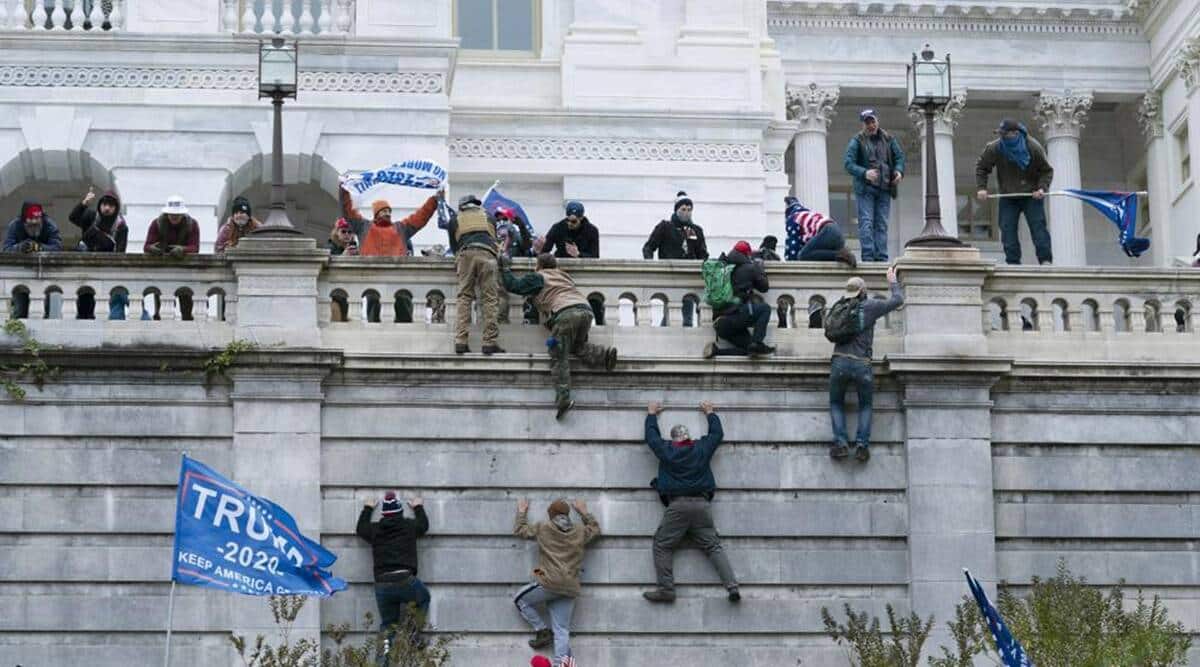 “Your ideology doesn’t have to be the same as ours. We can disagree respectfully, but we cannot follow a big lie,” he said on CBS.

The House will not be in session and many Senate Republicans will be out of state attending the funeral of former Republican Senator Johnny Isakson.

Some observers say they worry Trump’s false claims could make it less likely that future transfers of power will be peaceful – especially those involving closer margins than 2020, which Biden won by 7 million votes.

“The fact that the Big Lie has taken root the way it has, and that it’s intensified and worsened over the past 12 months, that’s even more dangerous than Jan. 6 itself,” said Ohio State University law professor Edward Foley.

Trump remains highly popular among Republican voters. He has been shaping the field of Republican candidates who will contest the Nov. 8 elections that will determine which party controls Congress and has repeatedly hinted he may run for the White House again in 2024. 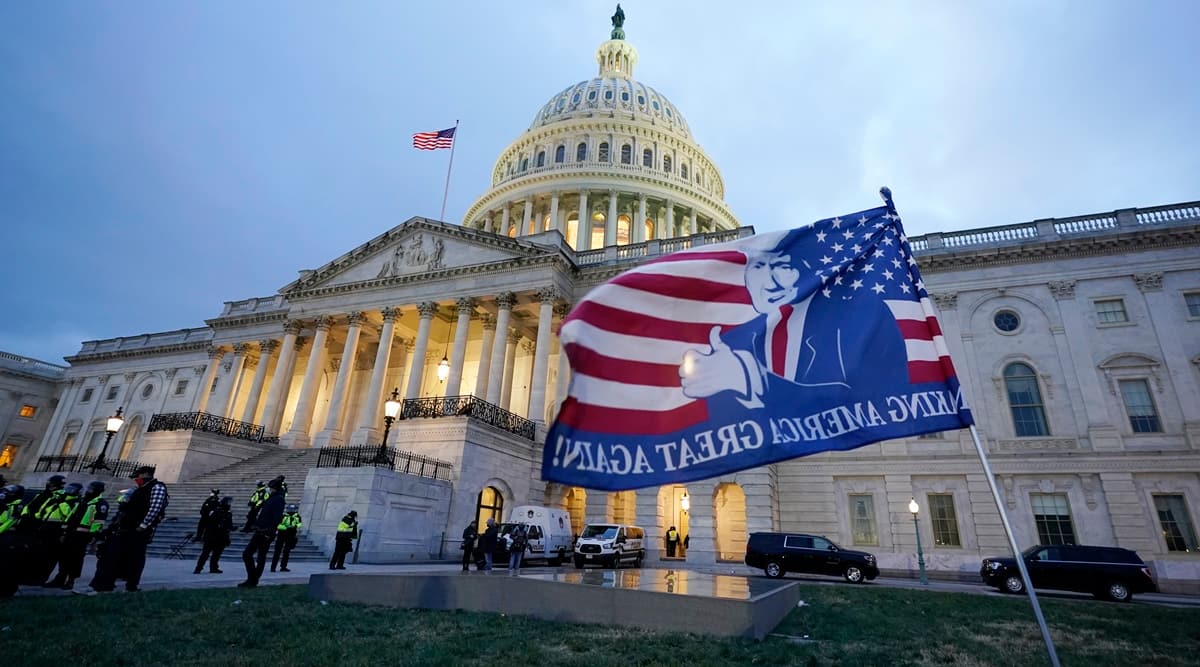 A flag left by supporters of former President Donald Trump outside the US Capitol, Jan. 6, 2021, in Washington. (AP)

On Tuesday, Trump canceled plans to mark the anniversary with a news conference, where he had been expected to repeat his false claims. He plans to speak instead on Jan. 15 at a rally in Arizona.

Most Republican officials and officeholders have remained loyal to Trump. Even after the attack, more than half of Republican lawmakers voted against certifying his defeat, and only a handful supported his impeachment.

Some have sought to play down the attack by likening the rioters to tourists and questioning whether the assault was perpetrated by federal agents.

Those who have called for accountability, including Representatives Liz Cheney and Adam Kinzinger, have been shunned by their colleagues. The two are the only Republicans participating in a congressional investigation that has interviewed more than 300 witnesses so far, including top Trump aides. 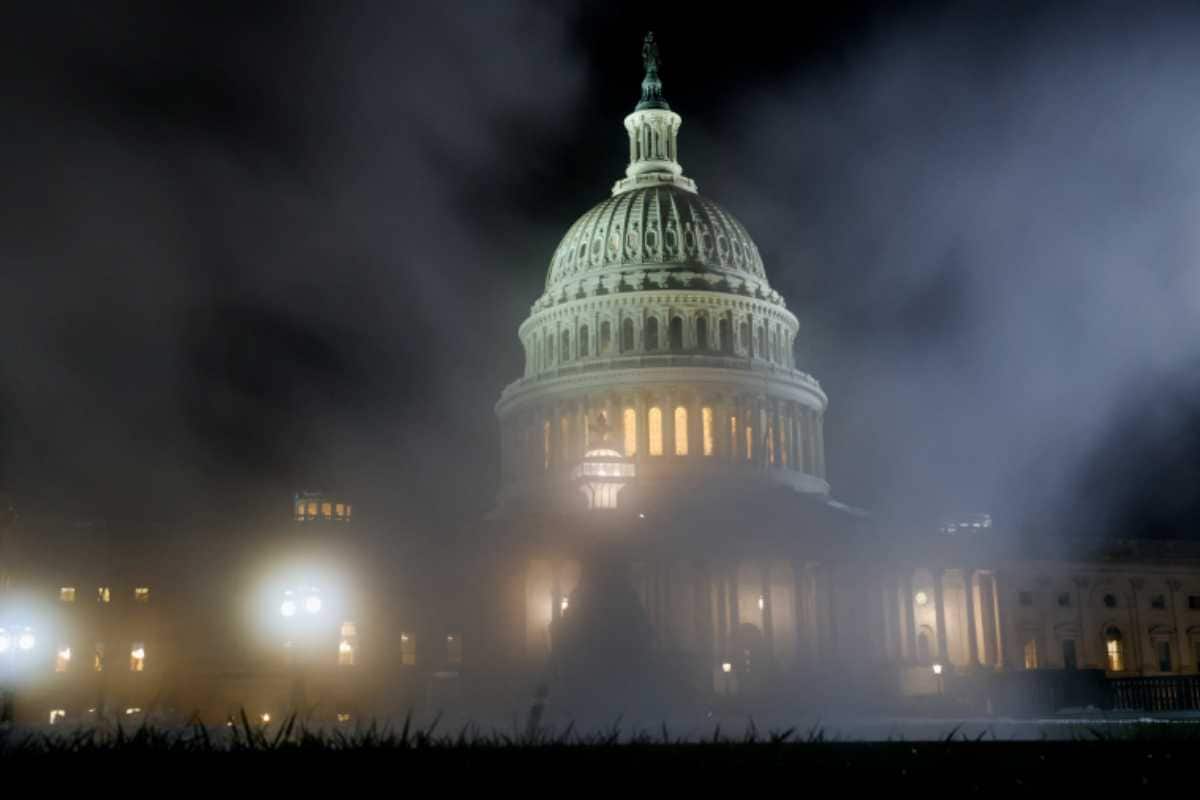 The US Capitol is seen through a steam exhaust on the first anniversary of the January 6, 2021 attack. (Reuters)

US prosecutors have brought criminal charges against at least 725 people linked to the riot, though so far they have not charged Trump or his associates.

Democrats are using the anniversary to push a broad voting-rights bill that they say is needed to counteract Republican efforts to tighten laws at the state level. So far they have been unable to round up enough support to ensure passage in the Senate.

Republicans say Democrats are exploiting the event for partisan purposes.

“It is especially jaw-dropping to hear some Senate Democrats invoke the mob’s attempt to disrupt our country’s norms, rules, and institutions as a justification to discard our norms, rules and institutions themselves,” Senate Republican Leader Mitch McConnell said in a statement.