A handful of new organizations are trying to channel the Brazilian's anger against the government into reinvigorating the country's democracy by luring fresh faces into a political establishment. 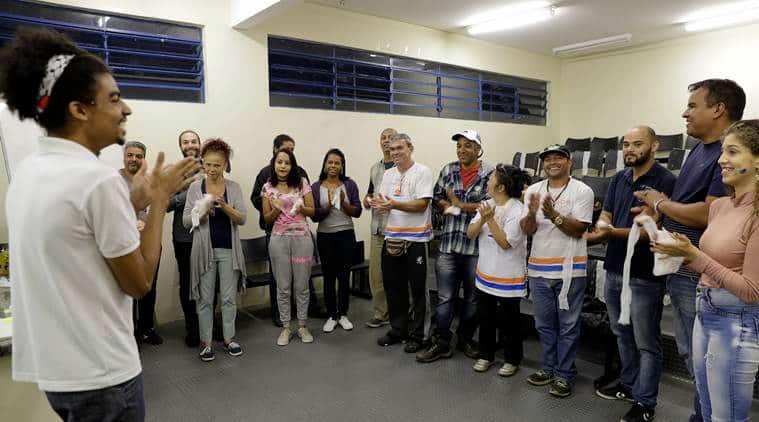 In this November 28, 2017 photo, residents of the low-income Capao Redondo neighborhood and members of the Acredito movement meet to exchange ideas about the community’s needs, in Sao Paulo, Brazil. (Source: AP Photo)

Something in Brazil has snapped. After one of the deepest recessions in its modern history, the largest corruption scandal in Latin America and more than a year under what may be the most unpopular president in the world, Brazilians are desperate for something different _ so desperate that some are calling for the return of a military dictatorship.

But a handful of new organizations are trying to channel that anger into reinvigorating the country’s democracy by luring fresh faces into a political establishment widely seen as closed off and unrepresentative.

“The idea was simple: how to turn indignation into political action,” said Jose Frederico Lyra Netto, a co-founder of Acredito, one of the new non-partisan movements.

Acredito and another group called Agora! hope to each field about 30 candidates in next year’s elections who have never held office before. They’re asking people across the country to help create their platforms by suggesting solutions to Brazil’s thorniest issues: inequality, crime, failing schools and an aging population with a faltering social security system. Their efforts focus on state and federal legislatures.

A third organization, RenovaBR, is offering training and living expenses to about 150 newcomers, who are being selected from thousands of applicants who want to run for office. It says they must commit to close ties with constituents by, for instance, publicly justifying every vote they cast.

The movements are taking aim at a system they say has ceased to represent the Brazilian people.

Even though President Michel Temer’s popularity ratings have dipped close to the margin of error above zero, his allies in Congress have twice been able to block efforts to have him tried on corruption charges sought by federal prosecutors. Many lawmakers are wary of such trials because many of them, too, have been implicated in corruption scandals.

Part of the disconnect between politicians and their constituents stems from the way Brazilian parties now choose _ or exclude _ candidates.

Party leaders keep tight control over who can run, as well as the funds they need to campaign, making it nearly impossible for newcomers who challenge the status quo. Existing politicians often designate a successor _ many times a child or at least a protege, as was the case when former President Luiz Inacio Lula da Silva championed Dilma Rousseff. The byzantine party system and rampant corruption have also turned off many younger Brazilians, leaving the country still largely in the hands of the generation that took power when Brazil returned to democracy in the 1980s.

A new system of public campaign financing favors the big, traditional parties while penalizing smaller ones and newcomers. And independents are banned. That means these new groups will have to negotiate with existing minor parties to put their neophyte candidates on the ballot, and talks have already begun.

The growing fury at traditional politicians has helped lawmaker Jair Bolsonaro, who lauds the country’s 1964-1985 military regime and has been ordered by courts to pay fines for racist, homophobic and sexist comments. He has risen to second place in preference polls ahead of next year’s presidential election.

“This environment is opening a Pandora’s box of very dangerous things,” said Ilona Szabo, who co-founded Agora! and is one of Brazil’s most recognized activists and intellectuals. “We want to offer hope.”

Next year’s elections are wide open due to unprecedented revelations of corruption perpetrated by the country’s elite, new rules that prohibit corporate campaign financing and the possibility that the poll leader, da Silva, could be barred from running because of a corruption conviction.

David Fleischer, a professor emeritus of political science at the University of Brasilia, said he expects about 70 percent turnover in the seats in Congress, up from about 50 percent in a typical election year.

The uncertain atmosphere has many buzzing about the prospects of outsiders, and the new movements have won the backing of big names, such as Luciano Huck, a popular talk-show who is involved with Agora! and Renova.

Eduardo Mufarej, an entrepreneur who is one of Renova’s founders, said those who hope for change can’t just sit back. He said he came at the question of fixing Brazilian politics with “almost a venture capital mindset.”

“If we don’t support people, (a change is) not going to happen by magic,” said Mufarej, who started the investment firm Tarpon Investimentos.

A recent Agora! event in Campo Limpo, a low-income neighborhood of Sao Paulo, underlined the challenges of building a movement from the ground up.

The 15 people who sat in a circle were initially reluctant when asked to talk about problems with Brazil’s education system. But once they got going, it was hard to stop them. The moderator tried to steer the discussion toward solutions _ ideas that could eventually be part of the group’s platform _ but the complaints kept pouring out.

For Cristiane Borges, who attended a recent Acredito event in another low-income neighborhood called Capao Redondo, this process of asking people what they want from their politicians is already a step in the right direction. Brazilians have for too long simply accepted whatever was offered, she said.

“We created this monster by not questioning,” said the 43-year-old who has a small business selling baked goods from her house. “What we can do is get a large group of people together … and make ourselves heard.”