Barr distanced the Justice Department from the report on Trump’s attempts to interfere in the Russia investigation written by the special counsel, Robert Mueller. 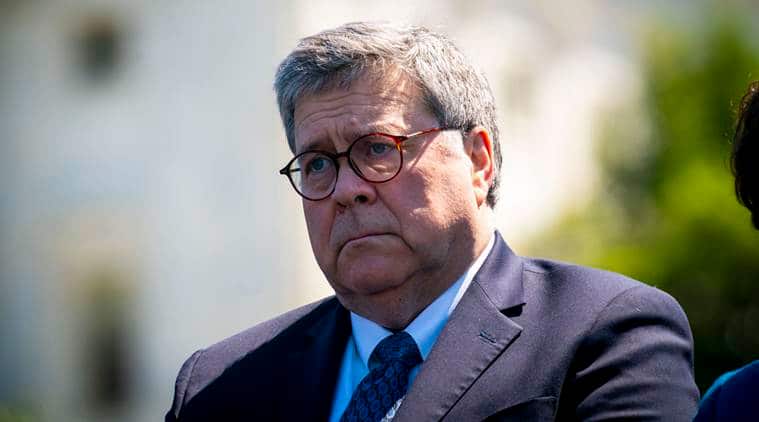 Attorney General William Barr ratcheted up his criticisms of the special counsel’s office and defended President Donald Trump’s actions in a wide-ranging interview broadcast on Friday.

Barr distanced the Justice Department from the report on Trump’s attempts to interfere in the Russia investigation written by the special counsel, Robert Mueller. Barr also said he could have skipped writing his controversial summary of the special counsel’s work if investigators had done more to prepare the report for public consumption.

And in an interview with CBS News from Alaska, where he had visited law enforcement officials, Barr also blamed his decision to release a four-page letter in March summarizing the report’s main conclusions, rather than releasing the report in its entirety, on the special counsel’s office.

Barr said that he had expected the special counsel to identify the material in the report protected by grand jury secrecy rules, so that it could be quickly redacted and the report released. Had that happened, he said that the redaction process would have taken only a few days and his letter would have been unnecessary.

“Once I realized it was going to take three or four weeks, I felt I had to say something in the interim,” Barr said.

The letter he wrote to Congress in March said that the special counsel did not find evidence to establish a conspiracy by anyone on the Trump campaign to help Russia interfere in the election, and that Barr decided that Trump had not committed obstruction of justice, playing down the special counsel’s fuller, more damning portrait of the president’s attempts to impede the inquiry. It largely set the narrative for weeks as the public waited for the report, and Trump often used it in his defense.

Barr also said that Mueller was wrong to not make a decision about whether any of the president’s actions amounted to criminal obstruction of justice, echoing his statement to Congress that Mueller “shouldn’t have investigated” the president if he was not willing to “go down the path of making a traditional prosecutive decision.”

While Mueller said that he was constrained by the Justice Department’s opinion that prosecutors cannot indict a sitting president, Barr countered that he still could have decided whether criminal activity occurred.

“That is what the Department of Justice does. That is why we have the compulsory powers like a grand jury to force people to give us evidence so that we can determine whether a crime” was committed, Barr said.

Nevertheless, Barr said he did not press Mueller on his decision not to reach a conclusion on obstruction, even though he was surprised by it.

Barr has come under fire for his handling of the Mueller report, in particular his decision to clear Trump of any crime. The special counsel said in his report and in his first public comments on the investigation this week that he could not do so.

“If we had had confidence that the president clearly did not commit a crime, we would have said so,” Mueller said.

One comment by Barr raised tensions with his congressional testimony about whose interpretation of the law he had applied to the evidence in pronouncing the president cleared of obstruction.

In Senate testimony on May 1, Barr said that while he disagreed with Mueller that official presidential actions could be obstruction as a matter of law, he had accepted the special counsel’s understanding of the law for his own analysis of the facts. Even so, he said, the evidence fell short of showing a crime.

In his interview with CBS News, Barr said instead that he did apply his own interpretation of obstruction laws when analyzing the evidence.

“But then we didn’t rely on that,” Barr then added, referring to applying his legal theory when deciding that the factual evidence was deficient.

Barr’s claim that as a matter of fact, none of the episodes amounted to obstruction has raised questions because Mueller laid out several where the facts appeared to meet all three criteria for the crime of obstruction, including Trump’s encouraging witnesses like Paul Manafort, his former campaign chairman, not to cooperate with investigators, and his pushing the White House counsel at the time, Don McGahn, to create a document that would contradict his previous testimony that the president had tried to get him to engineer Mueller’s firing.

“Although he then says he did not rely on them, it raises the question: How on earth did his outlandish legal views not affect his analysis of the case?” said Ryan Goodman, a New York University law professor and the co-editor in chief of Just Security, a national security law online forum.

In playing down the Mueller report’s critiques of the president, Barr has also opened himself to attacks that he is aligning himself too closely with a president who has attacked the rule of law and is eroding the Justice Department’s independence.

Barr did nothing to quell those criticisms in the interview, saying that he saw no evidence that Trump had eroded America’s democratic institutions. “One of the ironies today is that people are saying that it’s President Trump that’s shredding our institutions. I really see no evidence of that,” Barr said.

He cast efforts to “stop the president” as an attack on democracy, and said that it was one reason he sought powers to declassify information as he reviews the origins of the Russia investigation. Trump granted him that authority last week, giving Barr significant leverage over the intelligence community.

Barr called the use of foreign intelligence and counterintelligence capabilities against an American political campaign “a serious red line that’s been crossed” and said he believed that the investigative activities directed at the Trump campaign flouted typical procedures.

“The idea of resisting a democratically elected president and basically throwing everything at him and you know, really changing the norms on the grounds that we have to stop this president, that is where the shredding of our norms and our institutions is occurring,” Barr said.

And again raising the possibility that national security officials who did not like Trump had abused their powers in an attempt to influence the 2016 election — a specter he has put forward no facts to support — he argued that such an effort would be just as bad as a foreign power working to manipulate an American presidential election.

“If foreign elements can come in and affect it, that’s bad for the republic,” he said, adding that it is just as dangerous to allow law enforcement or intelligence power “to play a role in politics, to intrude into politics, and affect elections.”

Barr said that some of the facts that he had learned about the origins of the investigation “don’t hang together with the official explanations of what happened,” but would not elaborate. And he said that any failure most likely took place at the upper echelons of the FBI and other intelligence agencies.

On Friday, Rep. Adam B. Schiff, D-Calif., the head of the House Intelligence Committee, sent letters to the heads of the top intelligence agencies asking them to brief him on what requests Barr has made under the May 23 directive granting him the power to declassify government secrets.

Schiff said the director of national intelligence, the CIA, the National Security Agency and the FBI must furnish his committee with all documents and information they hand over to the Department of Justice. He accused Barr of conducting a politically motivated review aimed at undermining the special counsel inquiry into Russian interference.

The review, Schiff wrote, “threatens national security by subverting longstanding rules and practices that obligate” top intelligence officials “to safeguard sources and methods and prevent the politicization of intelligence and law enforcement.”

The director of national intelligence, Dan Coats, did not have an immediate response to the letter, a spokeswoman said. But in the past, intelligence officials have insisted they have a strong record of cooperating fully with congressional requests from their oversight committees.

“Attorney General Bill Barr has disgraced himself by acting like Trump’s personal defense attorney,” Sen. Elizabeth Warren, D-Mass., who is running for her party’s presidential nomination, said on Twitter.