The bus passengers were mainly tourists from regions including Anhui, Shanghai, Shandong and Hebei. 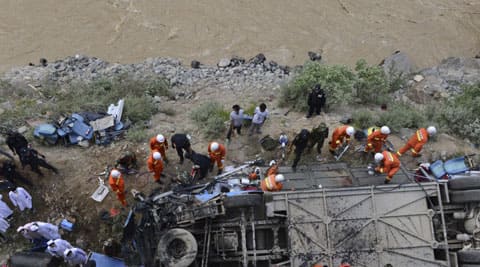 Rescuers work around an overturned tour bus after it fell off a cliff in Nyemo County. (Source: AP)

At least 44 people were killed and and 11 others injured in China when a tour bus plunged into a Tibetan valley after a three-vehicle pile-up.

“The 55-seat bus carrying 50 people fell off a 10-metre-plus-high cliff after crashing into a sports utility vehicle and a pick-up truck,” state-run Xinhua news agency reported on Saturday.

Another five people were in the other vehicles in the accident which happened at around 4:25 pm (0825 GMT) in Nyemo County, west of the capital Lhasa, in the Tibet Autonomous Region.

The bus passengers were mainly tourists from regions including Anhui, Shanghai, Shandong and Hebei.

The injured, with no life-threatening injuries, were being treated at hospitals in Lhasa.

An investigation into the cause of the accident is under way.

Police have detained managers of the Feixiang Travel Agency and the Shengdi Vehicle Tour Company blamed for the accident.

The regional government has held an emergency meeting, ordering a general overhaul of road safety and travel safety across the region to avoid similar fatal accidents.