Khaleda had said that her husband Ziaur Rahman was the first president of the country and the proclaimer of the independence from Pakistan. 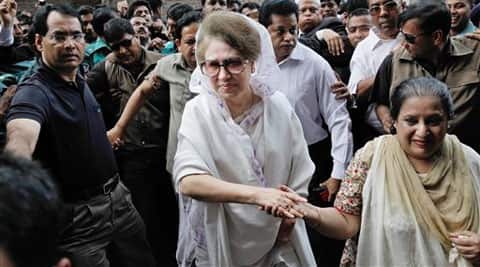 In this March 19, 2014 photo, former Bangladeshi prime minister Khaleda Zia, center, arrives to appear before a court in Dhaka. (AP)

A Bangladeshi court on Monday rejected a libel suit filed against former premier Khaleda Zia on charges of “distorting the history” by claiming that her late husband Ziaur Rahman was the nation’s first president.

Dhaka’s Chief Metropolitan Magistrate Shamsul Arefin said the petition against Zia, the chairperson of the main opposition Bangladesh Nationalist Party (BNP), lacked substantial elements and could not therefore be accepted as a case.

On March 27 at a discussion on the Independence Day, 68-year-old Zia had said that her husband was the first president of the country and the proclaimer of the independence from Pakistan.

Siddique had also sought an arrest warrant against Zia, the archrival of Prime Minister Sheikh Hasina and daughter of Mujibur Rahman.

BNP’s founder General Ziaur Rahman emerged as the strongman of Bangladesh after the August 15, 1975 coup, in which Mujibur Rahman was assassinated along with most of his family members.

Ziaur Rahman was killed in another coup in 1981.

“When real and true history is written, it will say Ziaur Rahman proclaimed our independence as the first president of Bangladesh,” Zia had told the party.

Her comments came a day after her elder son Tarique Rahman, who took refuge in London to evade justice in a number of criminal and graft cases, made the identical claim that his father was the first president as he had drafted the declaration of independence.

Yesterday’s Parliament session saw a heated debate over the claims and several MPs were in favour of charging Zia with sedition.

Both the treasury and opposition benches demanded Zia be summoned to face defamation motion for the comments.