Amid Israeli blockade on Gaza, a fishing fleet limps along

For Gaza’s fishermen, the blockade has ended the ability to buy motors, propellers, fibreglass and many other items needed to repair the boats and maintain a functioning fishing fleet. 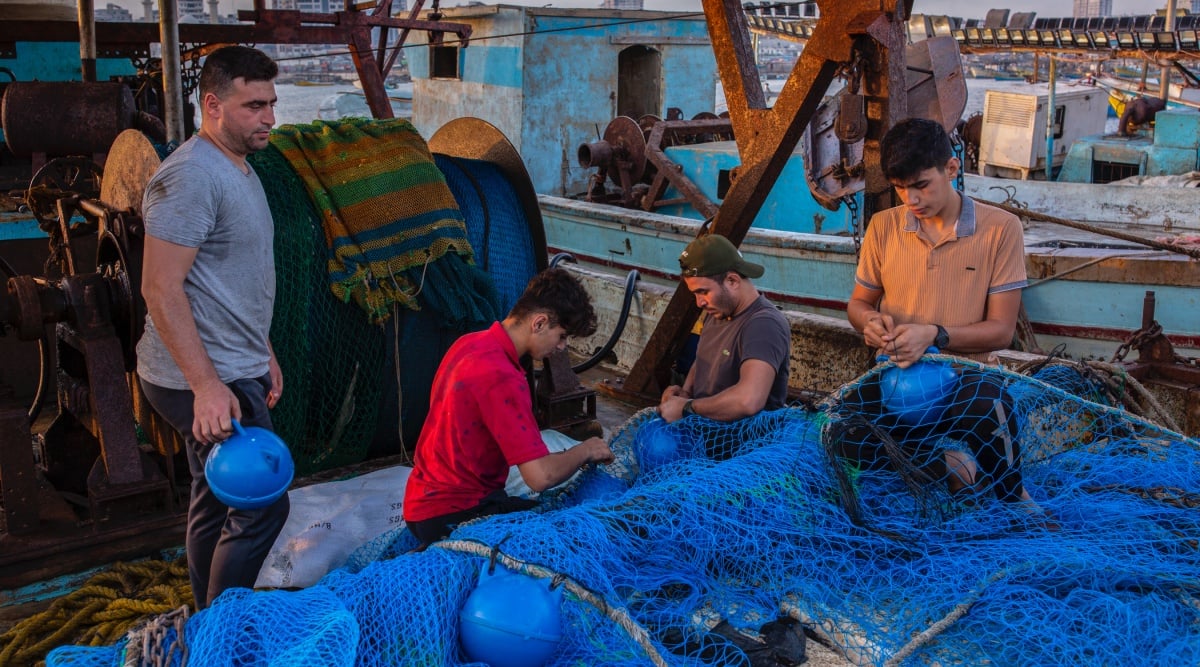 Palestinians mend their fishing nets at a port in the Gaza Strip, July 29, 2022. An Israeli blockade that restricts the movement of Gazans out of the strip, and limits or bans imports, has been devastating for the enclave’s fishing industry. (Samar Abu Elouf/The New York Times)

Not far from the edge of the port in the Gaza Strip lies its boat cemetery: two rows of beached fishing vessels that even Gazan ingenuity cannot salvage.

Motors and propellers have been stripped. The once-bright blue, green and yellow paint on more than two dozen fishing boats is peeling. The fibreglass on some looks as if it has been eaten away.

The boats began piling up in Gaza 15 years ago after Israel, aided by Egypt, imposed a land, air and sea blockade on the small Palestinian coastal enclave in 2007. The blockade severely restricts the movement of Gazans out of the strip and limits imports or bans them completely, including medical equipment and construction material.

For Gaza’s fishermen, the blockade has ended the ability to buy motors, propellers, fibreglass and many other items needed to repair the boats and maintain a functioning fishing fleet. It has damaged a vital but shrinking part of the strip’s economy while crimping the supply of an important but increasingly out-of-reach part of the local diet. 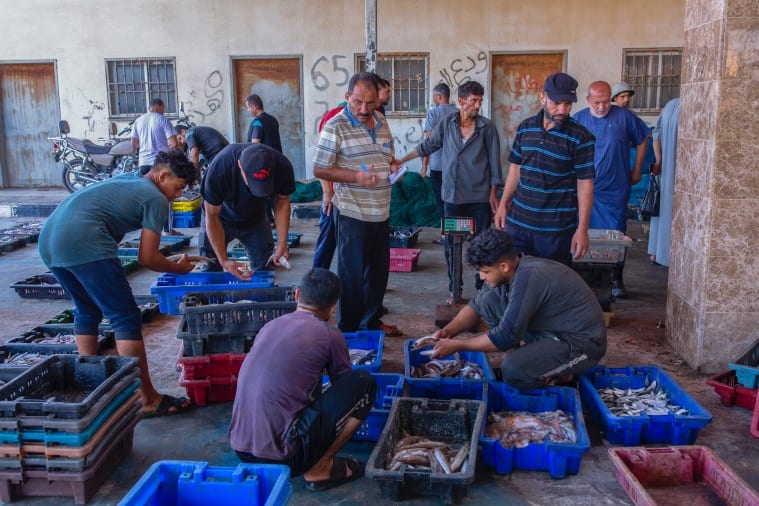 Repairs and maintenance that were once easy and affordable became too costly or scarce, causing some fishermen to just give up and dump their unsalvageable boats in the cemetery.

“This is a war on our livelihoods,” said Miflih Abu Rial, a fisherman and official in the fishermen’s union, standing on the bow of one of his family’s boats, which has been in the cemetery for years.

Gazan and industry officials warn that if Israeli restrictions are not eased, the strip’s fishing sector could completely collapse in the next few years as more and more boats are removed from service.

Israel says the blockade and restrictions are for its security and intended to prevent Hamas, which controls Gaza, and other militant groups from using “dual use” items — products that Israel says can be used for both civilian and military purposes. 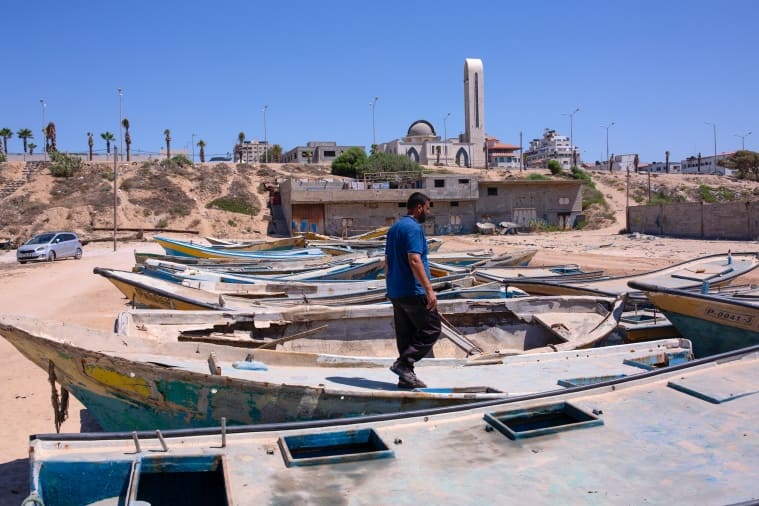 A cemetery of boats, stripped of otherwise unavailable parts to keep other boats working, at a port in the Gaza Strip, July 25, 2022. (Samar Abu Elouf/The New York Times)

“Some items that serve the fishing industry are defined as dual-use materials,” the Civil Administration, the Israeli authority that carries out civilian policy in occupied territories under the command of the military, said in a statement.

Israel’s blockade has devastated Gaza’s economy, in which poverty is widespread and unemployment hovers around 50%. Palestinian officials and human rights groups have long maintained that the blockade amounts to collective punishment of Gaza’s 2 million residents in the densely packed enclave.

“The fishing sector now works at 50% capacity and every day it is decreasing,” said Jehad Salah, head of the fisheries directorate in Gaza. “When they ban the equipment needed for maintenance, then they are forcing people to leave this industry.”

A United Nations-initiated program to allow maintenance and repair materials to be sent in was finally just put into place after months of negotiations, a U.N. official said.

The agreement allows individual fishermen to request orders of dual-use materials needed to repair their boats. Each request must be approved by both the Palestinian and Israeli sides.

Once it is approved, fishermen can place the order, and the importation and distribution of the materials will be overseen by the United Nations.

Only a few dozen have had their orders approved so far.

On Nov. 13, the first batch of materials entered Gaza, the first since 2007, a shipment that included 500 pounds of fibreglass, 1,100 pounds of polyester resin and a total of 70 pounds of blue, white and yellow paint.

Next month, motors will be allowed in, Salah said. He added that he was withholding judgment on the program’s success.

The Israeli civil administration said the materials will be brought in under strict security and supervision.
For Gaza’s fishermen, the negative effect of the blockade is multifold. In addition to the limits on goods coming in, the naval blockade restricts how far out into the Mediterranean Sea fishermen can go and thus how much and what types of fish they are able to catch.

Fishermen are at risk of being shot at by the Israeli coast guard and being detained or having their boats confiscated by Israel if they get too close to the boundaries of the permitted fishing areas. There have been more than 300 shooting episodes this year, according to the United Nations, with 14 fishermen injured. At least 47 have been detained by Israel.

With little relief from the blockade, Gaza’s boats limp along, kept semi-functioning by a combination of salvaged used parts from other vessels, modified car and truck parts that are not made to be in the salty sea, and occasionally smuggled items.

But the black market mostly dried up after President Abdel-Fattah el-Sissi of Egypt cracked down on smuggling tunnels between his country and Gaza.

In June 2016, brothers of Abu Rial, the fisherman, were on one of eight boats owned by their family when it was seized at sea by Israeli forces. The boat was returned to them nearly two years later but needed extensive repairs to make it seaworthy again. Family members did not have the money, nor could they find the necessary parts, so the boat was put in the cemetery.

Now Abu Rial, 44 and a third-generation fisherman, uses another aging boat with a motor that has been on its last legs for the past two years. Sometimes the mechanic must fix it three times a week. Other times, Abu Rial goes weeks without fishing because the motor will not work.

Recently, he had to sell some of his wife’s gold jewellery to pay bills.

“After I get the motor fixed, I just pray that it will last a week or even a day,” he said, standing outside his family’s storage room at the port.

Farther down the port, along a breakwater built using rubble from previous wars in Gaza between Hamas and Israel, Methat Redwan Bakir’s boat has been tied up for years.

“The Israelis took it for three years and returned to me with no nets and no engine and no lights,” he said. “It hasn’t moved since it came back.”

Bakir’s brother and 11 other fishermen were on the boat in 2016 along the northern fishing limit when they were shot at by the Israeli Coast Guard, which also fired water cannons at the vessel, he said. The boat was confiscated and all 12 crew members detained. Ten of them were released the next day, and Bakir’s brother was detained for 18 days before being let go. Another man was imprisoned for five years.

For decades, the boat supported five families on which they could make up to $1,000 a day from fishing.
It would have cost Bakir, 57, a father of four daughters, several thousand dollars to fix. So he tied it up and abandoned it.

In the green murky waters nearby, Bakir watched as a group of young men learned the trade, working to unravel fishing nets and preparing to go out to sea. But it remains unclear how long this industry can survive here.

Now, Bakir goes out on a 6-meter-long flat-bottomed boat with a 20-year-old motor that breaks down as often as it works. And instead of using nets, he relies on a rudimentary mix of equipment: fishing rods, plastic bottles and multiple baits.

With a dwindling number of functional motors in Gaza, more and more fishermen are using paddle boards to continue their trade. On any morning, men standing atop wide two-person boards, loaded with nets, can be seen going out to sea.

“The paddle board is a new thing, but it is very dangerous,” said Salah, the fisheries director.
Ashraf Al-Aawoo, 47, had been using a paddle board for months after his boat fell into disrepair.
But one day in the spring, he and a partner found the fish plentiful. The net bulged with fish but the paddle board could not take the heavy weight and sank.

Al-Aawoo, deeply tanned from a lifetime on the water and under the sun, had to swim more than a mile back to shore with his fellow fishermen.

The Gazan coast guard fished the paddle board out of the water.

Even if he had the money to repair it, there is not any fibreglass in Gaza to buy, Al-Aawoo said.
In frustration, he dragged the board from the sandy shore to the entrance of the port and left it on the road shoulder as a statement — like a sole cemetery plot for another Gazan boat.

How free is the press in the birthplace of democracy?