Thousands of families from the Yazidi minority community were trapped on the mountains without food and water. 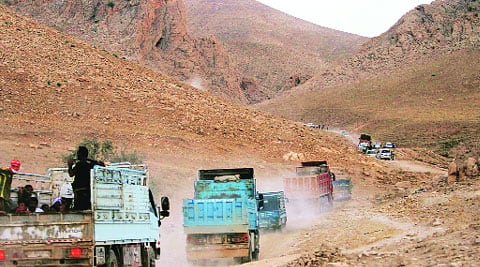 Displaced Yazidis ride trucks as they are evacuated from Mount Sinjar in Iraq Thursday. ( Source: Reuters )

US President Barack Obama Thursday said the successful American military air strikes and humanitarian mission in the last few days had broken the Islamic State of Iraq and Syria’s siege on Iraq’s Sinjar mountain where thousands of refugees were trapped.

“The situation on the mountain has greatly improved and Americans should be very proud of our efforts. Because of the skill and professionalism of our military and the generosity of our people, we broke the ISIS siege of Mount Sinjar, we helped vulnerable people reach safety and we helped save many innocent lives,” Obama said in his remarks to the press at his vacation home in Martha’s Vineyard in Massachusetts.

“Because of these efforts, we do not expect there to be an additional operation to evacuate people off the mountain and it’s unlikely that we’re going to need to continue humanitarian airdrops on the mountain. The majority of the military personnel who conducted the assessment will be leaving Iraq in the coming days,” Obama said.

Over the last week, the US military conducted humanitarian airdrops every night, delivering more than 114,000 meals and 35,000 gallons of fresh water. The US was joined in this effort by Britain and some other allies.

Thousands of families from the Yazidi minority community were trapped on the mountains without food and water after fleeing the rampaging fighters of the ISIS.

US military was able to successfully strike ISIS targets around the mountain, which improved conditions for civilians to evacuate the mountain safely, he said.

A small team of Americans – military and civilian – Wednesday completed their review of conditions on the mountain, Obama said, adding that they found that food and water had been reaching those in need and that thousands of people have been evacuating safely each and every night.

“The civilians who remain continue to leave, aided by Kurdish forces and Yazidis who are helping to facilitate the safe passage of their families,” he said.

The US, he said, will continue airstrikes to protect its people and facilities in Iraq. The US has also increased the delivery of military assistance to Iraqi and Kurdish forces fighting ISIS on the front lines.

Return of the House