The motion authorizes air strikes in Iraq for up to six months and explicitly states that no ground troops be used in combat operations. 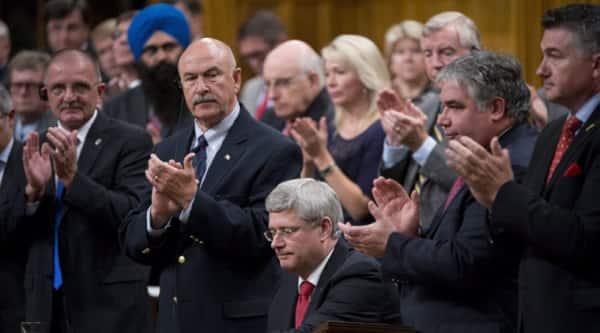 Canadian Prime Minister Stephen Harper is applauded after speaking on the government’s motion on a combat mission in Iraq following Question Period in the House of Commons in Ottawa on Friday, Oct. 3, 2014. (Source: AP)

Prime Minister Stephen Harper’s Conservative Party introduced the motion last week and it was debated this week. Harper has a majority of seats in Parliament so the vote was all but assured. The motion passed 157-134.

The motion authorizes air strikes in Iraq for up to six months and explicitly states that no ground troops be used in combat operations.

The combat mission includes up to six CF-18 fighter jets, a refueling tanker aircraft, two surveillance planes and one airlift aircraft. About 600 airmen and airwomen will be involved. Canadian Prime Minister Stephen Harper speaks about the government’s motion on a combat mission in Iraq following Question Period in the House of Commons in Ottawa on Friday, Oct. 3, 2014. Canada plans to launch airstrikes against the Islamic State militant group in Iraq following a U.S. request and may extend airstrikes into Syria if invited by President Bashar Assad’s government, Harper announced. (Source: AP)

Canada is among dozens of countries that have joined the U.S.-led coalition fighting the Islamic State militant group.

“The threat posed by ISIL is real,” Harper said in a statement, referring to the Islamic State by one of its acronyms.

“If left unchecked this terrorist organization will grow and grow quickly. They have already voiced their local and international terrorist intentions and identified Canada as a potential target.”

“Canadians and Americans have fought alongside each other in several major conflicts over the past century, and we are grateful for Canada’s further contribution against terrorism,” a White House statement said.

Canada has more than two dozen special forces advisers already in Iraq and has plans for up to 69 advisers as part of an effort to advise Kurdish forces against Islamic militants after a request from President Barack Obama. The U.S. followed that up with another request for an air combat role.

Although the mission didn’t need parliamentary approval, the government submitted it to a vote to show consensus.

Harper’s government won the support of the opposition parties for air strikes in Libya in 2011 but not for this mission. Opposition New Democrat leader Thomas Mulcair said the Conservatives are plunging Canada into a prolonged war without a credible plan to help victims of Islamic State terror.

Canada’s former Liberal government refused a request to send troops when the U.S. invaded Iraq in 2003, straining ties between the two neighbors. Canada then stepped up its Afghanistan mission.

Harper formally ended Canada’s combat role in Afghanistan in 2011. The mission cost 157 soldiers their lives since 2002, shocking Canadians unaccustomed to seeing their troops die in battle.