‘Giant can of worms’: Some Afghans leave US military bases before resettlement

The phenomenon is raising alarms among immigration advocates concerned about the risks to Afghans who give up on what is now an open-ended, complex and completely voluntary resettlement process. 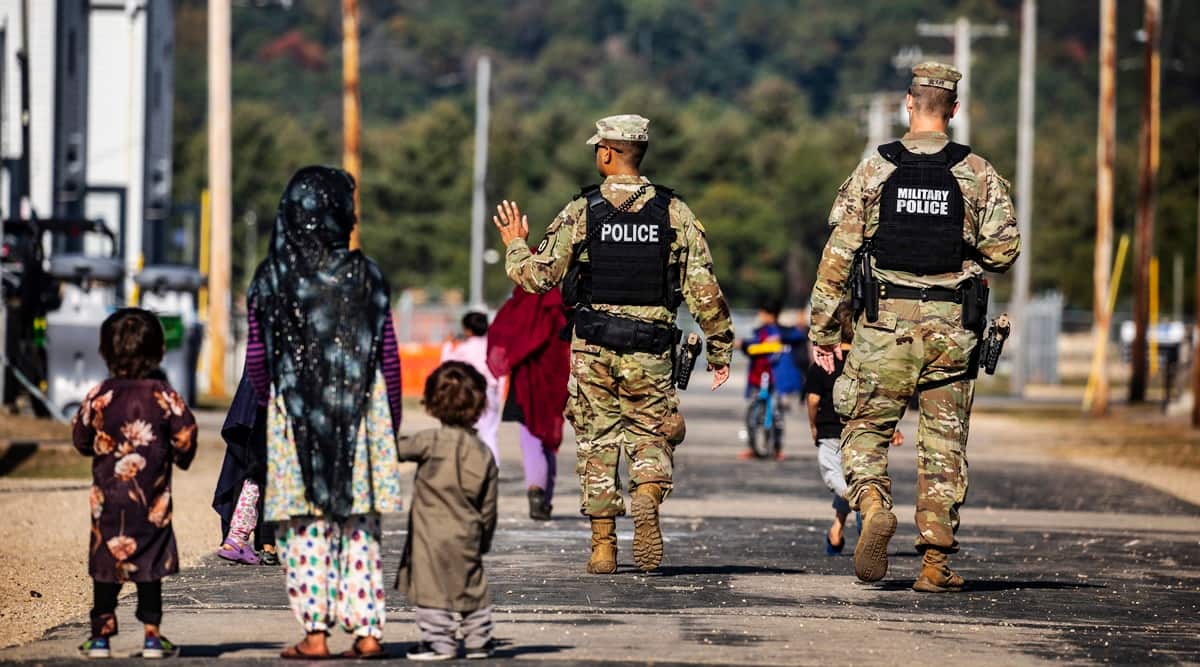 US Military Police walk past Afghan refugees at the Village at the Ft. McCoy US Army base on Thursday, Sept. 30, 2021 in Ft. McCoy, Wisconsin. (AP)

Something unexpected is happening at US military bases hosting Afghan evacuees: Many hundreds of them are simply leaving before receiving US resettlement services, two sources familiar with the data told Reuters.

The number of “independent departures,” which top 700 and could be higher, has not been previously reported. But the phenomenon is raising alarms among immigration advocates concerned about the risks to Afghans who give up on what is now an open-ended, complex and completely voluntary resettlement process.

In the speed and chaos of the US withdrawal from Afghanistan in August following 20 years of war, many evacuees were brought into the United States under a temporary status of “humanitarian parole.” Once transferred to US military bases, refugee resettlement groups and US officials have been trying to connect people with services for a smooth transition to the United States.

In a statement, a US Department of Homeland Security (DHS) spokesperson declined to comment on the figures provided to Reuters by sources but said people who had left the bases “generally” had ties to the United States, like family members or friends, and resources to support themselves. Members of the US military and Afghan refugees play soccer at the Fort McCoy US Army base on Thursday, Sept. 30, 2021 in Fort McCoy, Wisconsin. (AP)

The spokesperson said that in addition, at the outset of the operation many of those evacuated were US citizens, permanent residents or had approved Special Immigrant Visas so were able to depart quickly.

But leaving early could cost other Afghan evacuees critical benefits – like expedited work permits – and create a slew of legal problems down the road, given the complexities of the US immigration system.

“It’s a giant can of worms,” said one US Citizenship and Immigration Services official, who spoke on condition of anonymity.

“This could lead to years and years of terrible immigration status problems.”

The benefits the evacuees have received have been more limited, so far, than what’s offered to refugees. But that appears set to change following legislation passed on Thursday by Congress – despite opposition from Republicans – that would give Afghan evacuees the more extensive assistance usually provided to refugees. Afghan refugee girls watch a soccer game from a distance near the Village at the Ft. McCoy US Army base on Thursday, Sept. 30, 2021, in Ft. McCoy, Wisconsin. (AP)

“We should do everything in our power to help our Afghan allies get off to a strong start in their new homes,” Democratic Senator Jeff Merkley said in a statement.

The new legislation says Afghan asylum applications should be expedited. But those who leave US bases early might not get all the legal orientation they need start their applications.

Immigration experts say Afghans who leave the bases are not breaking US laws and military officials have no legal authority to hold law-abiding Afghans against their will at any of the eight locations hosting 53,000 Afghans who fled the Taliban on US evacuation flights.

The scale of the independent departures vary from base to base, according to the sources – more than 300 alone at Fort Bliss in Texas – a figure that is likely to alarm both advocates and critics of the massive US resettlement operation. 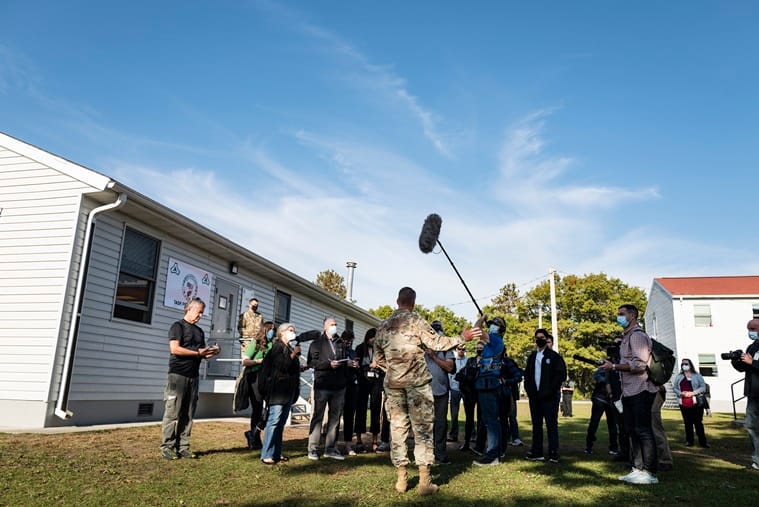 A member of the military speaks to reporters as media visit Fort McCoy US Army base on Thursday, Sept. 30, 2021 in Fort McCoy, Wisconsin. (AP)

However, US officials stress that all of the Afghans leaving US bases had already undergone security screening before arriving in the United States. The risk of the independent departures is to the Afghans themselves.

Reuters viewed a document, entitled “Departee Information,” that is meant to warn Afghans considering leaving before completing their resettlement. It reminds them that, on base, they can get their immigration paperwork processed and even cash to help pay for travel to their destination in the United States.

“Once you leave this base, you forfeit these advantages and may not return,” it reads.

Margaret Stock, an immigration lawyer with expertise in cases related to the military, said the warning was not ill-intentioned. 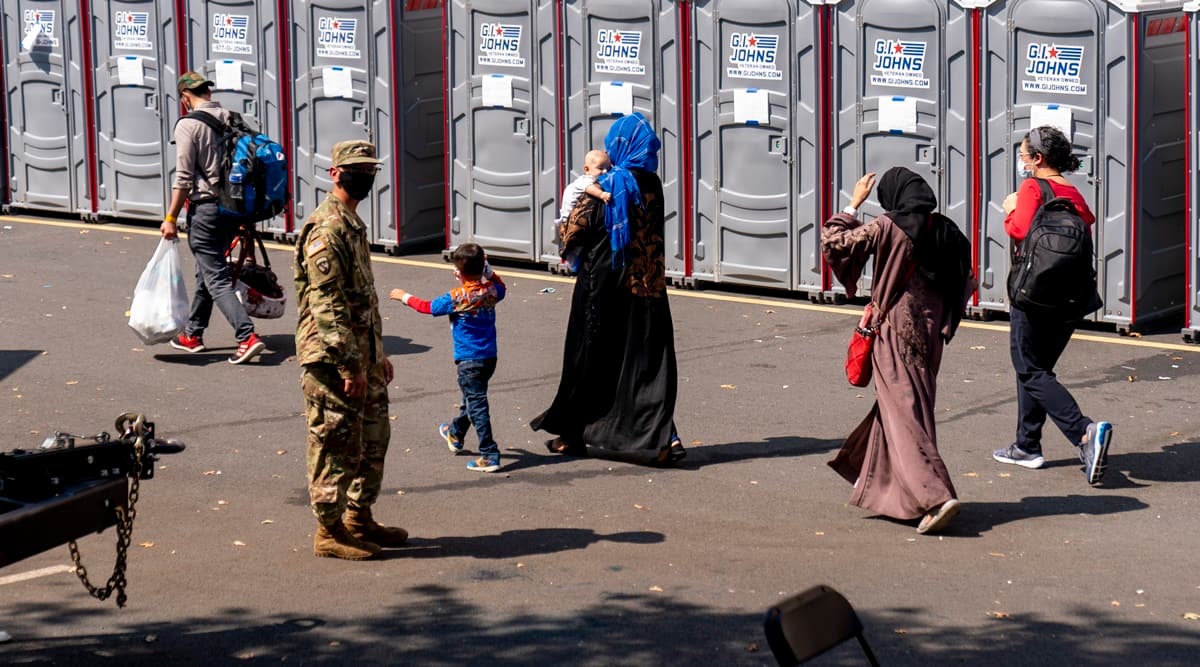 Afghanistan refugees arrive at a processing center in Chantilly, Va., Monday, Aug. 23, 2021, after arriving on a flight at Dulles International Airport. (AP)

“I think they’re trying to look out for people,” she said.

“The people managing the bases are rightfully concerned that somebody might not be fully aware of the consequences of wandering off.”

Afghans leaving US bases can be a touchy issue in some parts of the country, particularly given media coverage of security incidents at Fort McCoy, in Wisconsin, and Fort Bliss.

But General Glen VanHerck, head of Northern Command, pushed back on the idea that criminality was a problem on the US bases. He told Pentagon reporters on Thursday that the numbers of incidents involving robbery and theft were substantially lower than in the general US population, with only eight cases in six weeks.

Asked what was the limiting factor in getting Afghans processed for resettlement, VanHerck said it was not vaccinations against measles or the coronavirus or security checks.

Instead, it was efforts by US officials to ensure “each of the Afghan guests have a great place to land and have assurances for where they’re going to relocate to.”

“So I understand that, right now, is the limiting factor on output,” he said.

‘Take your time’: Cardi B gets real about her post-birth body