Who is Nambi Narayanan?

While working at ISRO, Narayanan was accused of selling vital secrets associated with Indian space technology to Pakistan. Though he was later acquitted by a CBI court and the Supreme Court in 1998, he spent a total of 50 days in jail along with fellow scientist D Sasikumar and four others. 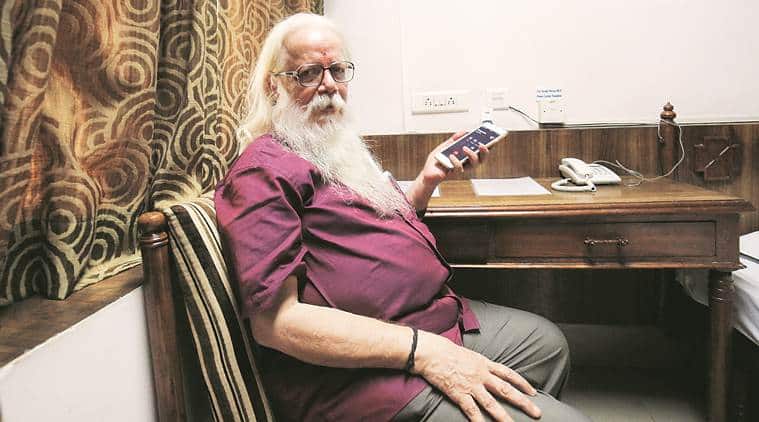 While working at ISRO, Narayanan was accused of selling vital secrets associated with Indian space technology to Pakistan. Though he was later acquitted by a CBI court and the Supreme Court in 1998, he spent a total of 50 days in jail along with fellow scientist D Sasikumar and four others.

Narayanan, in an excerpt of his autobiography Ormakalude Bhramanapatham’ (Orbit of memories) published on IEMalayalam.com, penned down his difficult times when he was falsely implicated in the spy case.

In ansnippet from his book, he paints the spy case as a conspiracy against him and the ISRO through the collective efforts of agents of the US Central Intelligence Agency (CIA) in connivance with Indian police and intelligence officers. The case was produced out of thin air in order to stall India’s rapid advancements in the development of an indigenous cryogenic rocket engine, he said in the book.

Working as the in-charge of the cryogenics division at ISRO, Narayanan foresaw the need for liquid fuelled engines for ISRO’s future civilian space programmes and introduced the technology in India as early as the 1970s. The same technology which later he was accused of selling.

In 1992, ISRO finalised a deal with Russia for transfer of technology to develop cryogenic-based fuels. However, due to pressure from US and France on Russia, the deal was called off. Nonetheless, a new agreement with Russia was signed to fabricate four cryogenic engines without a formal transfer of technology. Tenders were floated and a consensus had already been reached with Kerala Hitech Industries Limited (Keltch) which would have provided the cheapest tender for fabricating engines. But, at the peak of his career, the scientist got stuck in the ‘ISRO spy case’.

in October 1994, Kerala police in Thiruvananthapuram had registered a case against Mariam Rasheeda, a Maldivian national, under Section 14 of the Foreigners Act 1946 and Section 7 of the Foreigners Order, 1948.

The initial charges against her were of overstaying in India following the cancellation of her flight to Maldives. Following her interrogation, the police made out a case that she had contacted ISRO space scientists who were suspected of having transferred cryogenic engine technology to Pakistan through her. And the following month, the police arrested Narayanan and another ISRO scientist, D. Sasikumaran.

The police case was that Narayanan and Sasikumaran had passed on secret documents to other countries, especially Pakistan. The arrested scientists were grilled by Intelligence Bureau sleuths, including Gujarat-cadre IPS officer R B Sreekumar, who was then IB additional director in Kerala.

READ| How a scientist cleared his name and continues to fight

Within 20 days of the case being registered, the probe was handed over to the CBI. In 1996, it submitted its closure report in the chief judicial magistrate’s court in Kochi, saying that the allegations of espionage were unproven and false. The court admitted the closure report, leading to the discharge of all those who had been implicated.

In 1996, CPI (M) led government tried to reinvestigate the case, which was later quashed by the Supreme court on the scientists’ appeal.

The case cost the 76-year-old former ISRO scientist his career and over two decades of his life and academic work.

On Friday, the Supreme Court awarded Rs 50 lakh compensation to former ISRO scientist Nambi Narayanan, saying he was “unnecessarily arrested and harassed” by the Kerala Police. The top court has set up a committee under Justice DK Jain to look into Narayanan’s complaint against police officers who framed him. The Centre and state will nominate a member each to the committee.

Volkswagen to stop rolling out Beetles: A look back at the iconic car’s history